We arrived at Sibiu on a cheap flight we found for August (2018). In Sibiu we stayed at an Airbnb apartment (Link to 30-euro coupon on your first Airbnb booking), Then went on to spend three nights in another apartment at Gura Raului village. A village about half an hour drive away. You can reach it by train, but the area is hard to get around without a car, so I would recommend making the trip with a rental car. We found a vehicle though Rentalcars website, and the lease was from the Autonom company.

We made the trip to Romania after a luxurious cruise in the Adriatic Sea, so we decided to make our trip to Romania on a low budget. We wanted a rural trip with a lot of nature, and that’s what we ended up getting.

If you’re traveling to Sibiu for more than two-three days, I’d recommend renting a car and traveling the surrounding area – Since it’s really magical. Another recommendation is to sleep in the adjacent villages, to enjoy the authentic, local experience.

The apartment we stayed at in the village

We found this apartment through the Airbnb website, and honestly (Link to the apartment), we picked it due to its low cost (About 20 euros a night) and because it seemed to offer a beautiful view. It turned out to be one of the most magical apartments we ever had the pleasure of staying at, mostly because of its well-tended garden and the stunning, green views it offered. Additionally, the village itself is really charming and has a grocery store within walking distance of the apartment. There is also a great restaurant in the village, an 8-minute drive away and a supermarket right by the restaurant (Map to the supermarket).

Information regarding the apartment

The apartment itself is located in a compound with several apartments belonging to the family. It is a two-floor apartment, with two bedrooms on the second floor, one with two single beds and the other with a double bed and a small balcony with a beautiful view of the mountains.

There’s also a bathroom with a shower. On the first floor is the living room, food area and another bathroom. The adjacent house has a giant shared kitchen (We didn’t get to see anyone else there and were always alone in it), as well as a giant, well-tended garden with many flowers and a pagoda area with a table, chairs and swing. There’s also a cute little dog named Toto who will always come out to greet you.

The apartment doesn’t have an air conditioner, only heating. Before our arrival I was somewhat worried about that part, since it was the middle of august, but the owner told us the apartment itself is pleasant and cool and so it was. At night we slept with a blanket on and even wore a jacket in the evenings, since it got chilly. 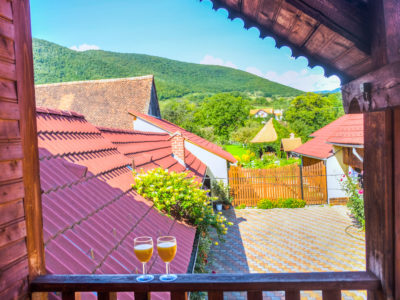 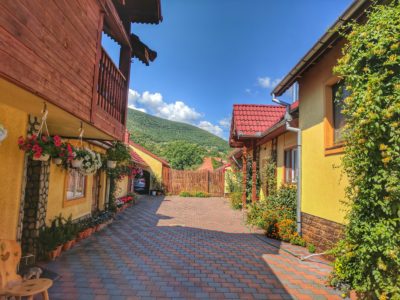 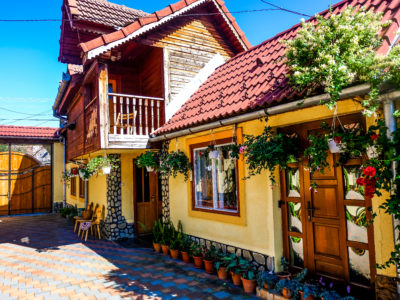 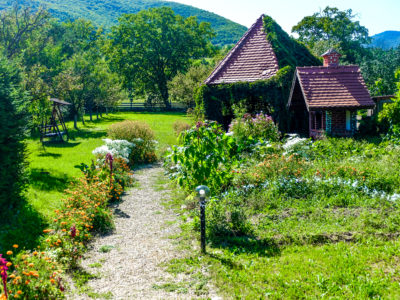 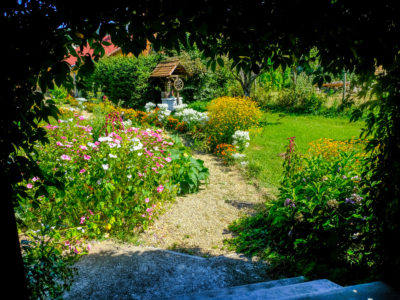 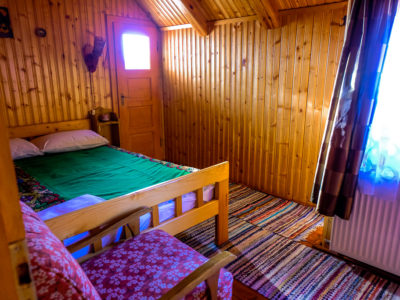 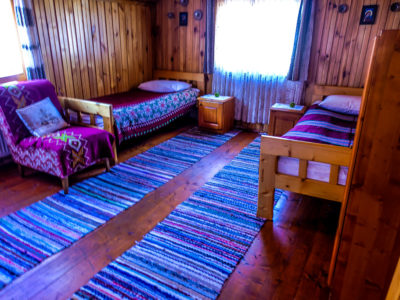 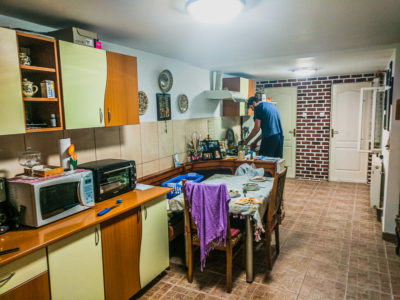 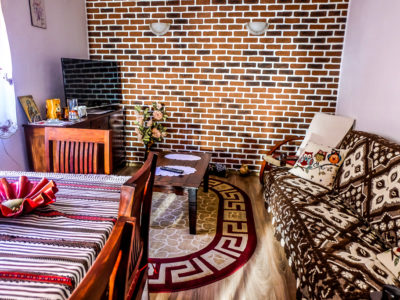 Picnic in the garden

Before going to Gura Raului, we passed through a local produce market in Sibiu, which is open on Fridays between 10:00 and 13:00. We bought cheeses, fruit, vegetables and honey. We also bought bread and ham at the store next to our apartment. It turned out to be a great purchase, since the apartment’s garden is perfect for a fun picnic. We took the picnic photos on a sheet in the middle of the garden, but afterwards sat down to eat under the pagoda and it was great. 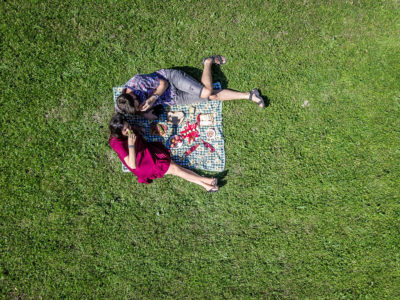 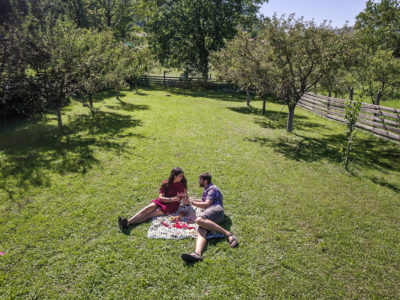 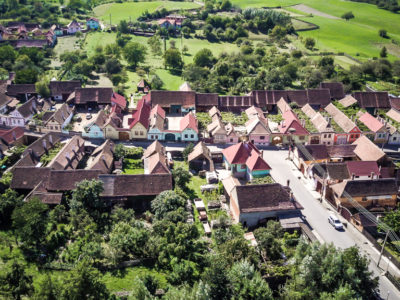 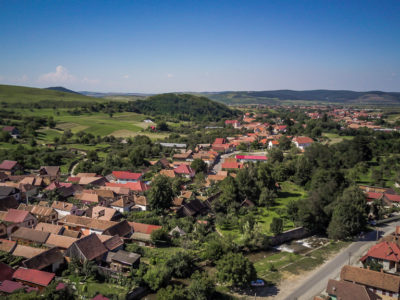 Restaurant for dinner in the adjacent village

We spent three nights at the apartment, on two of them we cooked dinner at home, and on the other we decided to go have dinner at a restaurant. There aren’t many options of dining in the area, so we chose the restaurant based on the best looking google photos.

The restaurant we ate at is called Conacul Maria Theresa, address: nr. 632, Strada Victoriei, Orlat 557170, Romania. (Map)
We came there for dinner and sat outside. It was a very pleasant and even a bit chilly, despite it being the middle of august. We ordered two glasses of white wine and for starters Roman had Ciorba soup, while I ordered a trio of salads – Grilled eggplant, roasted pepper salad and a potato salad (Russian styled).

We were also served fresh bread along with our food. For mains, Roman ordered ribs served with potatoes and I ordered fillet of beef, also with potatoes. All the dishes were really good, and the atmosphere was nice. The service was a bit slow, since all the tables were packed, but it didn’t hurt our experience and we had a great time. 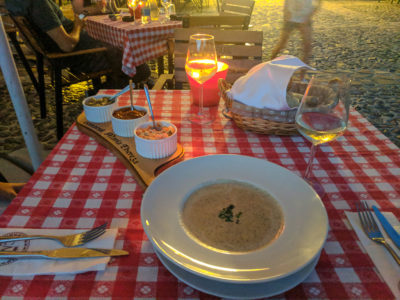 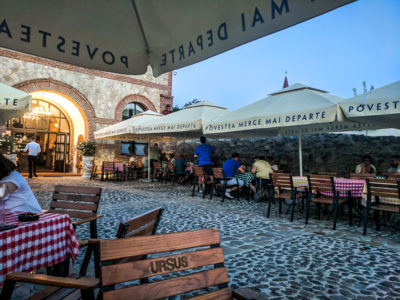 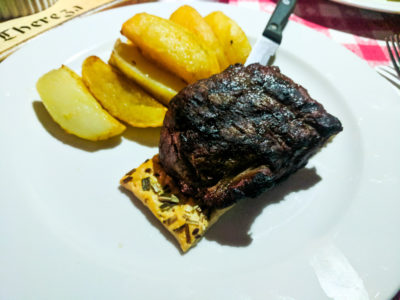 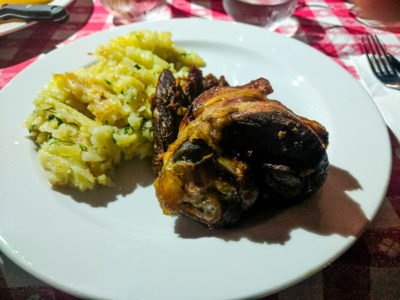 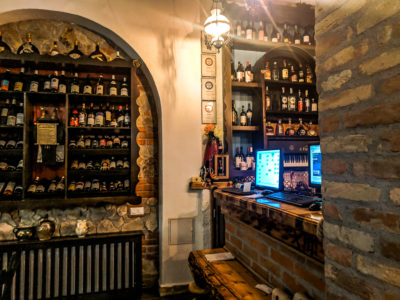 The village is a half hour drive from Sibiu. All the houses are colourful, there are about three grocery stores and no restaurants. The experience in the village is very authentic and there is a feeling of traveling back in time. While there are cars, there are also many horse-pulled carts. 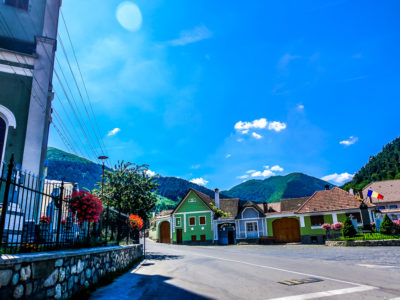 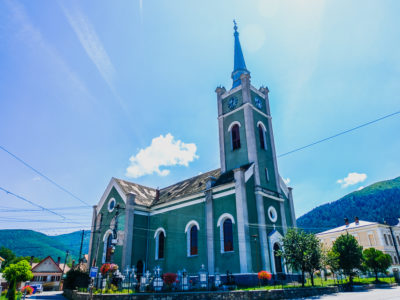 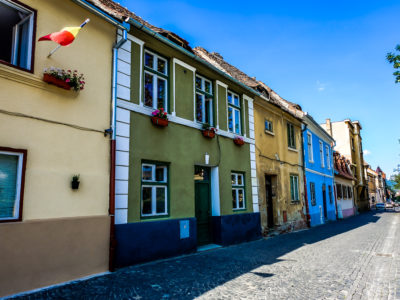 A 15-minute drive away from the village is an area with a river and a gorgeous, ginormous dam. The whole area is very pastoral, you’ll see many cows and horses along the way.
You can travel the area and drive along the road by the dam, to see its other side.

An hour away are the fun Ocna Sibiuliu salt lakes (Extended post about the salt lakes).