The decision to travel to Sibiu, Romania, was due to cheap flight tickets we found for August (2018)(Extended post regarding how to save money). After doing some research about the town and surrounding area, we decided to spend 3 nights in an Airbnb apartment (Link to 150-shekel discount on your first booking), then continue to 3 additional nights in a nearby village, in an apartment as well.

The apartment we stayed at in the city was very nice, its owner was charming, but the location was less good in our opinion. We had to walk about 20 minutes to the city center, which wasn’t very pleasant in the August heat. At least the taxis there are really cheap and there were a few times we took a taxi for 7 lei to the apartment or the city center.
We hadn’t considered renting a car at first, since the prices were quite high, but we ended up renting one since the area has many things to do and beautiful places to visit. We rented the vehicle though RentalCars website, from Autonom company.

Sibiu is one of the most important cities in Transylvania, Romania. Sibiu was founded in the middle ages, and later surrounded by a strong wall. It’s known for the sausage it used to produce. Each year an international Jaxx festival is held in it.

Where to purchase a local sim card in Sibiu?

At the main plaza (Map) you’ll find offices for Orange and Vodfone, both offering sim cards for around 6 euros, with 5 gigabytes each, which is more than enough.

Arrival from the airport to the city center

The owner of the apartment we stayed at was really lovely and came to pick us up from the airport, but you could get a taxi for very cheap, assuming there isn’t too much traffic. Without traffic, the price should amount to around 17 lei with a meter. When we landed at around 14:00 there was a lot of traffic, but even so, a taxi won’t run you more than 40 lei, so it’s definitely worthwhile. There are also busses, but we didn’t get to travel by bus. 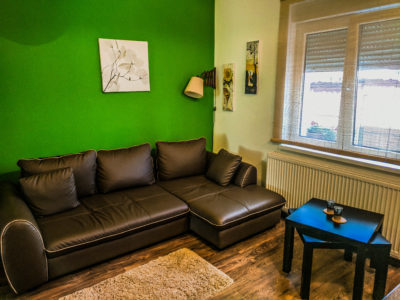 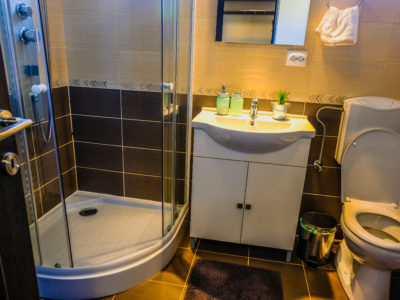 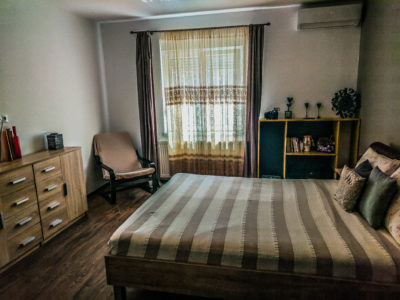 What to do in Sibiu?

Climbing 200 steps and looking over the city from above

One of the nice things to do in Sibiu is to climb to the head of the Sibiu tower. The tower is in the central cathedral, which is currently under renovation, so you can’t tour the cathedral itself – but you can climb the tower. Entrance is 5 lei a person.
There are 200 steps and the climb isn’t difficult. We’ve seen both children and adults go up.

When you reach the top, there are four turrets, each offering a view over a different part of town. There’s only one open window in each turret, so it’s better to visit during the week, as it gets quite crowded on the weekends, both on the steps and the turrets themselves. 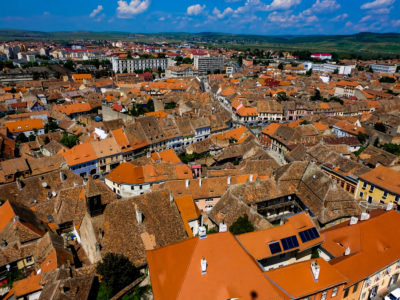 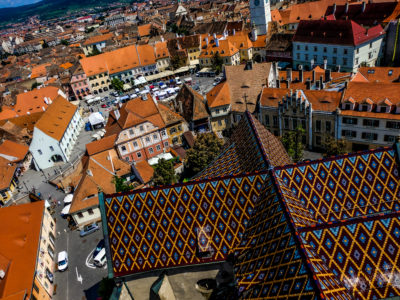 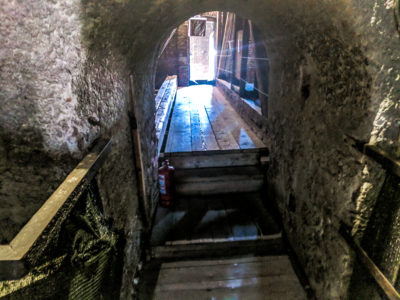 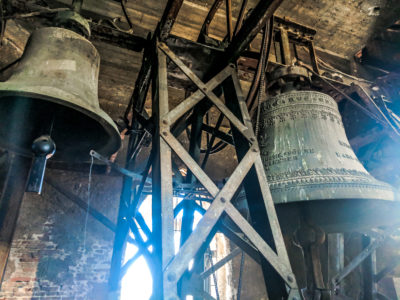 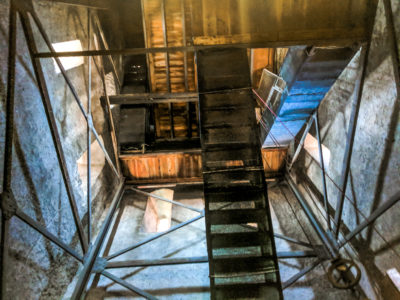 Since we stayed at Airbnb apartments throughout our trip and had a kitchen, one of our favourite things on the trip was buying local food and preparing meals at the apartment or going on picnics outside which was really fun.

One of my favourite places was the local produce market, open on Fridays between 10:00-13:00. It’s in the cathedral’s yard. There aren’t many stalls, but it has everything you need for a picnic or a nice meal. We bought vegetables, fruit, honey, cheeses, nuts – and there was a sausage stall which closed before we had the chance to buy anything and a freshly baked bread stall. Map.

The apartment we stayed at was at a less central location than could be desired, which was a disadvantage for us – but the upside to its location is that we were able to find two good local places, one was a Romanian restaurant called Prima. Roman claims it’s the best Romanian restaurant he ate at and their Ciorba soup was the best. The place is rather sought out by locals, so you may want to book a table in advance.
Address: Strada Petrila 20, Sibiu (Map).

Another nice place we discovered while walking from the apartment to the city center is a local bakery which produces a sort of bagel and stuffed pastries with sweet or savoury fillings. (Map) 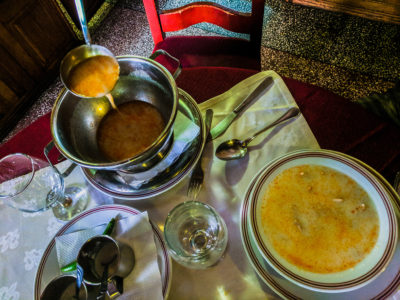 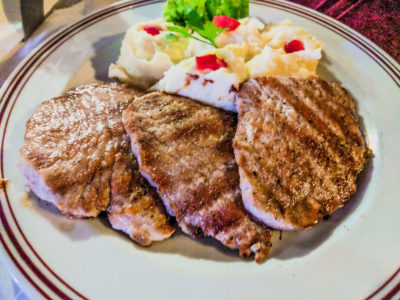 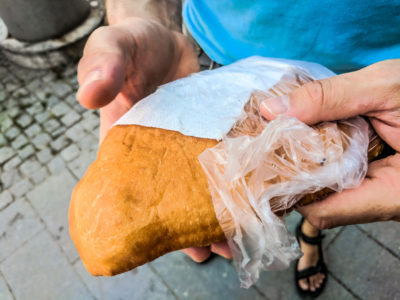 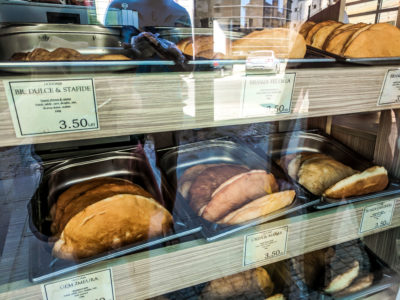 Visiting the bridge of lies

One of Sibiu’s icons is the Bridge of lies. Today, the Bridge of lies is considered a romantic location where lovers meet to swear eternal love to each other by hanging a lock on the bridge. One of the legends claims the bridge has an unexplained power, and that whenever a lie is uttered on it, it collapses.
The bridge itself is pretty and has many well-tended flower pots. Since it’s in a central location, chances are you’ll cross it even unintentionally (map). 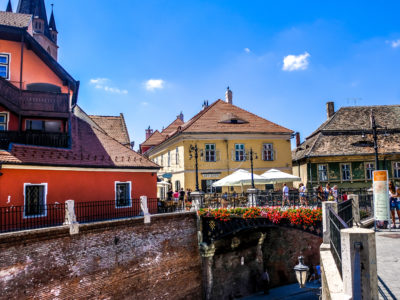 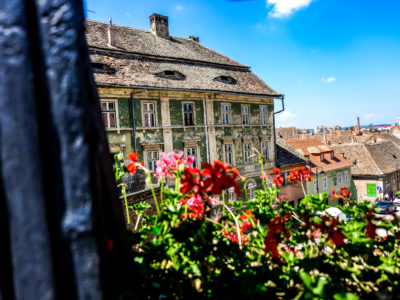 Shopping at souvenir and food stalls

By the bridge you’ll find nice stalls, operating from morning to night. You’ll find food stalls selling hotdogs, Kurtoskalacs and many souvenir stalls which are nice as well. We bought a set of handmade salt shakers, a handmade bell and a keyholder. 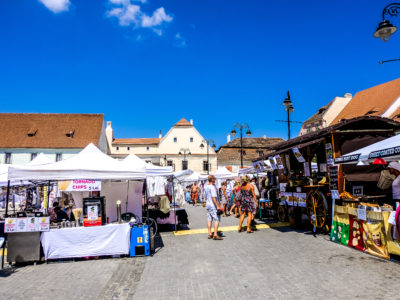 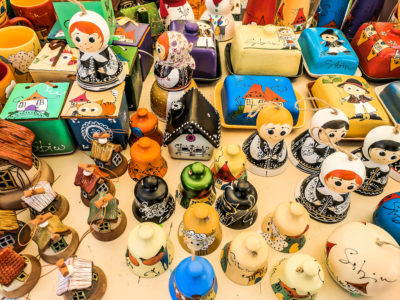 At Sibiu’s main plaza you’ll find restaurants and cafés, as well as street shows. While we were there, an orchestra was playing, and it was really beautiful. (Map) 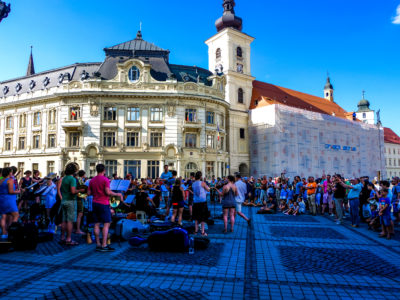 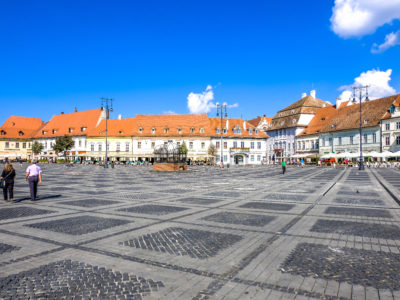 Walking around the old town

Another nice thing to do in town is simply walk around it aimlessly. Walking the alleys, passing the gates, going down stairs and walking by the wall. Just wondering on foot and enjoying the city. 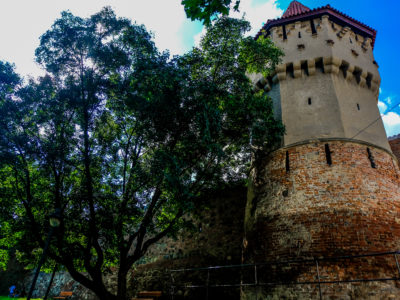 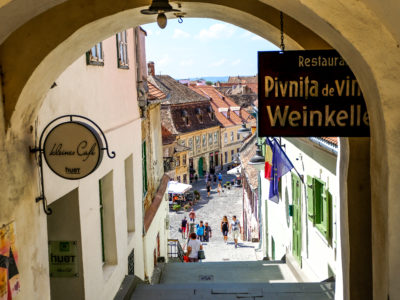 A café I liked a lot is Arhiva de Cafea si Ceai.
It’s an intimate and charming café, offering good coffee, cakes (We ordered an almond cake which was really good), different juices (We took pear juice in a bottle), and also has a food and wine menu. (Map) 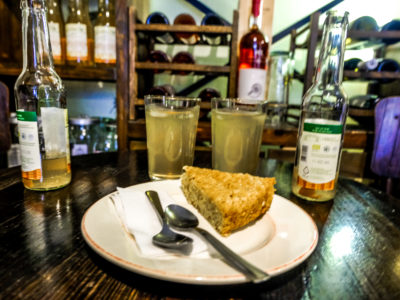 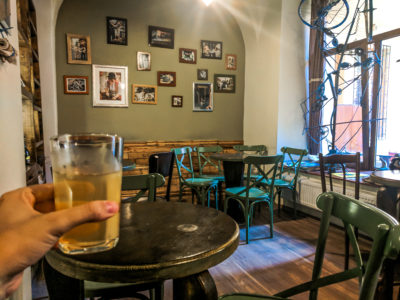 Another nice café is Wien Café, which is by the cathedral. What I liked about it is the nice balcony where you can sit and enjoy the pleasant breeze and the view. We ordered an Americano. Tip: this café has two balconies, one is central and usually full and the other can be reached through a side entrance (By the bathrooms), that balcony is less crowded and I personally think it’s nicer to sit there. (Map) 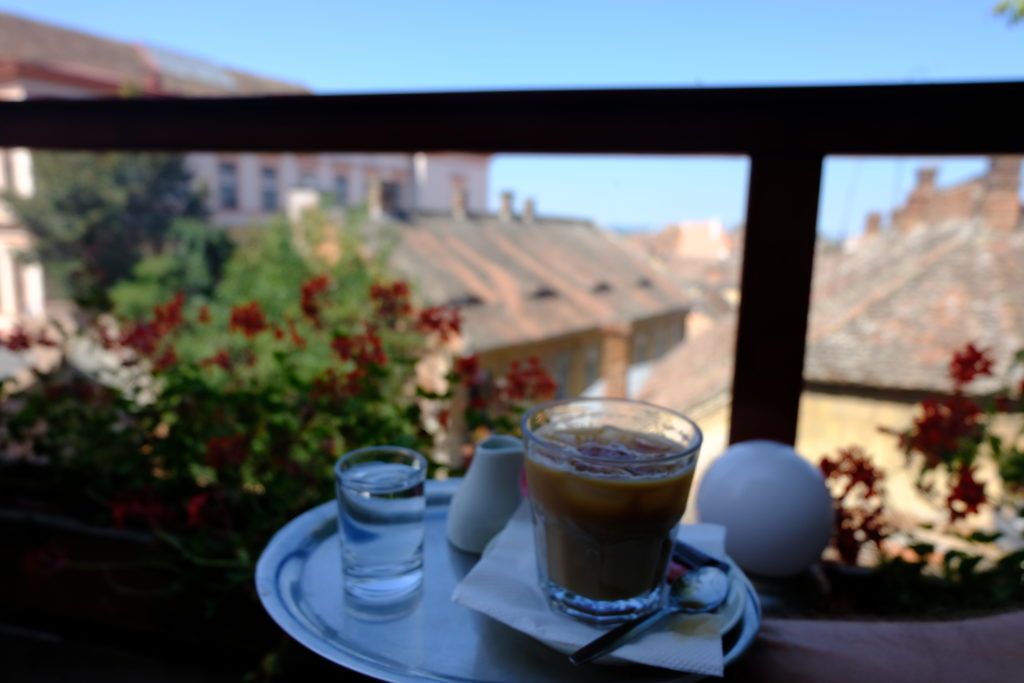 Another place I liked is a vegan café-restaurant, She’s Green. A café with a sweet design and a special, tasty vegan menu. We ordered an almond based soup there which was really good. We told them we’ll share it and they split the soup between two plates (Very nice of them), for mains I ordered a pasta salad with avocado and Roman had a carrot pasta salad. The soup and mains were delicious and had a very unique flavour combination. (Map) 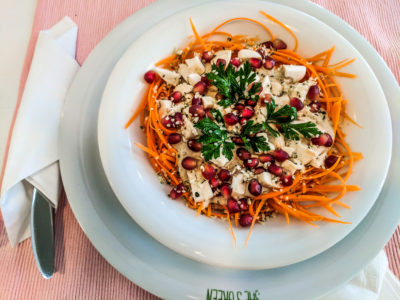 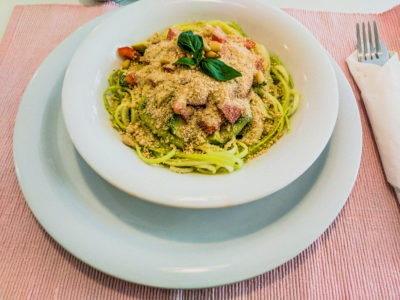 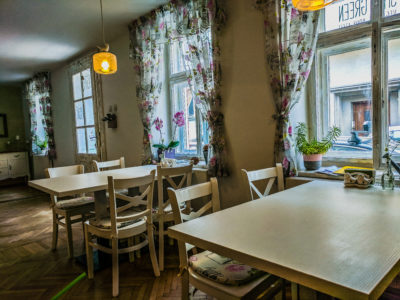 Dining at a romantic restaurant

On our last night in Sibiu we went to Old Lisbon, an excellent Portuguese restaurant. If you like fish and sea food, you’ll enjoy this restaurant a lot. The service there was the best we’ve seen on our trip, and the food and drinks were delicious. Roman ordered a Margarita and I had a glass of Portuguese white wine. For starters we had salmon tartar and mango, which was perfect (I wanted to order a second serving) and a dish of Bass tartar, which we found to be less good, however the salmon tartar more than made up for it.

For mains, we had trouble deciding what to order since every dish sounded great, but ended up going for a sea food pasta with a white wine and garlic sauce and it was a winning dish. The sauce was subtle, and you could feel the flavour of the pasta and the seafood, we enjoyed this dish immensely. (Map) 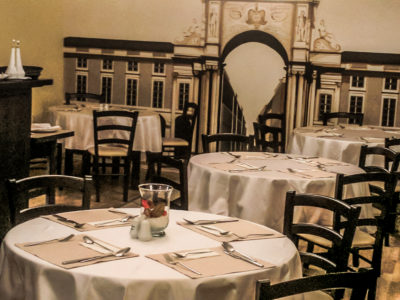 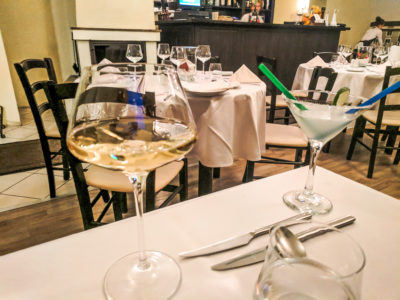 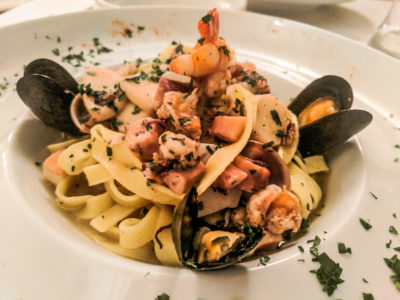