Rome is so gorgeous. Everywhere you look, you will see an amazing Piazza or a stunning architecture.  Rome is full of history, good restaurants, cool bars, Delicious gelato, cute coffee shops and more.

In Rome we stayed at an Airbnb apartment near to Campo De Fiori market. You can Click Here and get $40 off your first order on Airbnb.

We came across this restaurant while walking on a tour around the city. During the tour we passed by Pasta Imperiale and our guide recommended it saying it was delicious – or, delizioso.

He mentioned that it was a great place with some great prices. After we finished the tour, we had to go back for dinner. Once we got there, we found out we had a few options: we could either customize our pasta – pick our pasta type and sauce, or choose straight from the menu. My husband Roman ordered spaghetti with tomato sauce and meatballs, and I took a heavenly ravioli filled with ricotta cheese and asparagus in sage & butter sauce.

Both pasta dishes were incredible. They were light, and I especially loved that the pasta is made in-house. The sage & butter sauce was cooked to perfection. It was not too greasy and the ravioli was so flavorful. Roman’s spaghetti was successful and the meat was delicious.

For dessert Roman ordered a tiramisu, but I didn’t eat any just because I don’t like it in general. 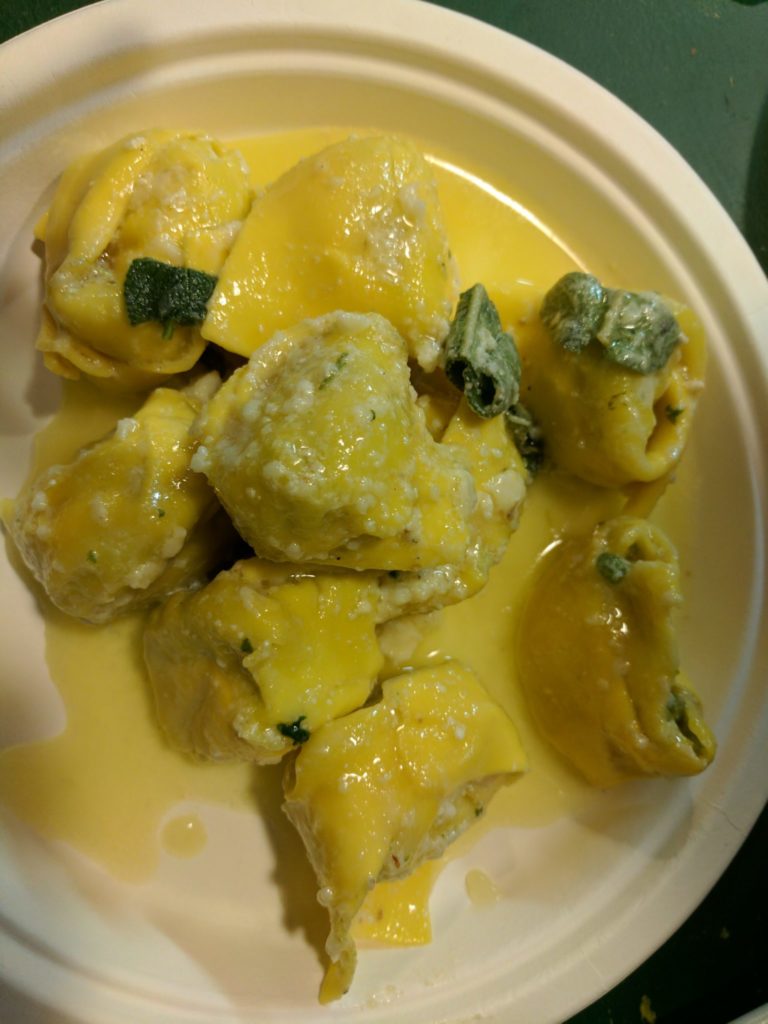 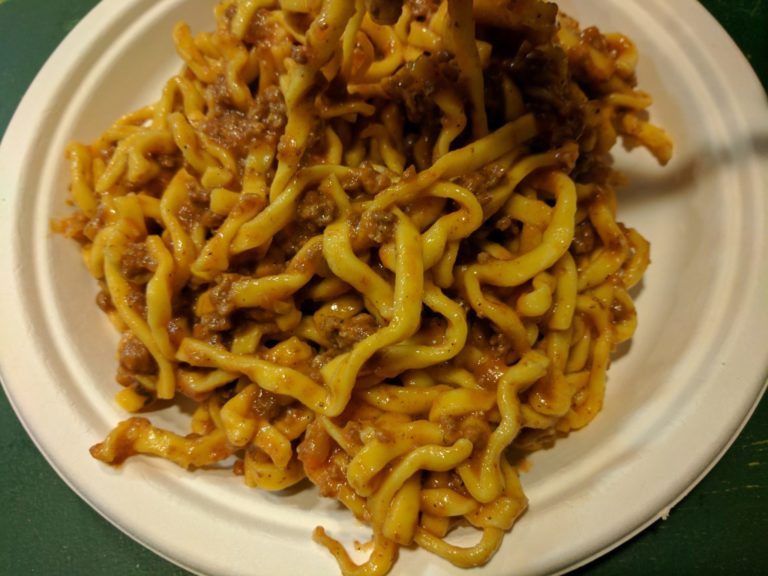 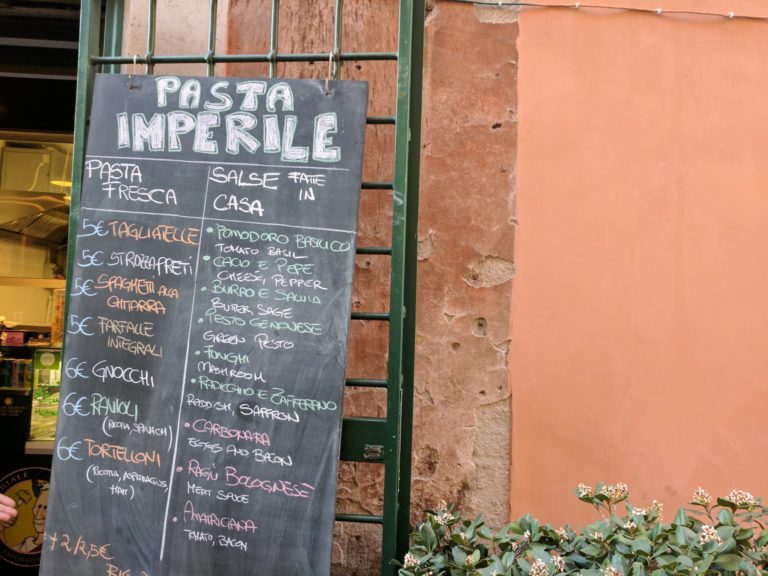 We stayed at an Airbnb and the owner recommended this great restaurant that was right down the street from us. So of course we had to go and check out a recommendation from a local.

We tried the margarita pizza and zucchini + cheese pizza. YUM. They were both amazing. It was made the right way with a thin crust, just like the Italians know how to do it. The zucchini pizza was a great surprize, it tasted like a combination of a quiche with pizza. The margarita tasted really really fresh. (Italians are known for making their own cheese).

It was a good price and they charge by weight. It’s a super popular restaurant so there was a bit of a line.
Roman had to go back, so during those times he just ordered a slice to go since it was so close to our apartment. 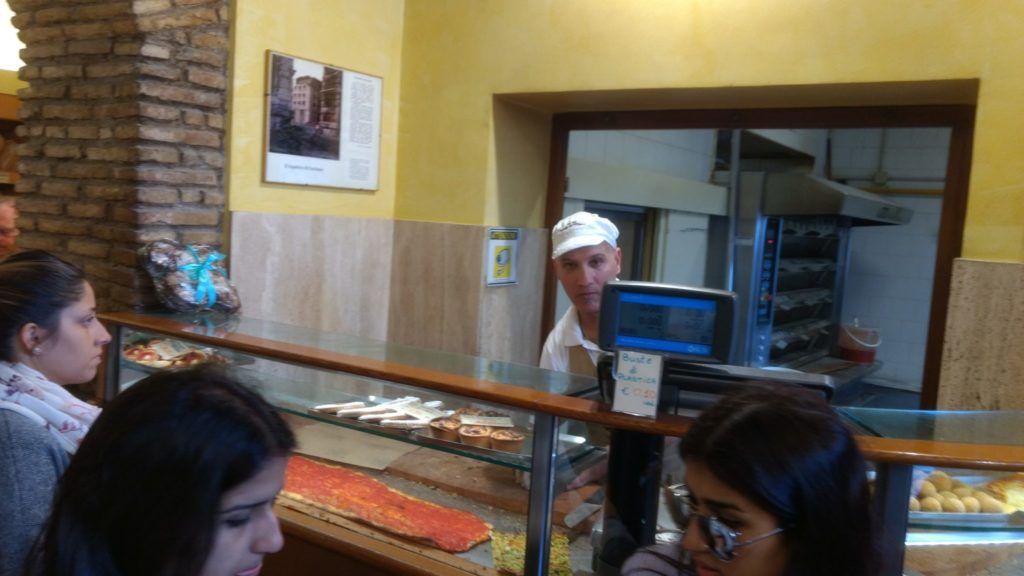 Roman surprised me by taking me to this restaurant on my birthday. It was so amazing celebrating in Rome. He booked it in a advance because it’s super high demand.
We fell in love with the restaurant right away. The design was really nice and luxurious. Everyone were dressed so fancy and it felt like a 5-star restaurant.

We were a few minutes early, so our table was not yet ready. While we were waiting they treated us with some bubbly. A few minutes later, we got our table and sat down.
Roman specifically asked for a table near the window, so we got the city view and it was so lovely.

The dishes on the menu were so unique, that we absolutely had no idea what to pick. There was also an option to pay 50 euros for the chef’s specialty which includes 3 appetizers, a main course, and dessert. It sounded like a great option, but we ended up ordering the most delicious-sounding courses from the menu.

We ordered some octopus, 2 pasta meals and the fish of the day. They were all delightful and we loved the service and the vibes.

I must say that there were other restaurants with more surprising dishes that we found on our trip (at Lucca and Lake Como). However, this was an excellent restaurant if you want to experience a lovely romantic evening with some great food. 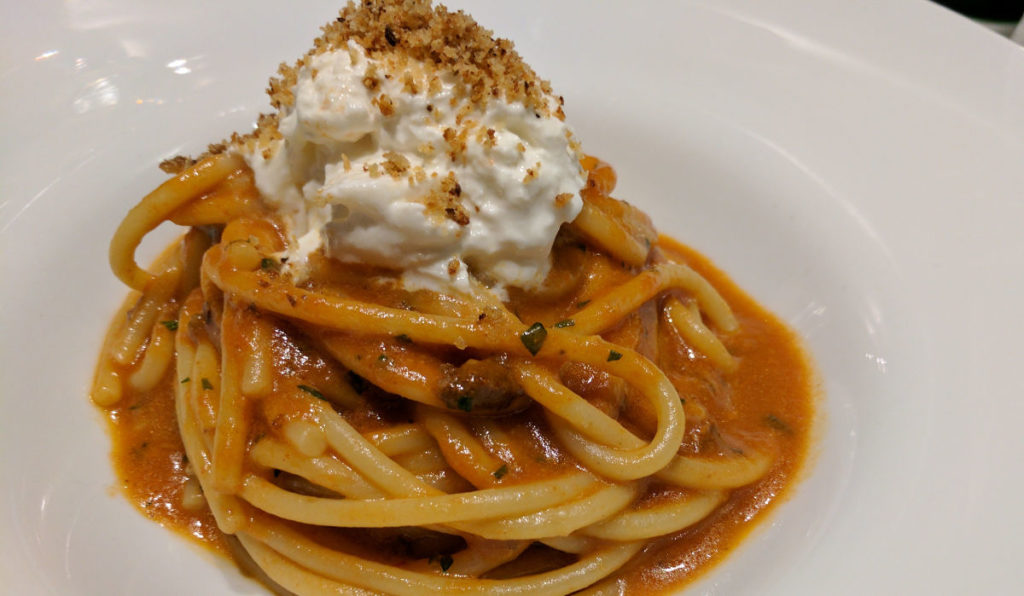 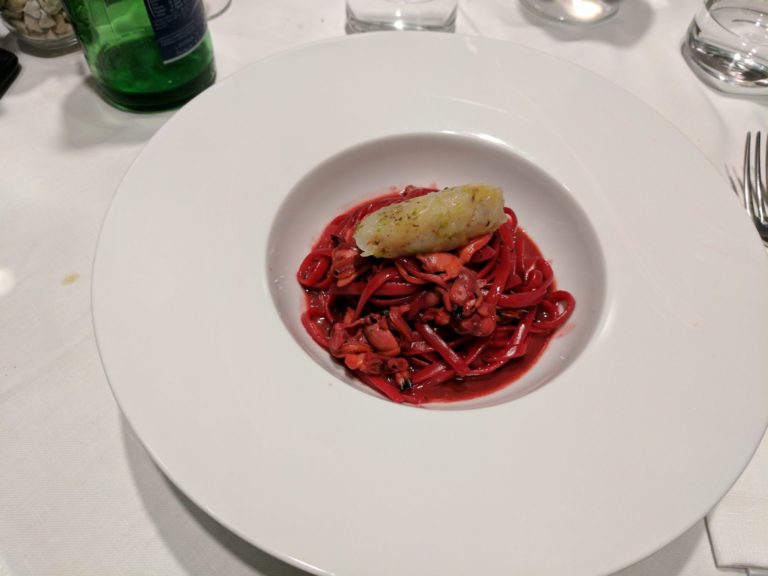 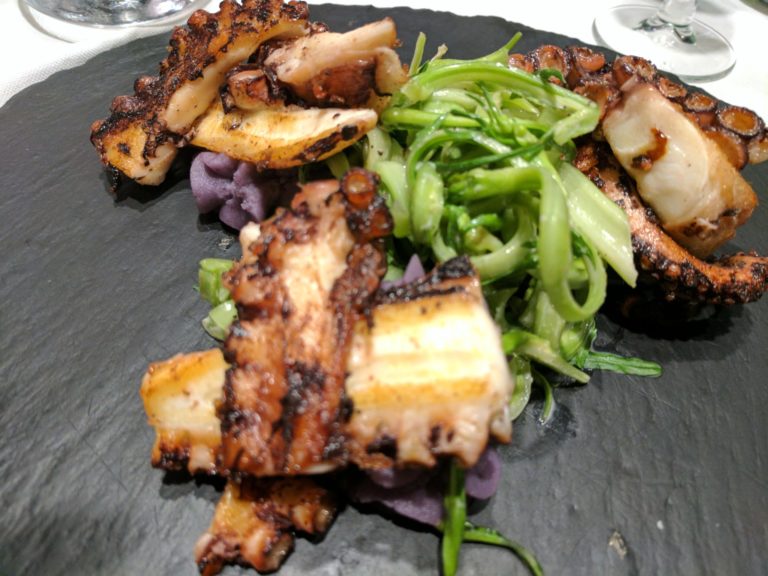 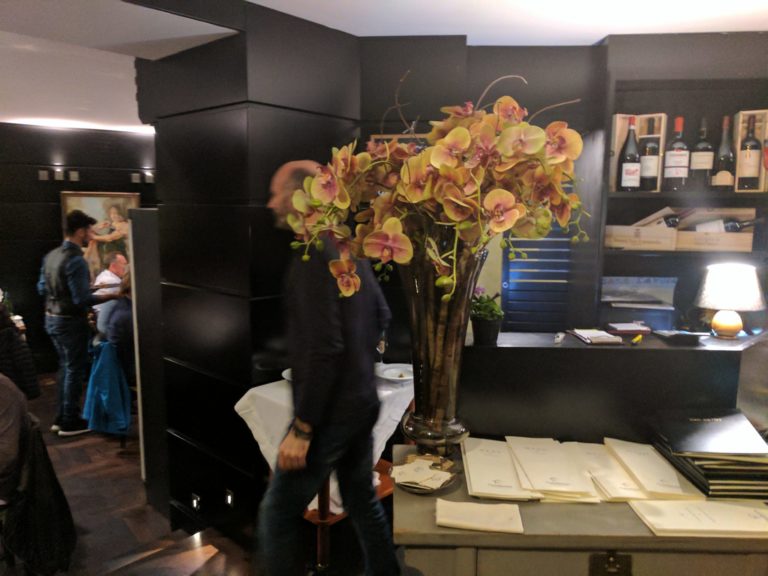 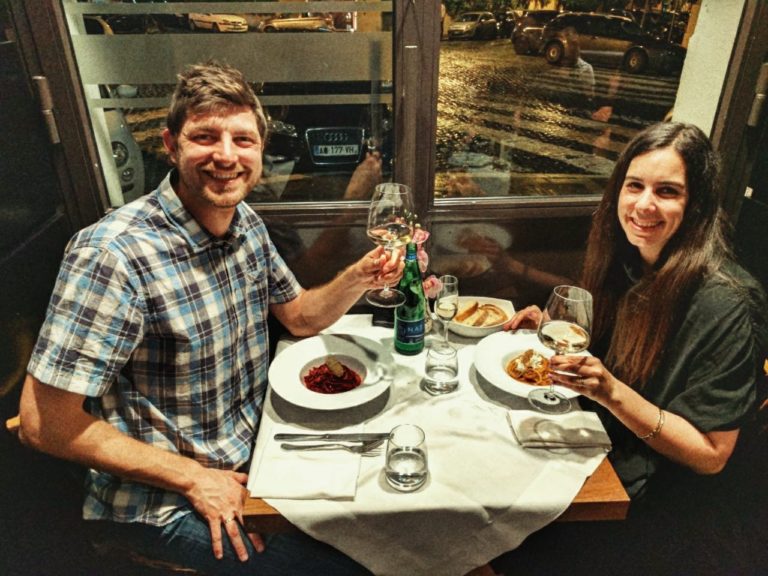 We went to Trattoria Da Enzo after our visit to the orange garden. It was about a 15 -minute walk. We went to the area because we found a local’s recommendation to a restaurant. When we got to the place she recommended, it was pretty much empty, but the place next door seemed filled with life and the scents coming from the kitchen were incredible.

As you can figure we decided to go to the other place, and I was so happy with our decision. We ordered some appetizers, a ricotta cheese with jam and local olive oil with bread. They were both so good, and the ricotta was the creamiest & best I’ve ever had.

As main courses we ordered the veal and carbonara. The veal was really good; the meat was cooked to perfection and the flavours were subtle. However, the carbonara was not the greatest.

I peeked to other people’s tables and the pastas they ordered looked and smelled delicious.
I recommend going to this restaurant because you will feel like a true local, but just don’t get the carbonara. The ricotta is a must. 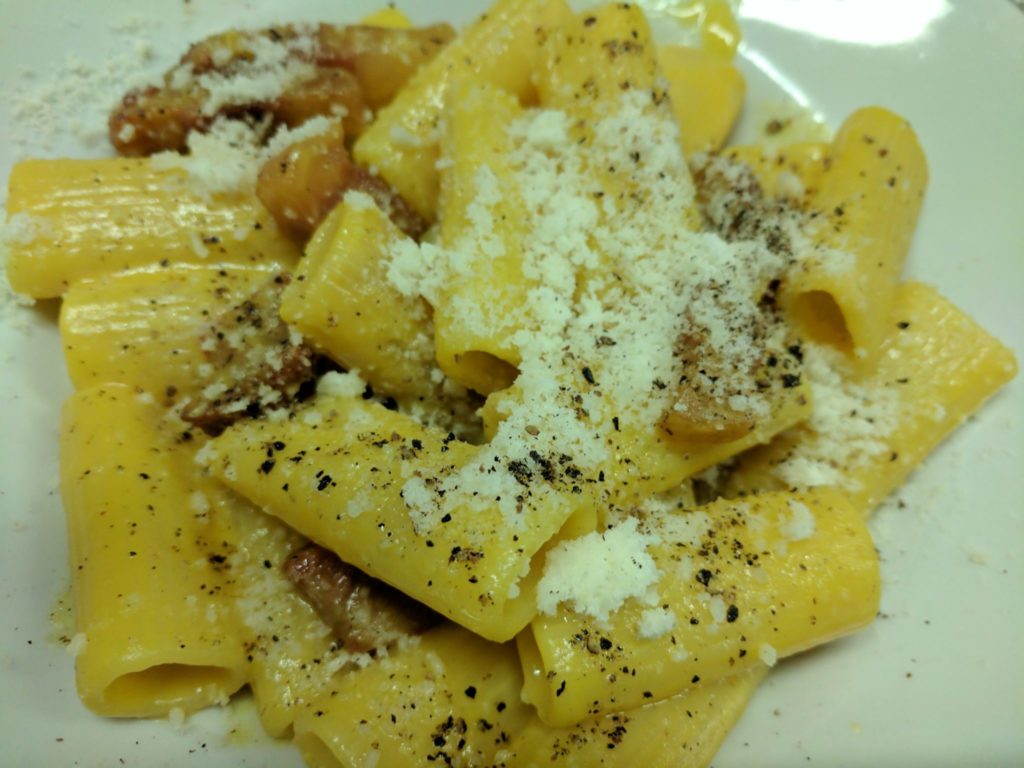 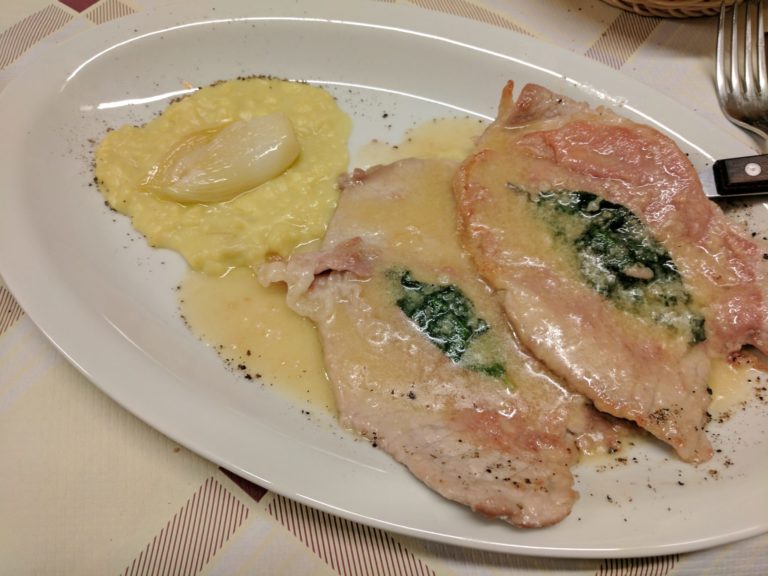 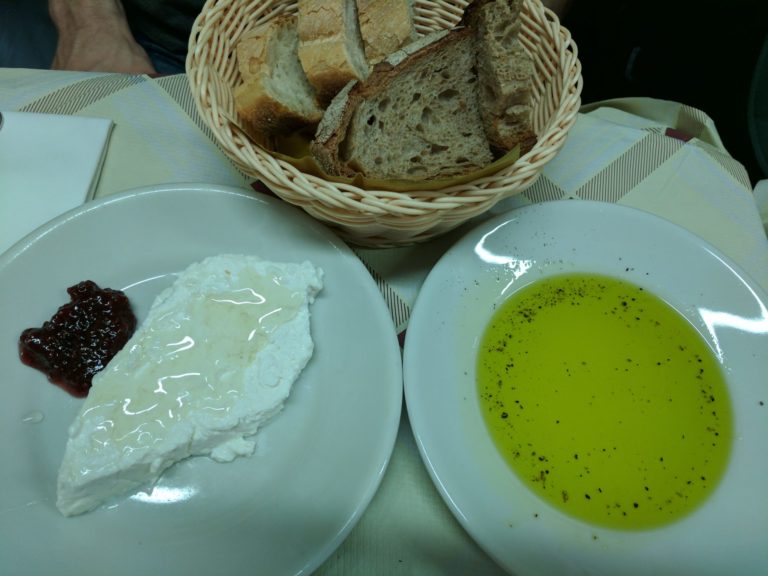 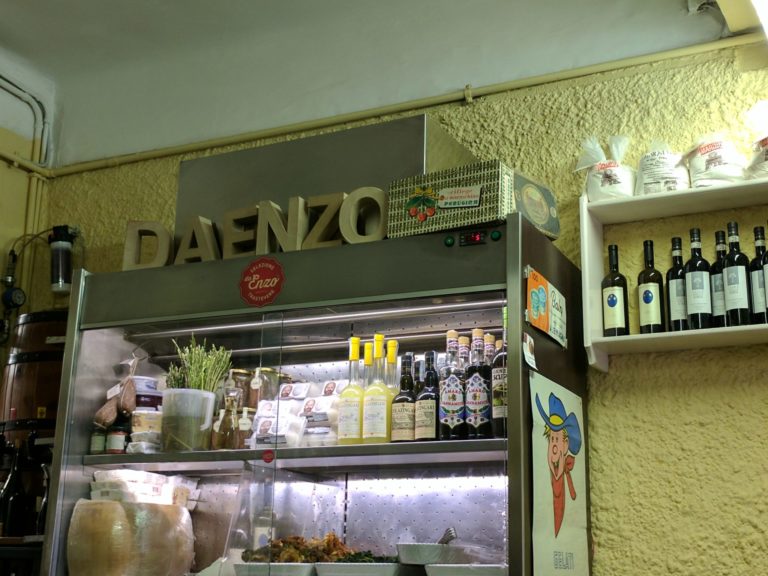 Right after we landed, we went straight to Mercato Hostaria. It’s located right next to the campo de fiori market, and it was a totally random pick. We had to choose from all kinds of delicious looking restaurants.
I just ordered some salad because I wasn’t feeling too hungry, and Roman ordered some Carbonara (he’s always hungry.)

The salad was eh, or in other words: plain, just a bunch of veggies cut with loads of lettuce and no dressing. On the other hand of the table, Roman ate his dish in less than a minute. I only got a single bite before he devoured it, and I would have to agree with Roman, it was really delicious and unique.

It was the best carbonara of our entire trip. That is why, we gave this restaurant the name of the number one carbonara restaurant. 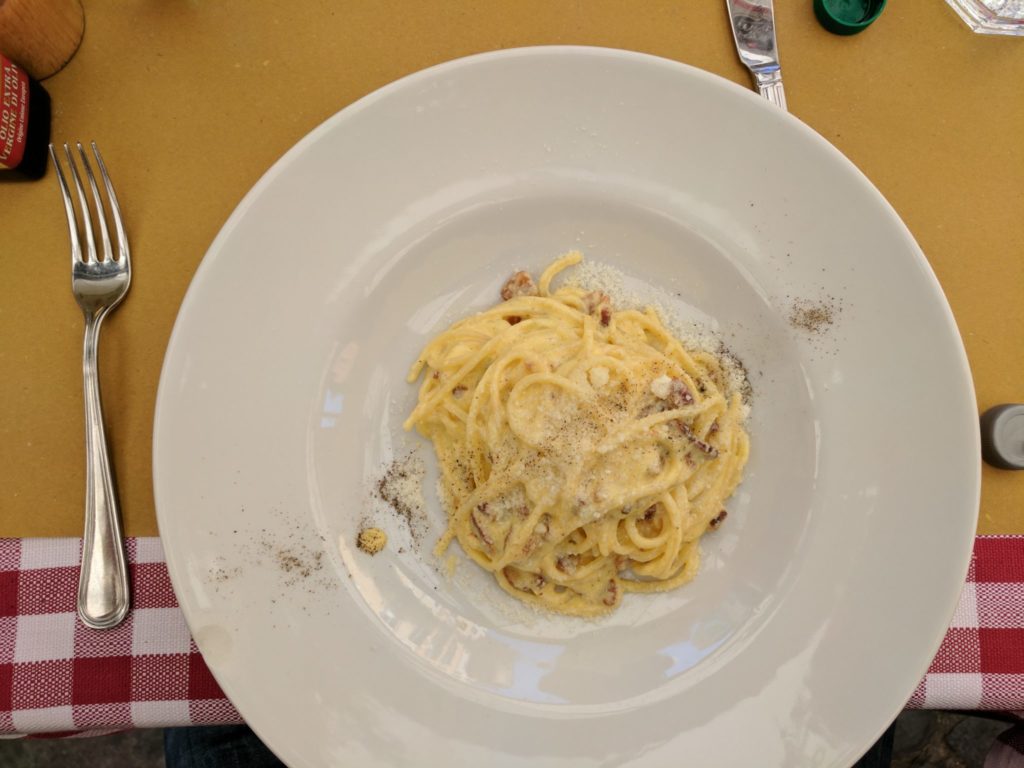 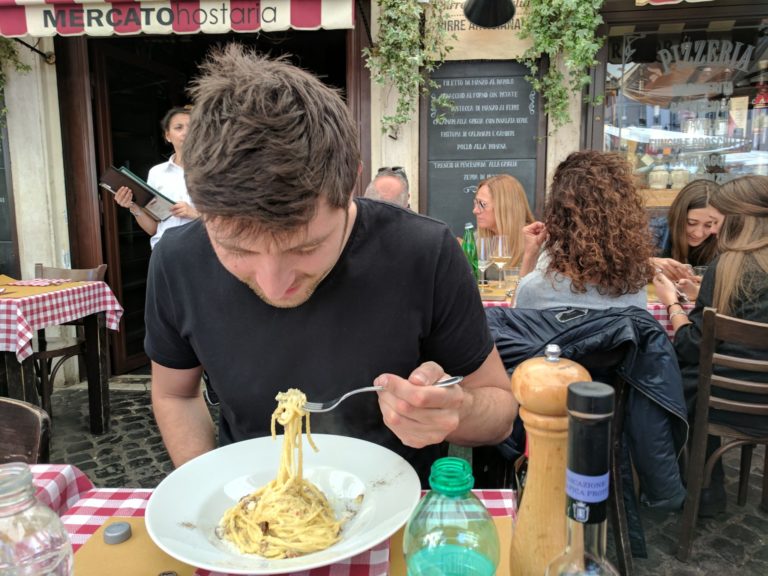 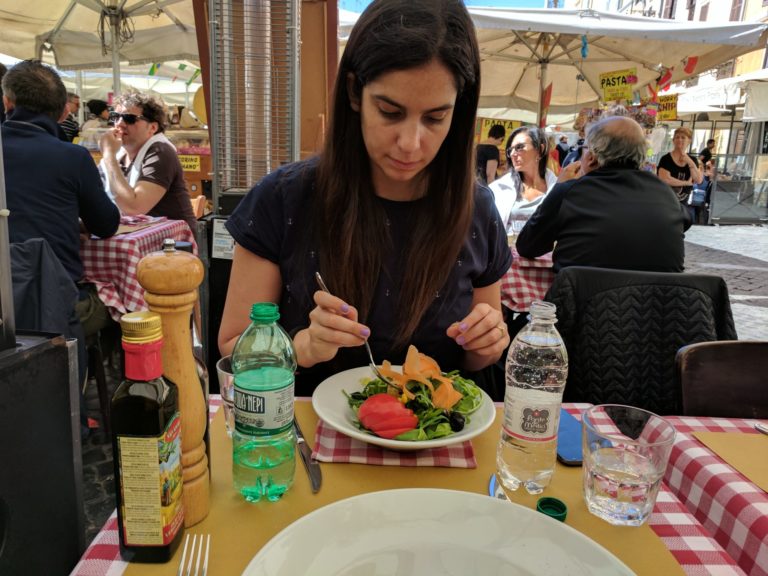 We actually came across this cute vegan place while we were on the search for a small birthday cake. They had a few cakes displayed near the cashier. I got my eyes hooked on the vegan cheesecake. It looked really good and the waiter recommended it. It was covered with fruit jello and it had chocolate at the bottom. It tasted as good as it looked.

Since I was not hungry, I didn’t get a chance to eat anything other than cake but the menu seemed good and the prices were low.
They had vegan burgers, pastas and salads. So if you’re looking for a good vegan place then this is a great spot.

Address:
Piazza del Paradiso, 18, 00186 Roma, Italy – They have more locations all across Italy. 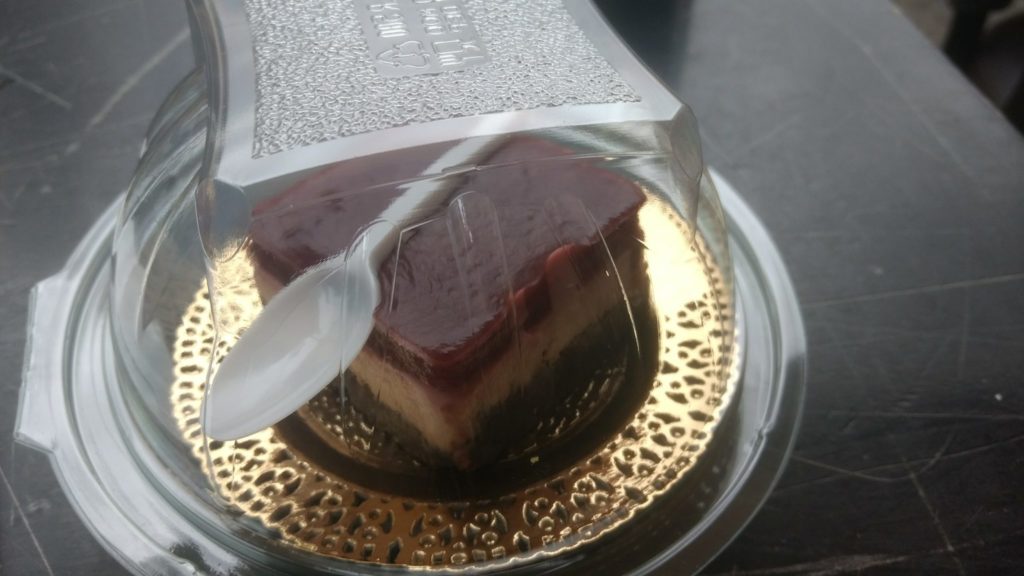 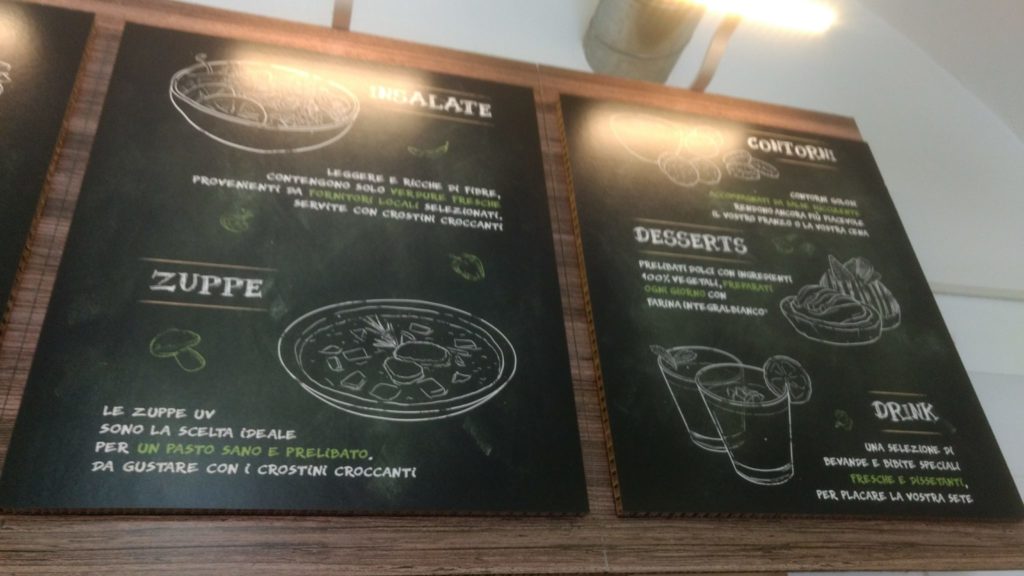