Lucca is a stunning city that lies in the Middle-Northern part of Italy. In the medieval times it was the capital of Tuscany.

Among other magnificent things, the city is known for the walls that it’s surrounded by, which were built in the Renaissance between 1504-1645. Despite the centuries that passed, the walls remained standing and since the city has expanded beyond them.

We stayed in the ancient cities, between the walls, and I must admit that it stole my heart from the first second I laid my eyes on it. There are many old alleys with shops, restaurants, cafes, and a unique vibe that I can’t really explain. There is so much to do, so many people, and during the summer the locals come here as well.

We decided to go for an Airbnb, which was charming. We would actually live there if we could. The design was beautiful, and perfect for a couple. It had the greatest kitchen of all the Airbnbs we ever stayed at. If you still don’t have an account with Airbnb, click HERE and get $40 off your first order, on me 🙂 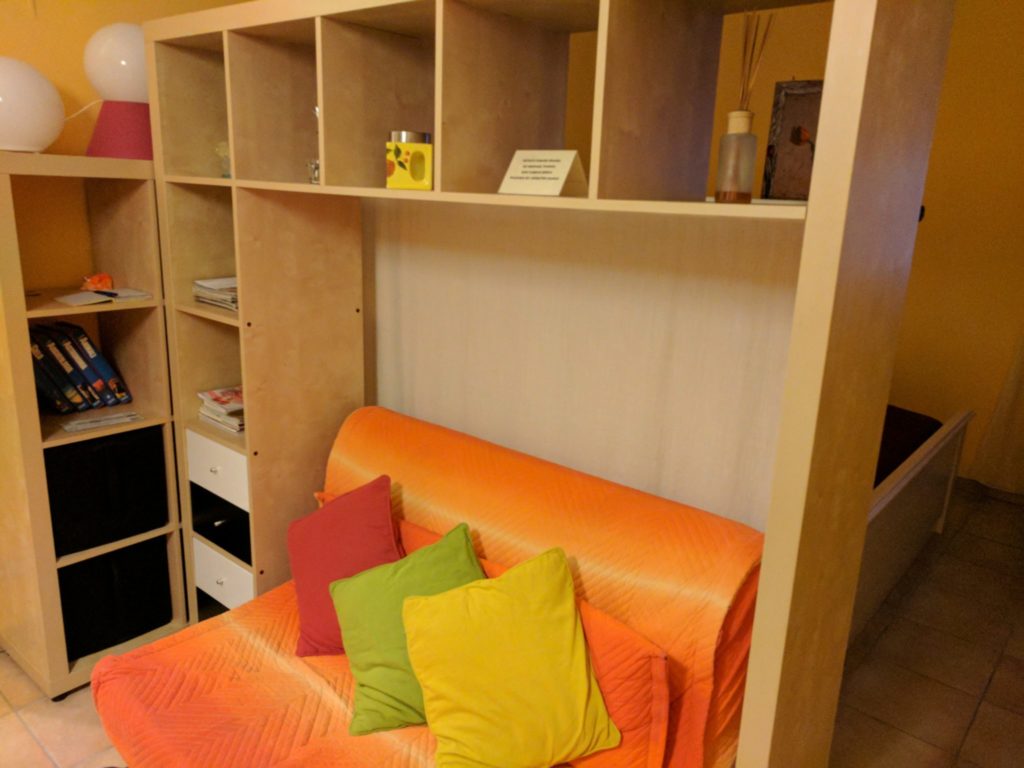 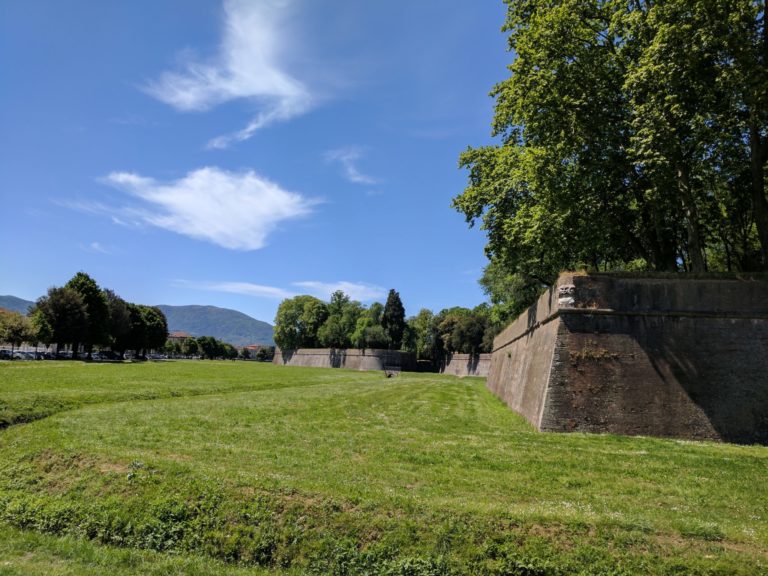 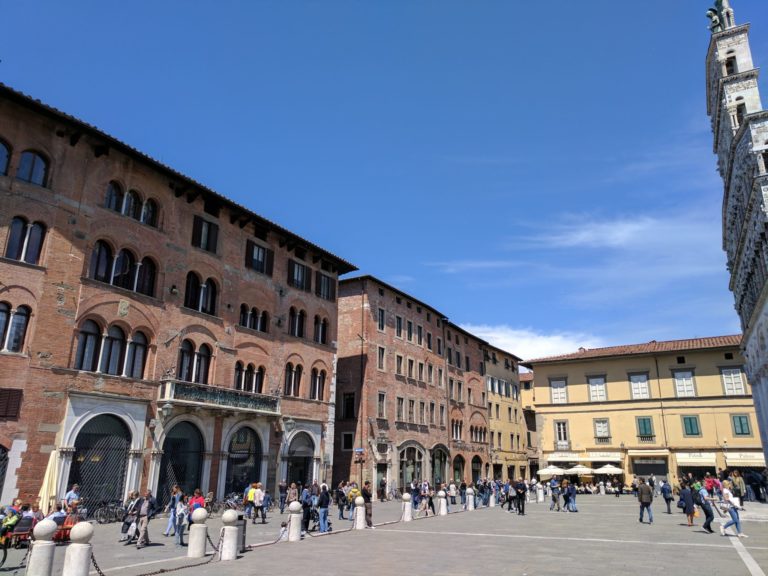 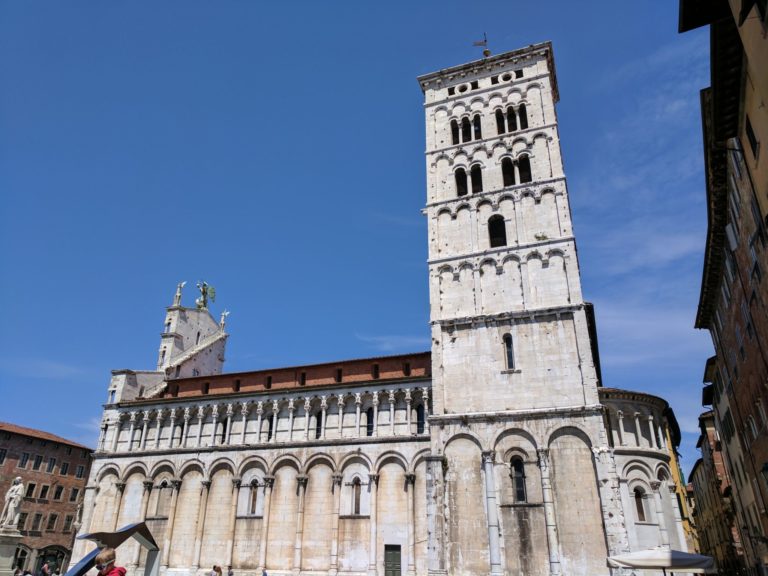 One of the best things to do in Lucca is to rent a bike and go riding above the walls. The walls are so wide, that there is a biking trail, and even parks for children and lawns. The ride is really convenient and nice, it’s all plain so you’ll be good even if you’re not in shape. You can also ride in the city itself between the magical allies.

It was an awesome experience, and you should definitely do it. We rented our bikes from a store called Tuscany Ride-a-Bike. The cost per hour is 5 euros and 7 for 2 hours, and there is also an all-day option and even multiple days. 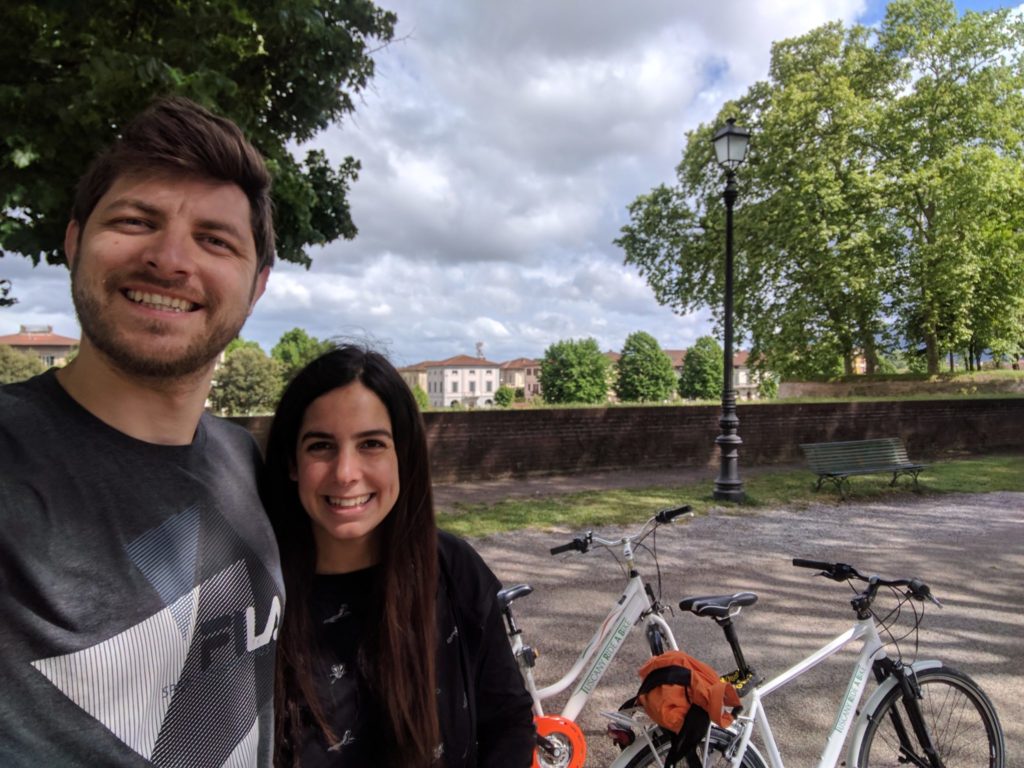 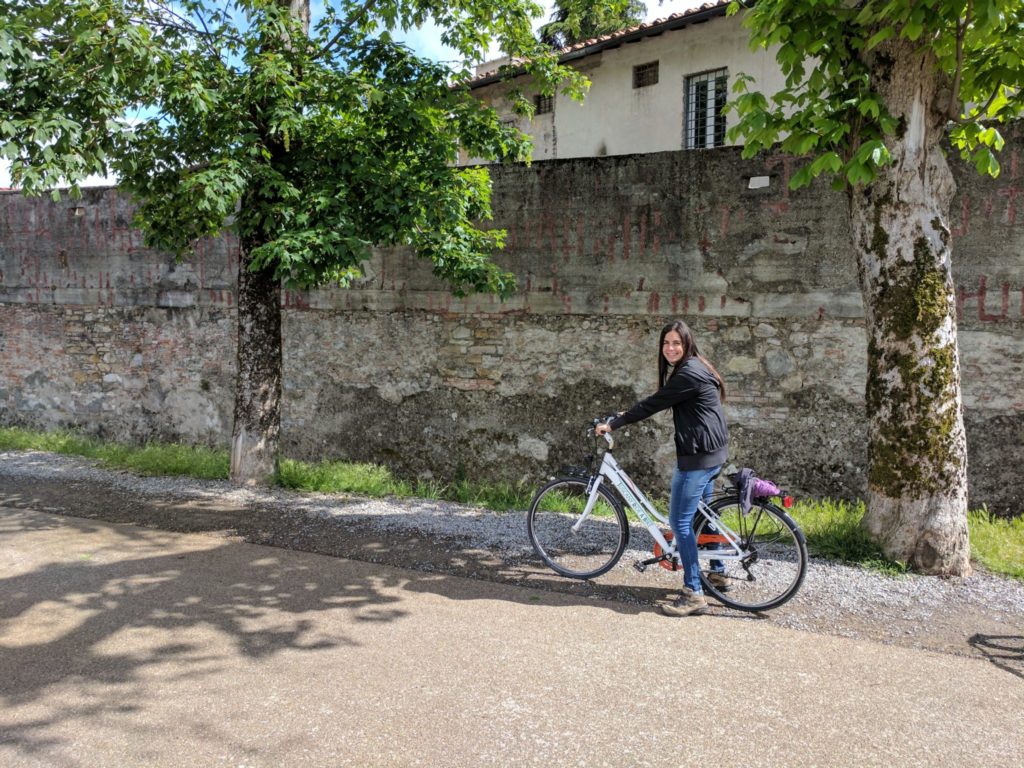 Viewpoint from the clock tower

I happen to love towers that have a good view to a city, and I must say that the clock tower did not disappoint me even the slightest. There is a climb, but it’s not that bad. It’s as if climbing 7-8 flights of a building, and it’s totally doable without a lot of effort.

The view is incredible and there’s a great breeze. The admittance is 4 euros, and during November-February the entrance is prohibited. Hours: March and October 9:30am-5:30pm. April-May 9:30am-6:30pm. June-September 9:30am-7:30pm. 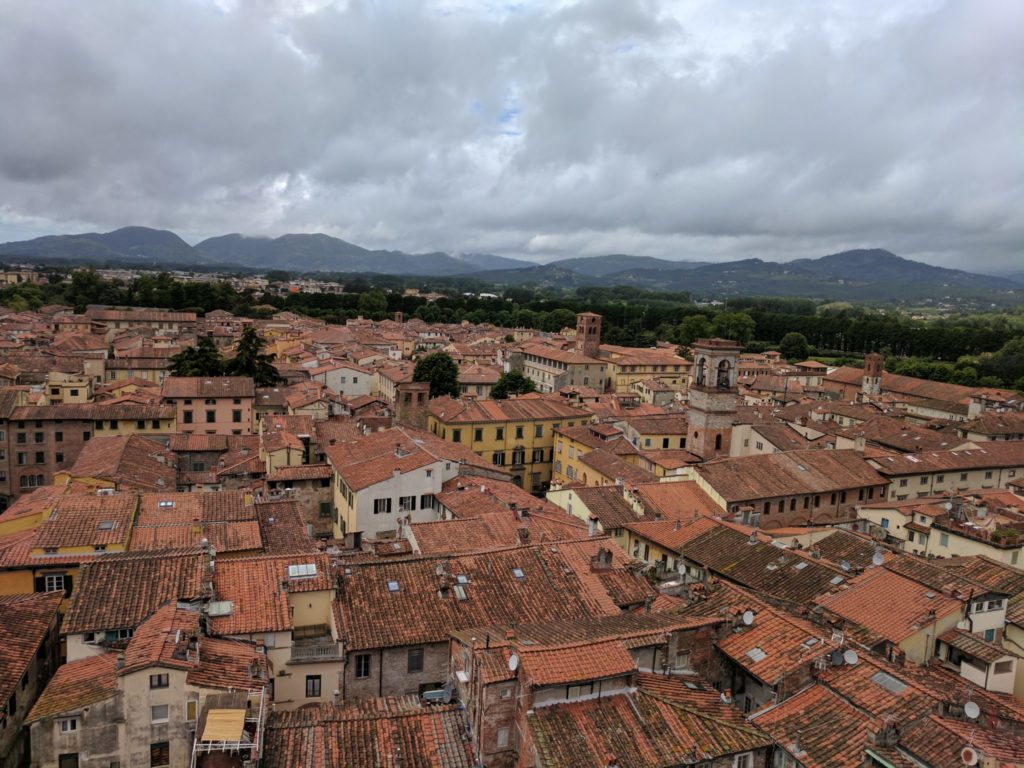 This makes the list of our top 5 on our Italy trip. One day we took a trip outside of Lucca, and as soon as we got back we were just a little hungry, and we started looking for a place to eat. We came across Ristorante Cantine Bernardini Lucca, and we read some good reviews. We weren’t too hungry so we decided to eat there when we would enjoy the meal to the fullest. We booked a table for that same night and we just had a small snack.

By sunset we started getting ready; we dressed up and we walked over to the restaurant. It was already almost full, and the design was very romantic. The waiters were really nice. We ordered a sampler of 5 seafoods and we also got some bread.

I’m not a fan of bread at restaurants because I just find it too filling. However, I must say, that this was the best bread that I’ve ever had at a restaurant. It tasted like cake. I also love the seafood platter, it was delicious. For the main course we ordered ravioli filled with fish, and a meat course with beans and polenta, as well as a baked veggies course.

The ravioli was just wow. I’m serious. It was so delicate and flavorful. It was just sooo good. The meat was delicious and did not disappoint. I was already full, but I also tried the veggies, that were well-seasoned. Roman never gives up dessert, so he ordered a tiramisu and I got the panna cotta with fruit syrup. We loved the desserts. The panna cotta was light and tasty, and Roman claimed that it was the best tiramisu he has ever had. Of course, I forgot to mention, we ordered some wine and it was fantastic.
I highly recommend this place. It was one of the best restaurants of our trip by far. 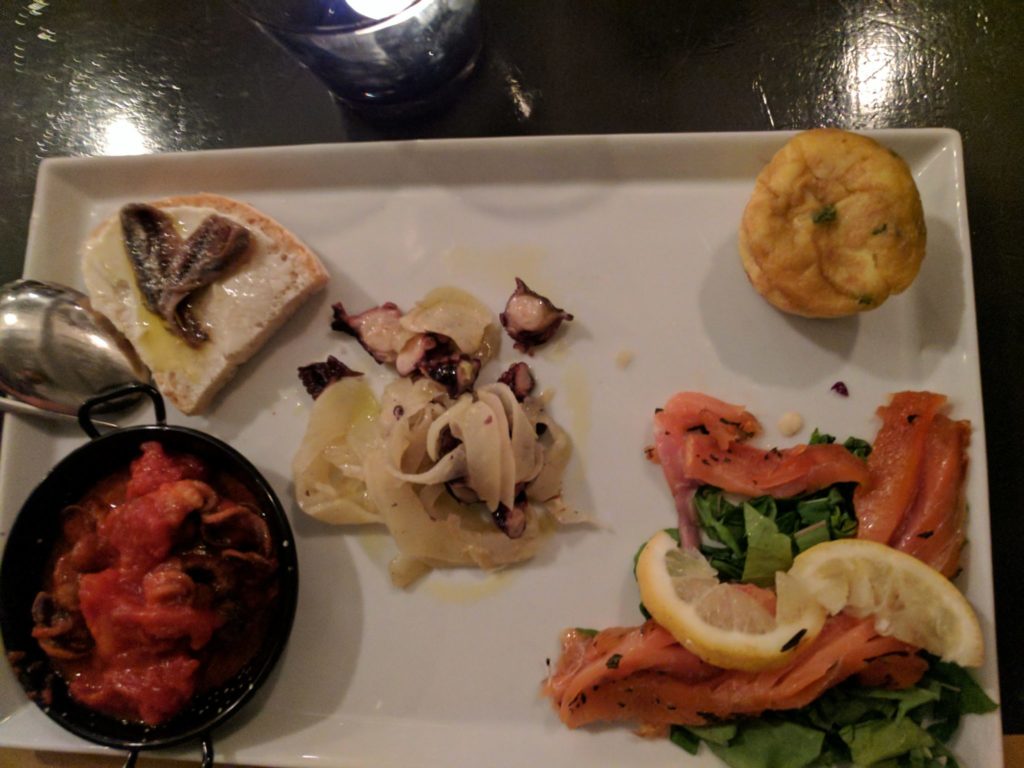 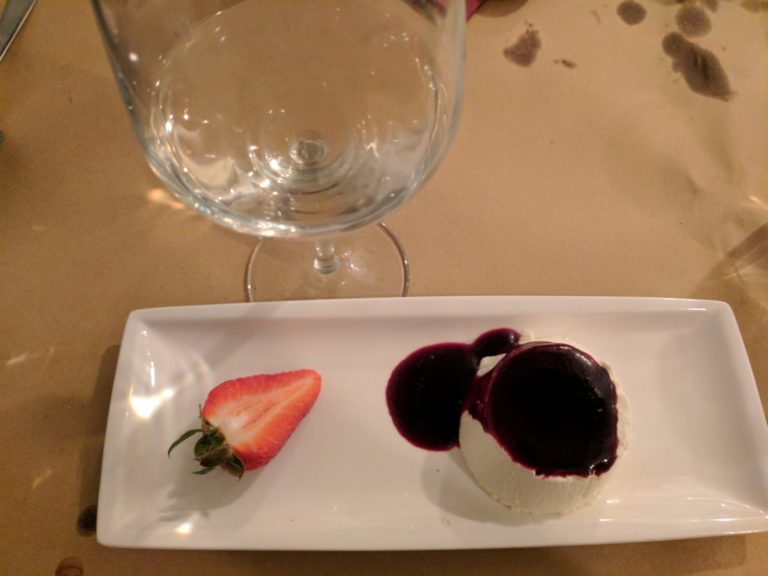 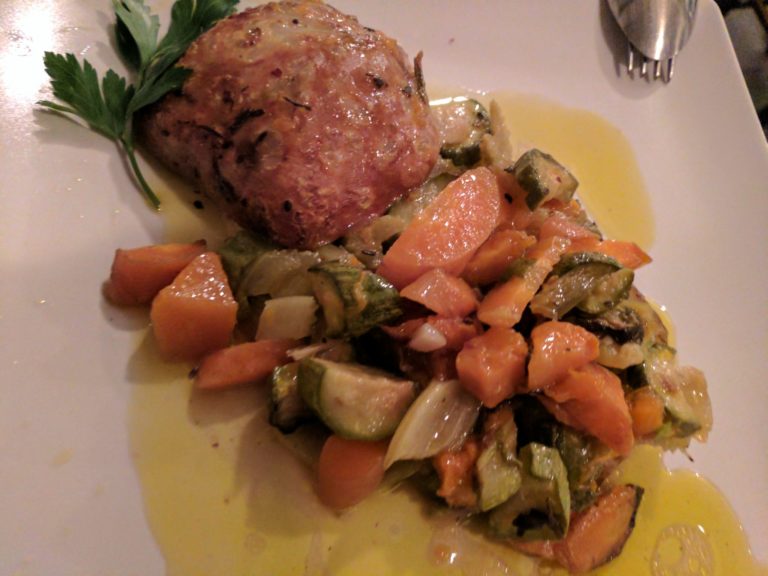 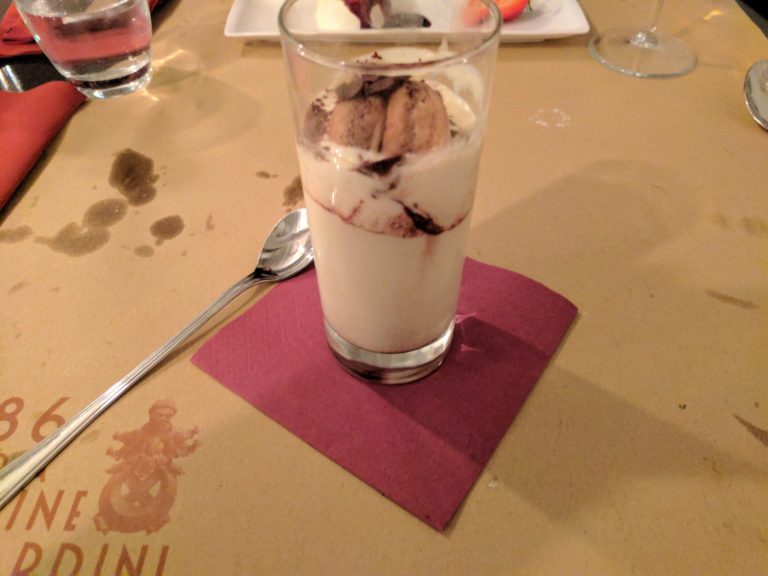 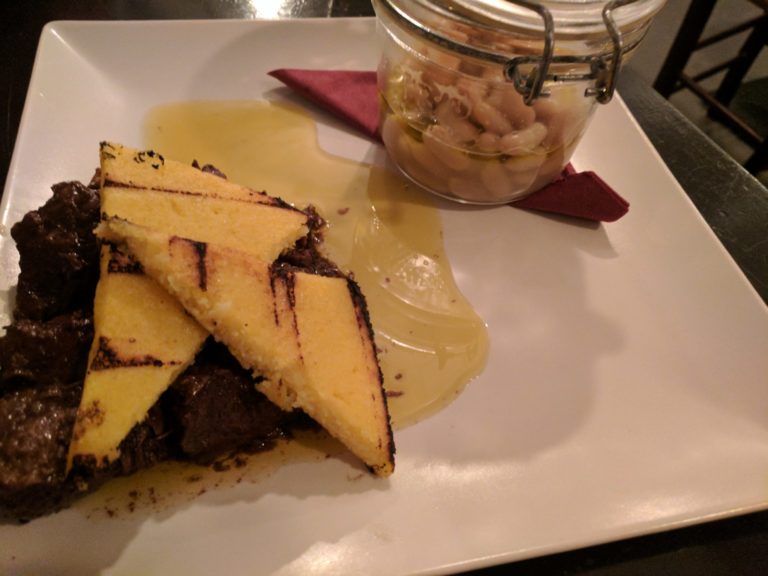 This is a great place if you’re looking for big meals and delicious food. They have good reviews only, and you can be full even if you just order a main course.
The prices are low and the food is great. For a starter, we ordered a fresh calamari salad, which was really good. For the main courses, Roman ordered 2 (he only realized that it was too much when he got them…), he got the spaghetti vengola and a polenta with mushrooms.

I got the ricotta ravioli with vongole, which is a nut sauce. It was so filling, that Roman had only a few bites of the polenta until his fork dropped. Trust me, this does not happen very often 😉
Address:
Corte Campana, 3, 55100 Lucca LU, Italy
Hours:
Thursday-Tuesday: 12pm-2:30pm and 7pm-9:45pm. Closed on Wednesdays. 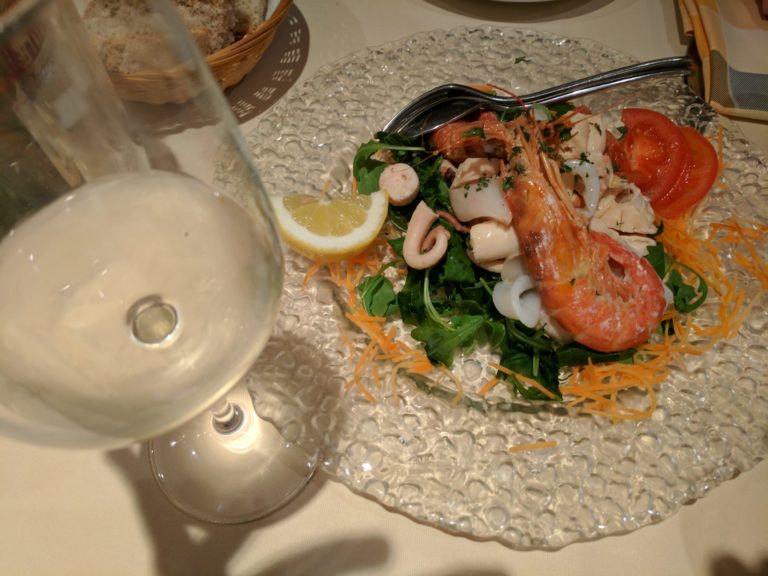 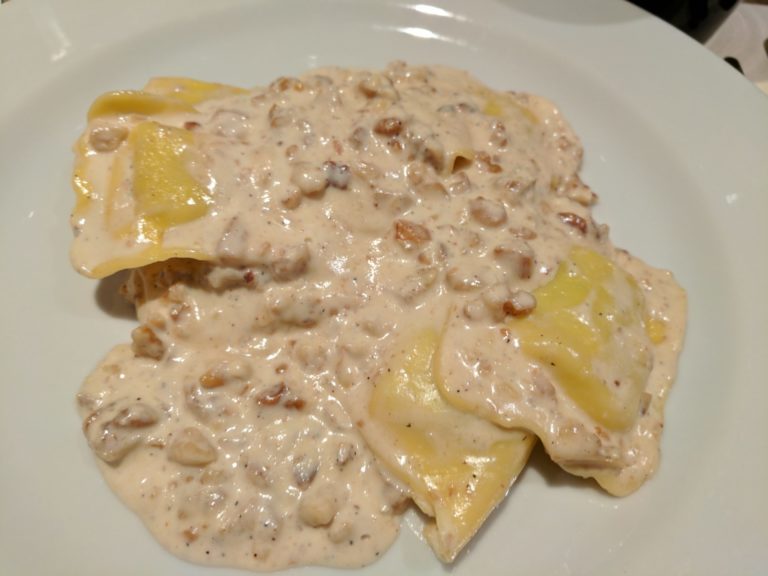 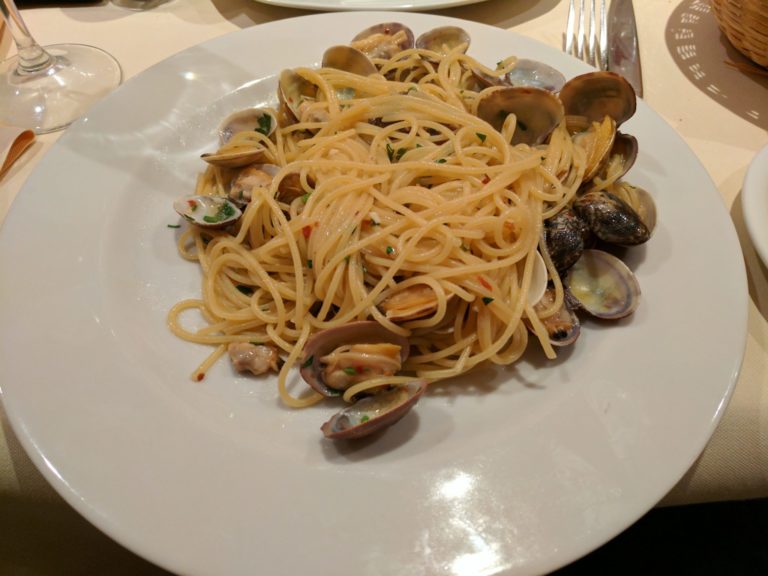 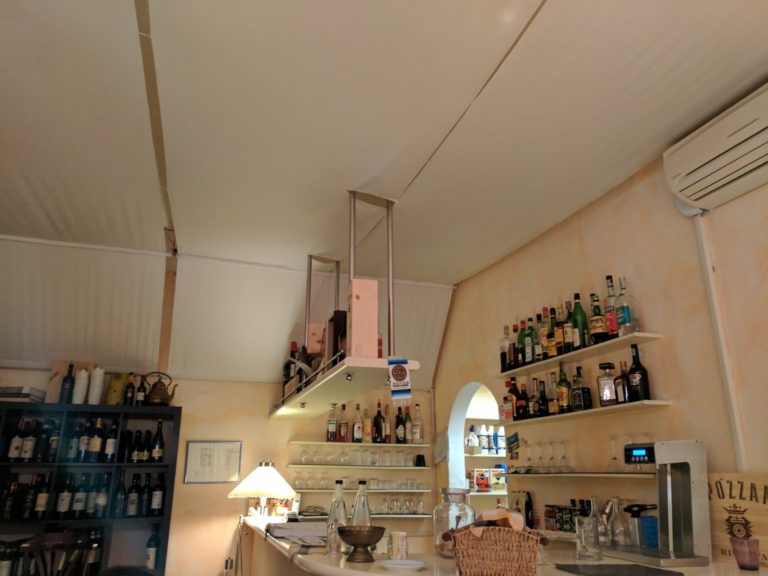 This is a lovely cafe with great pastries. On our second day at Lucca, we wanted to rent bikes and ride around the city, but it was pretty cold and rainy. So as an alternative we decided to sit at a cafe and eat something tasty until the rain stopped. We looked, and looked, until we found Bottega del Caffe Dersut. We saw that there was a large variety of pastries and it got some good reviews (we always check the reviews before we visit places.)

We ordered 2 cappuccinos and 2 croissants. It was nice, and it’s been so lovely to sit at this cafe. After a while the rain did really stop. We could finally continue with our original plan. 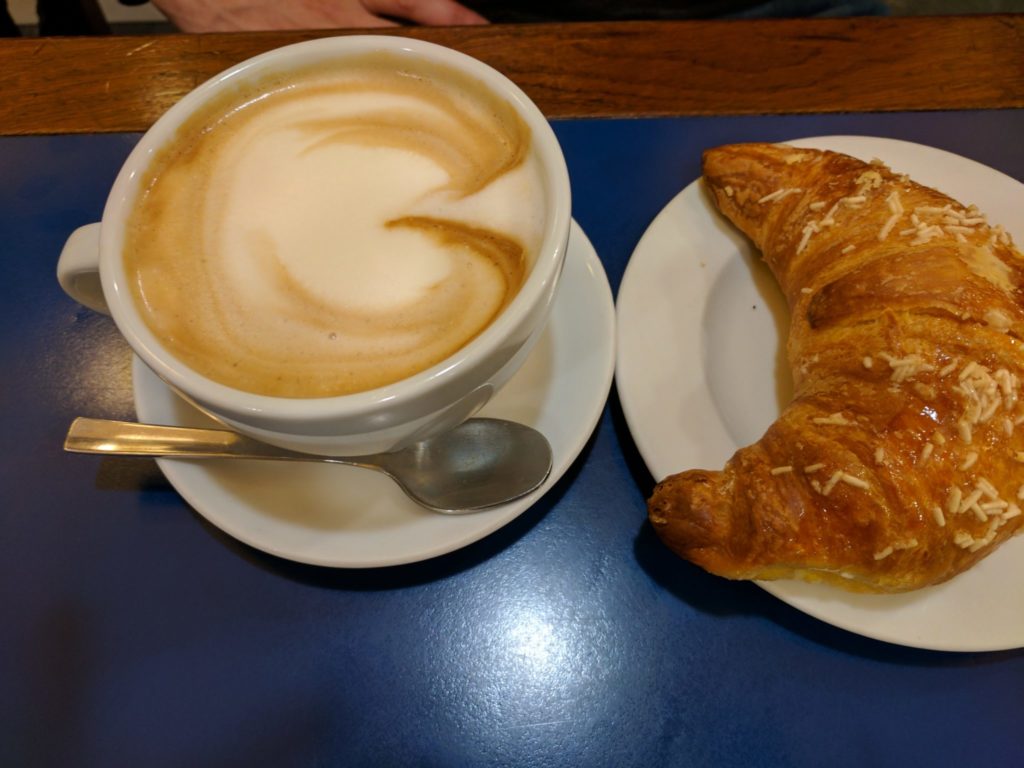 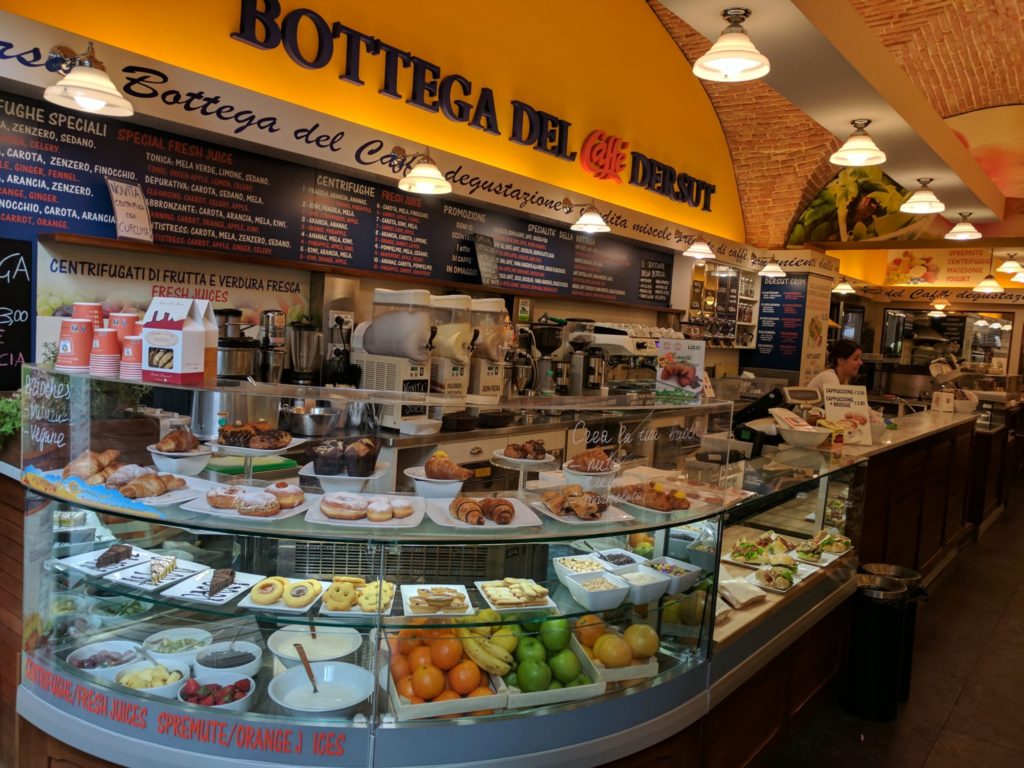 Lucca is filled with beautiful buildings, ice cream parlors, cheese and sausage delis, and there are even street artists at the central Piazza. The vibes are incredible. We only spent 3 nights in Lucca, and it’s a shame that we didn’t have more time to explore the city itself.

The location of Lucca is fantastic, it’s only an half hour away from an incredible winery called Viareggio, and a bit of a longer drive to Firenze, 40 minutes away to the village Monte Carlo. If you are ever around Tuscany, you should go for a day trip or even spend a few night. You’re going to thank me.

From Lucca we continued to Lake Como by a car.