Rome is so gorgeous. Everywhere you look, you will see an amazing Piazza or a stunning architecture.  Rome is full of history, good restaurants, cool bars, Delicious gelato, cute coffee shops and more.

In Rome we stayed at an Airbnb apartment near to Campo De Fiori market. You can Click Here and get $40 off your first order on Airbnb.

Things to do in Rome

Eat with the locals

We really love local experiences and when I looked at the “like a local” website (a cool website for recommendations from the locals) I saw a nice option for a dinner in a local house. The host’s name is Francesca. The meal cost 27 euro including the hosting in the local house, a meal and wine. BTW, there’s another website that offers meals like this that’s called “EatWith” (Francesca is also named in this page). I thought it was a really great idea, so we made a reservation for our second evening in Rome.

Francesca’s home is a little bit far from the center (about an hour ride in bus), but it was nice to ride in the bus to a different area that was less crowded in Rome.

When we arrived at her home, we were amazed at the way the table was designed and the smells from the food were so good .The apartment itself was decorated really nicely.

Francesca welcomed us with a smile and she also invited a partner, Pasquale, to join us for dinner. On the table the appetizers were already served, which were very delicious and Pasquale opened a great white wine for us. As a second dish we ate a really good pasta and for the main course, an amazing meat. For dessert Francesca made tiramisu. Everything was so delicious and simple; exactly the way I love it. The atmosphere was very clam and we had a great conversion with both of them.

All the experience was excellent and we loved the combination of good food and good companions.
We are definitely going to try this kind of meal in other destinations that we visit. 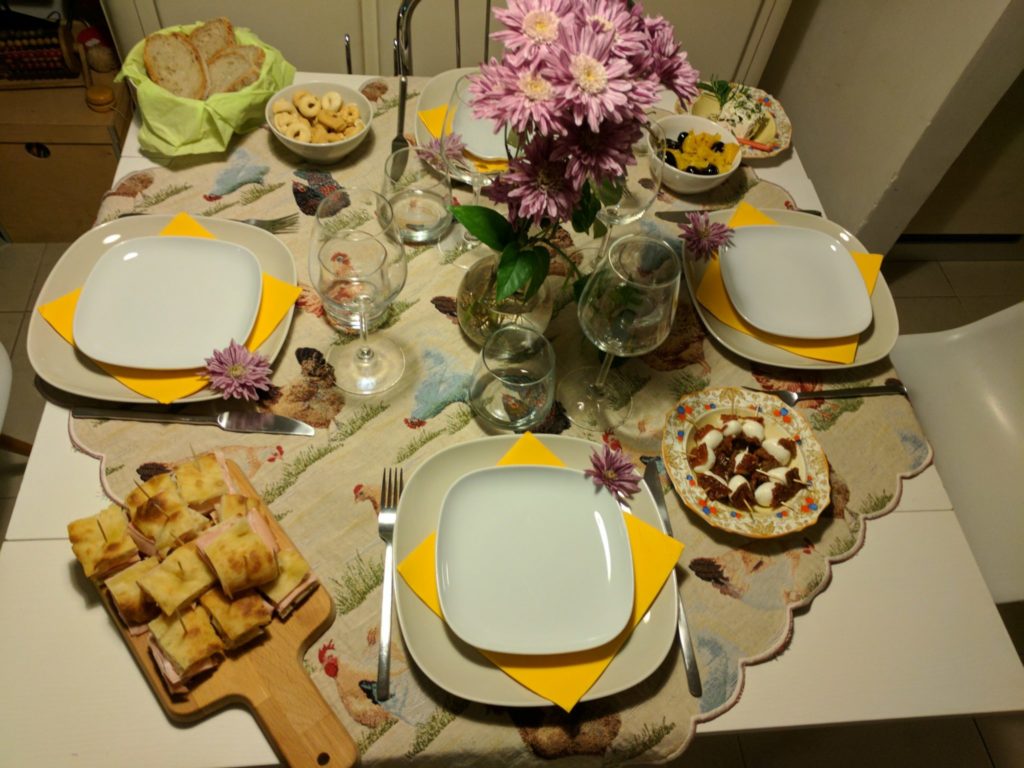 Visiting the Vatican at night

The Vatican is one of the places that you must visit in Rome, but I wanted to show you an option that maybe you weren’t aware exists. From the end of April till the end of October, every Friday you can visit the Vatican at night.

Fortunately, while we were staying there, it was the first Friday that people were allowed to visit in the night, so we booked our tickets in advance from the internet.

An entrance (16 euro) +audio (7 euro) + tax for the internet order (4 euro) so it cost 27 euro per person. The advantage in ordering on the internet is that you can skip the line (which is really good if the line is long).
In our case there was no line but we couldn’t predict it.
We arrived at the Vatican at 20:30

In the beginning we thought of taking a tour but I’m happy that we did it only with the audio. That way we could stop and listen about places that interested us and skip places that didn’t.  Another great thing about visiting it by night is that it’s not too crowded. There were even a few times that we were almost alone in a room.

I must admit that in the beginning I wasn’t sure if I wanted to visit the Vatican, but I’m so, so glad I did. It’s absolutely gorgeous. There were some rooms that left me speechless. What an amazing art. It’s hard to believe that in the past there were people who painted the same wall for 8 years. It’s one of my best art & museums experiences. 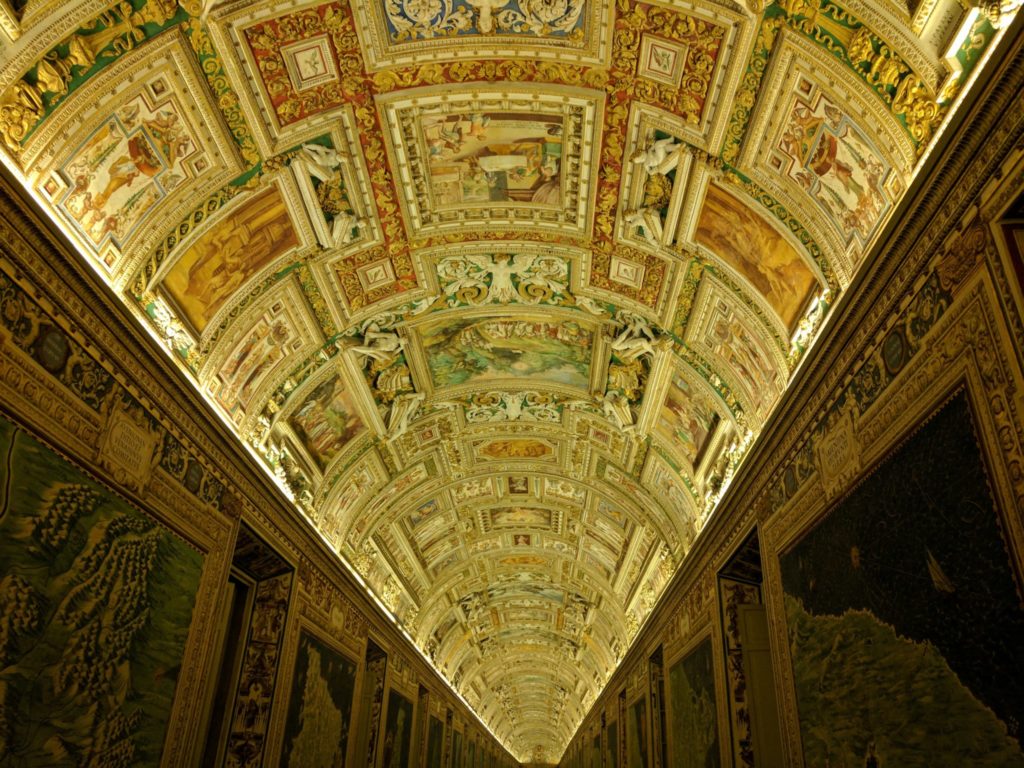 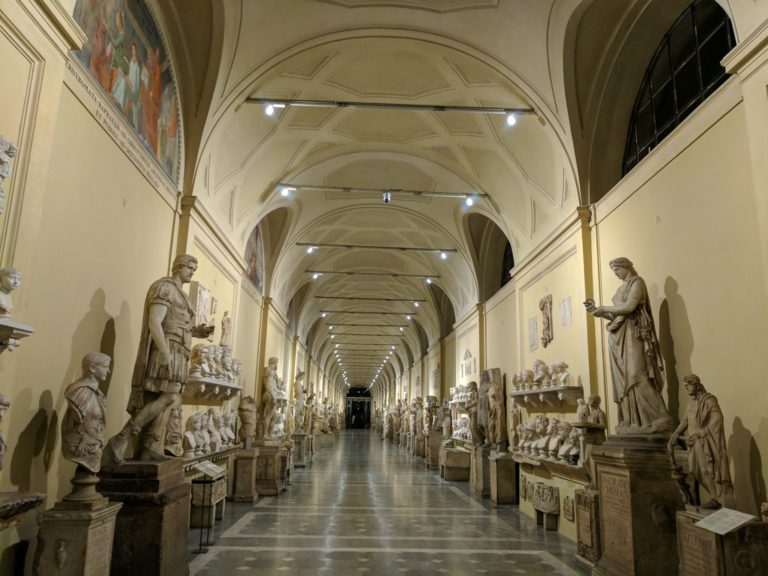 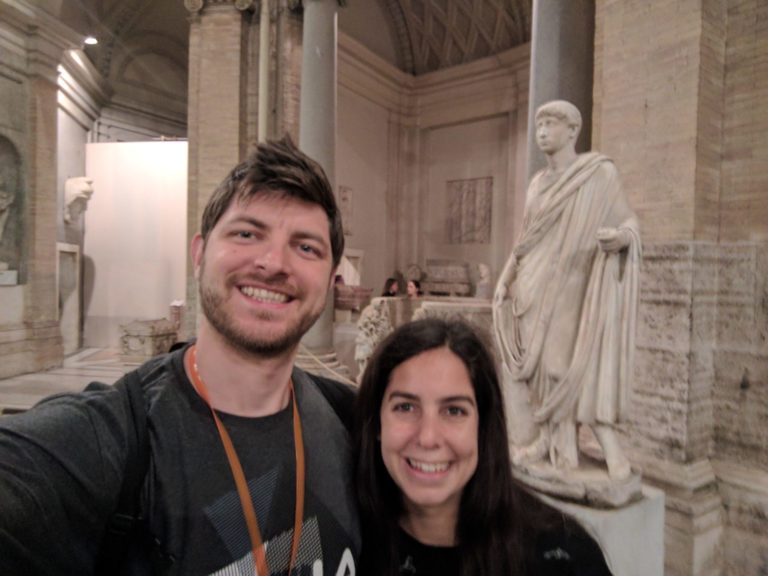 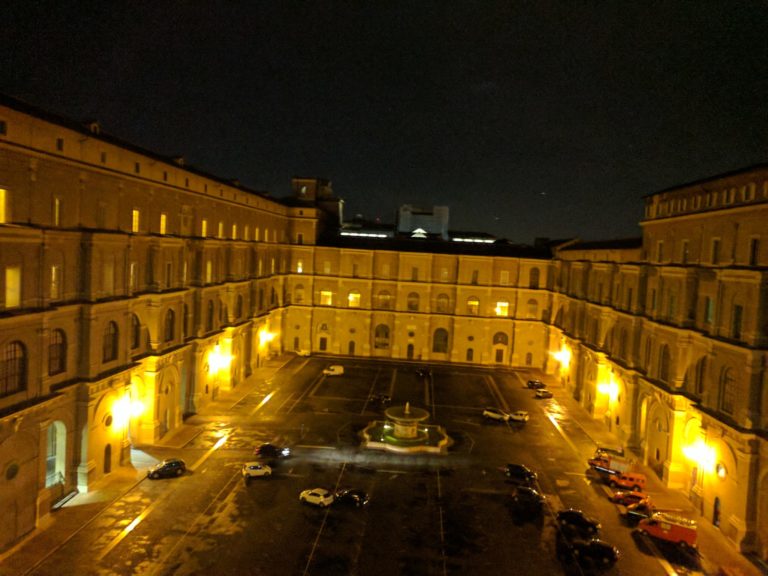 One of the places I loved the most in Rome. Why? Because it’s so beautiful and less touristy (at least when we visited).
In the Rose garden there are benches above the stairs which overlook the garden and city. You can sit there for hours and enjoy the beauty. You can also have a little picnic there.

The Orange garden is at about a 10-minute walk from the Rose garden. It’s less impressive than the first, but it’s really nice and the great thing about it, is that it has a great viewpoint over the city.
The gardens are located pretty close to the colosseum (about 30 minutes walking) so you can visit them on the same day. 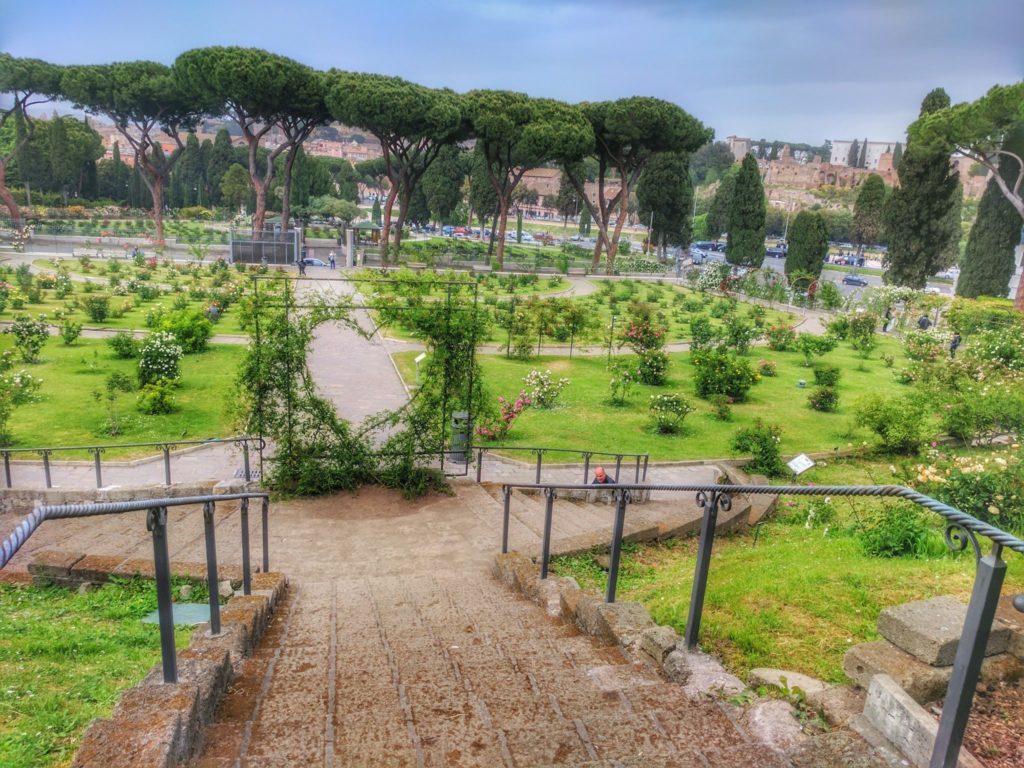 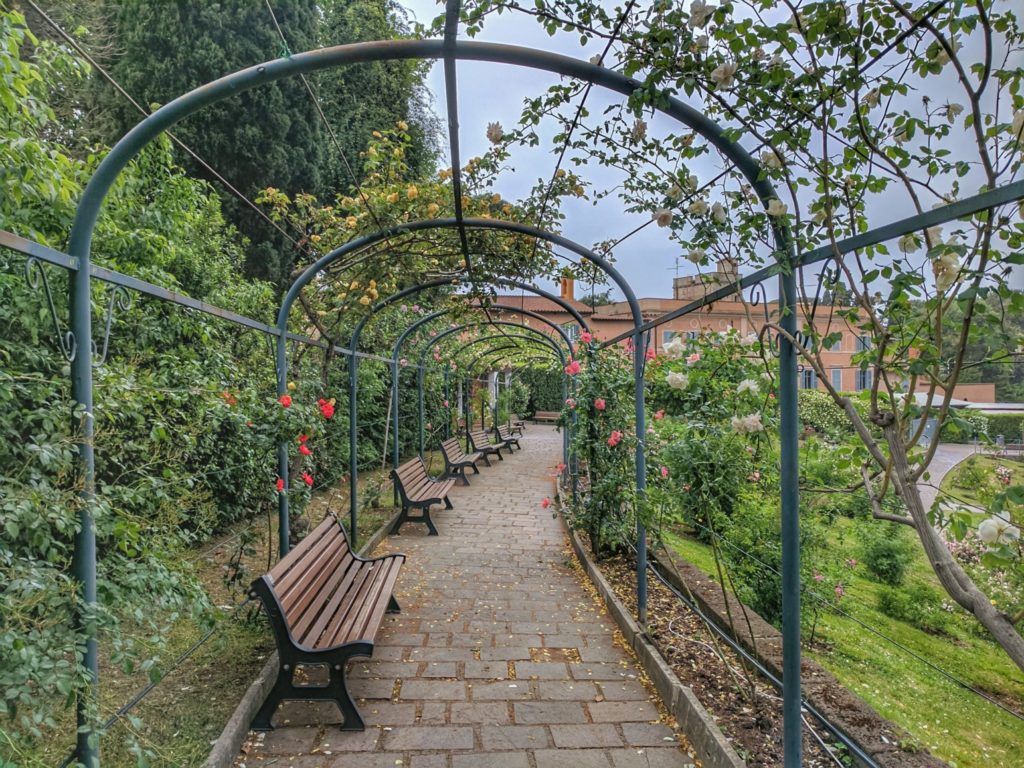 As usual, we booked a free tour (based on tips) in advance. We booked it for our first day in Rome for the afternoon (16:00). We wanted to get to know the city as fast as possible and there isn’t a better way to do so, other than a tour.

We arrived at the tour pretty exhausted because our flight was in the early hours of the morning, so we slept about 2 hours in the night, anyhow the tour was so fascinating that we did all of it and had a blast.

The tour was with the company “Rome’s ultimate”.
There were several things that I really loved about this company.
Their tours are only for small groups of up to 15 persons. That’s awesome because in large groups it’s hard to ask questions and the guide can’t pay attention to everyone.

And because the group is small the guide doesn’t need to walk with an umbrella (as a sign) so it feels less touristic and the best thing was that our guide was amazing. His name is Jobe and he was funny and told us a great story about the places on the way (instead of boring facts). He really described the way it was in the past so it was easy to imagine it.
I really recommend this company. They also have other tours but we only tried the free walking tour. 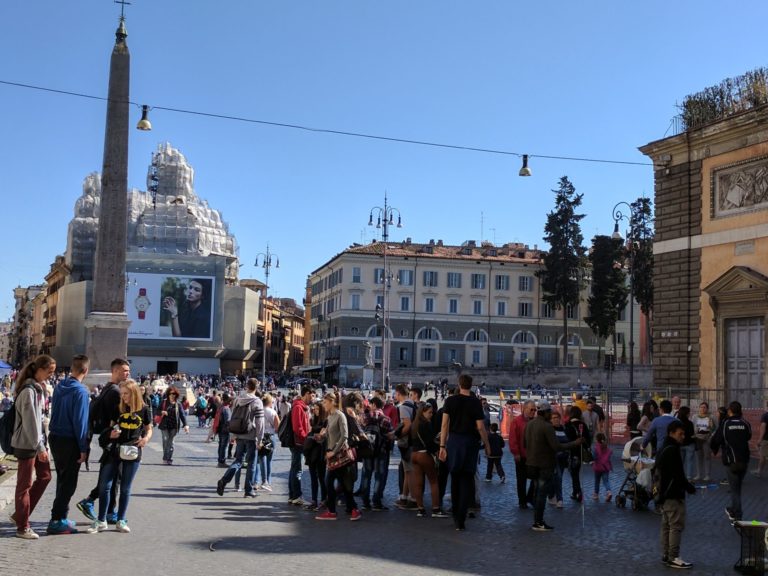 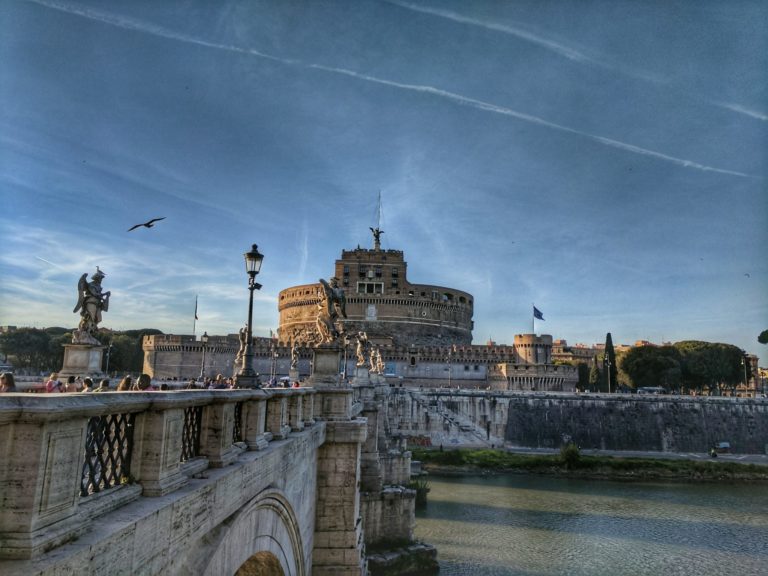 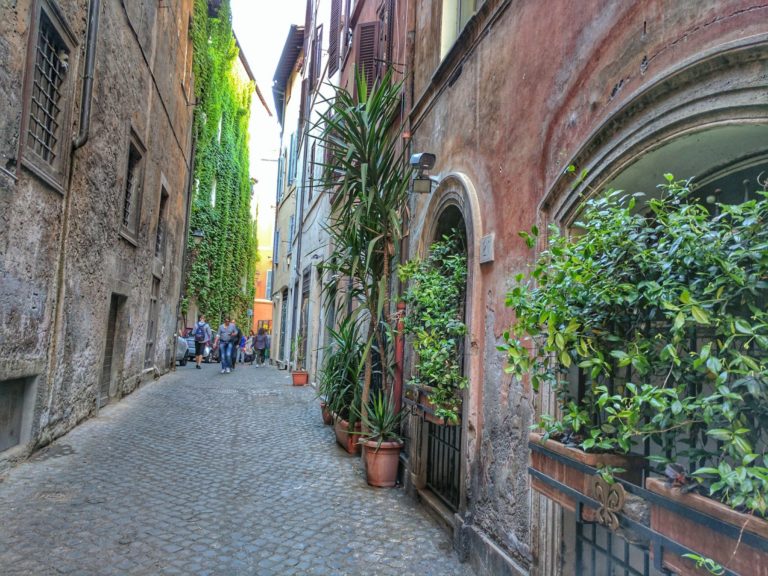 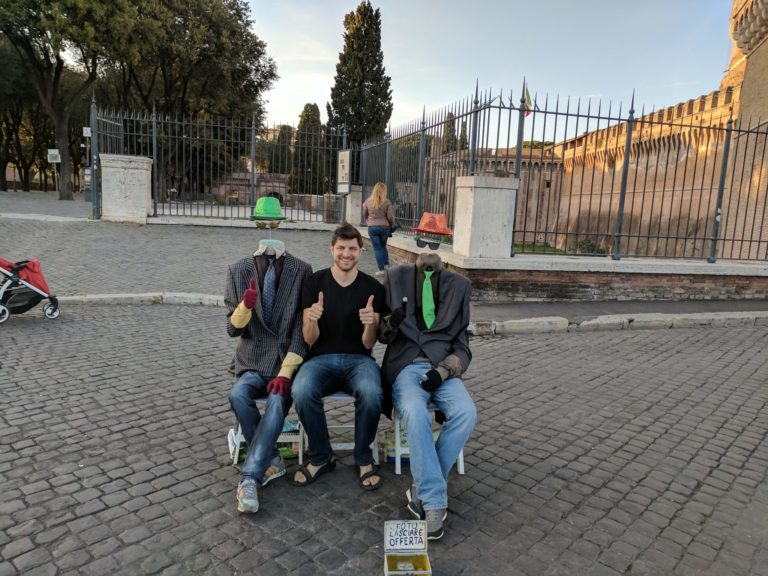 We heard about this church from our guide in the tour. We asked him for  unique recommendations of things to do in Rome and this was one of his recommendations. It sounded interesting so we went there.

There are two churches in the building, so in the beginning we accidently went to the wrong one. But then we went to the right one. The Santa Maria della Concezione dei Cappuccini church. The entrance cost 8.5 euro. A little bit pricy but we were curious to see how it looked. It’s forbidden to take pictures there and I think it’s good because it keeps it mysterious and surprising when you go there (so don’t look at pictures from the internet). I can’t say it’s a pretty church, but it’s definitely different from all the churches I’ve seen before and it’s really interesting and impressive. In this church there are more than 4000 bones. 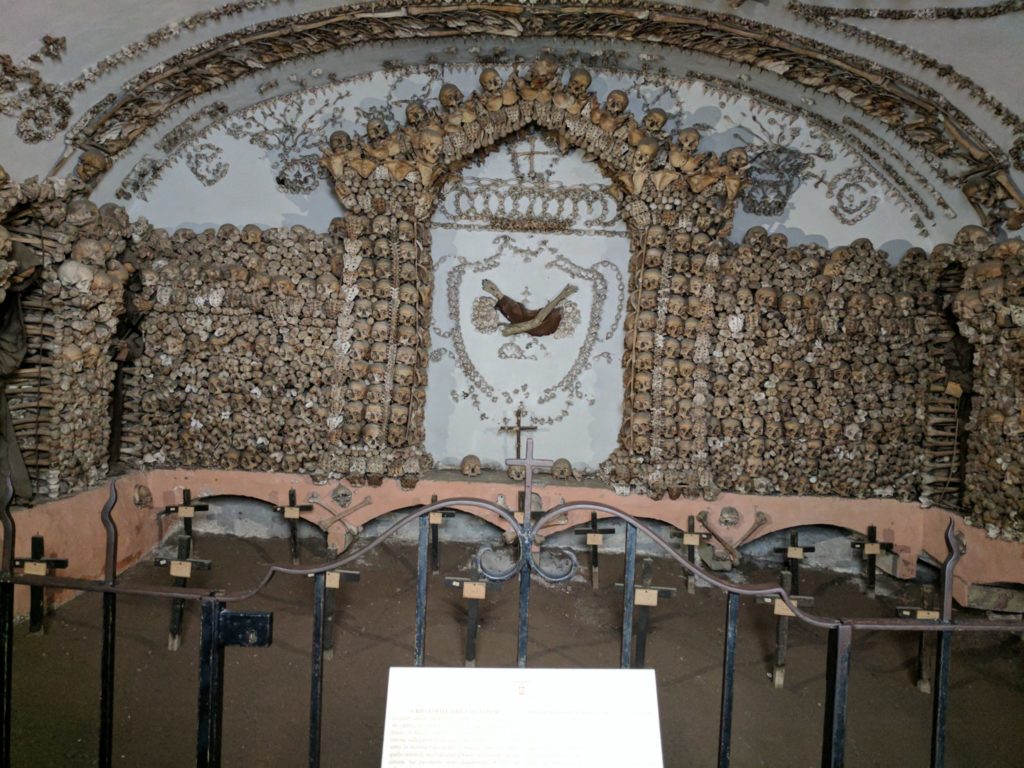 There is no way we would visit a city without going to at least one local market. In Campo De Fiori we visited one every day and sometimes even several times a day because it was 100m from our apartment (we chose the Airbnb apartment because of its location).

This market is so great/ it’s not crowded it’s filled with local, fresh ingredients. I ate fruits there, Roman bought a sausage and cheese sandwich. In our last day we bought 5 different cheeses in order to have a picnic on our way to Lucca. The cheeses were delicious.

If you are renting an apartment in Rome, this market is a great place to buy local ingredients to cook in the apartment. The market is surrounded with many good restaurants, bars, and coffee shops.
The market is open from Monday-Saturday 07:00-14:00 (sometimes even later) closed on Sundays 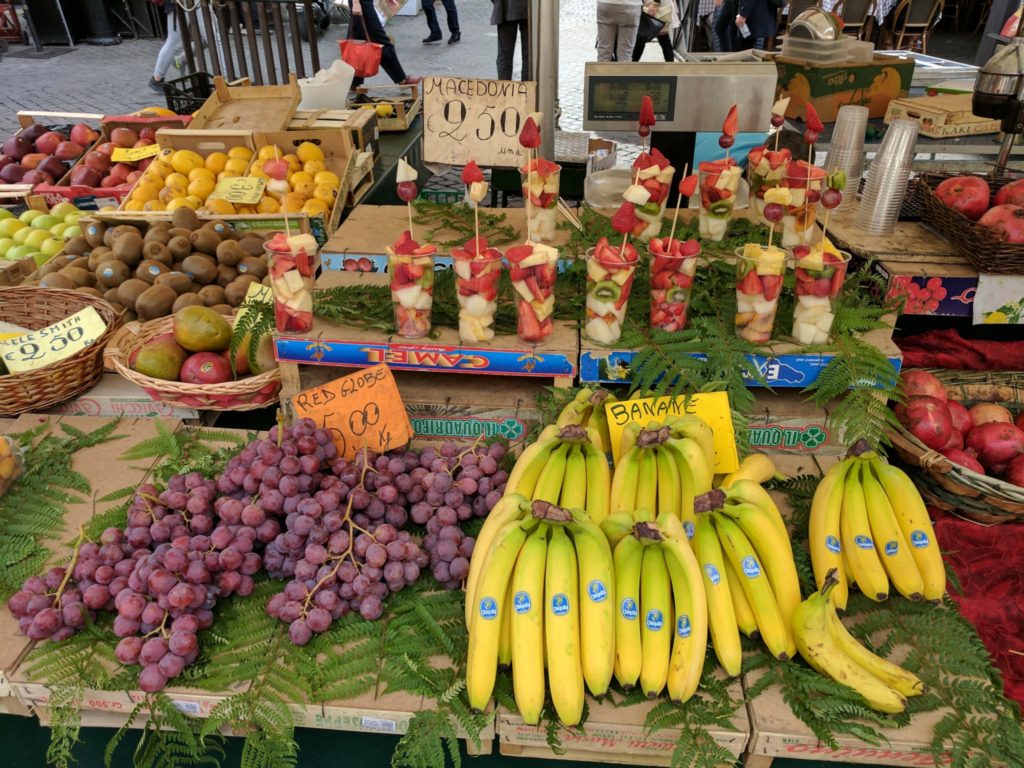 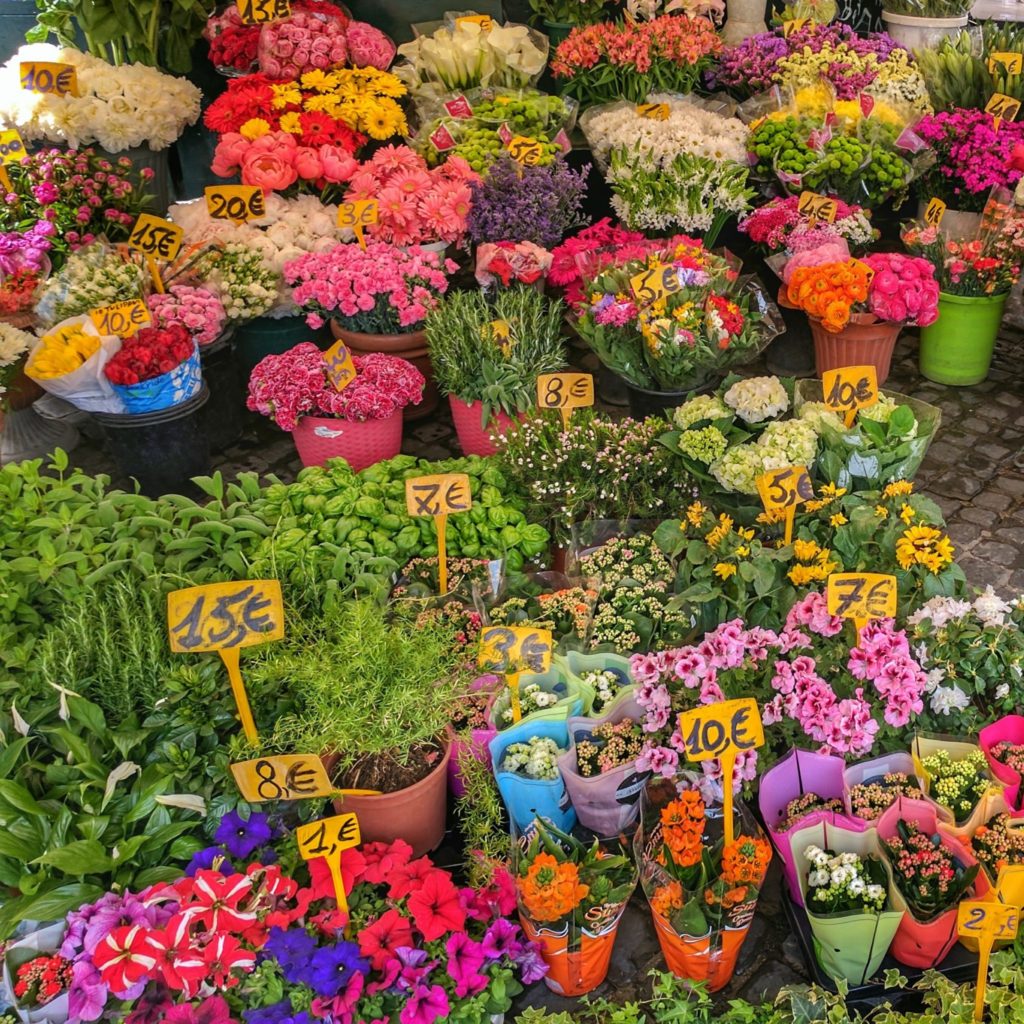 Palatine Hill and the Colosseum

After the Rose and Orange Gardens we wandered around and saw the Palatine Hill by accident. It’s such an incredible place. “The Palatine Hill is the centremost of the Seven Hills of Rome and is one of the most ancient parts of the city. It stands 40 metres above the Roman Forum, looking down upon it on one side, and upon the Circus Maximus on the other” (from Wikipedia).

We wandered around there for about one hour and a half and then we went by foot to the Colosseum. All this area was so impressive and huge and so amazing. It is worth visiting for several hours. 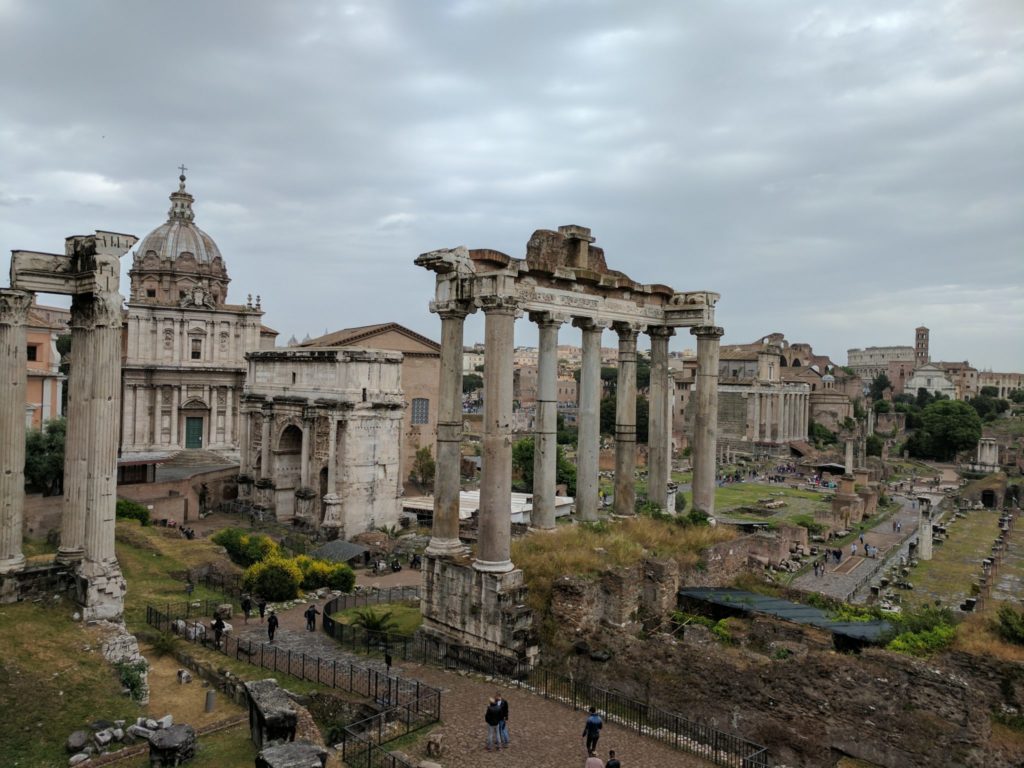 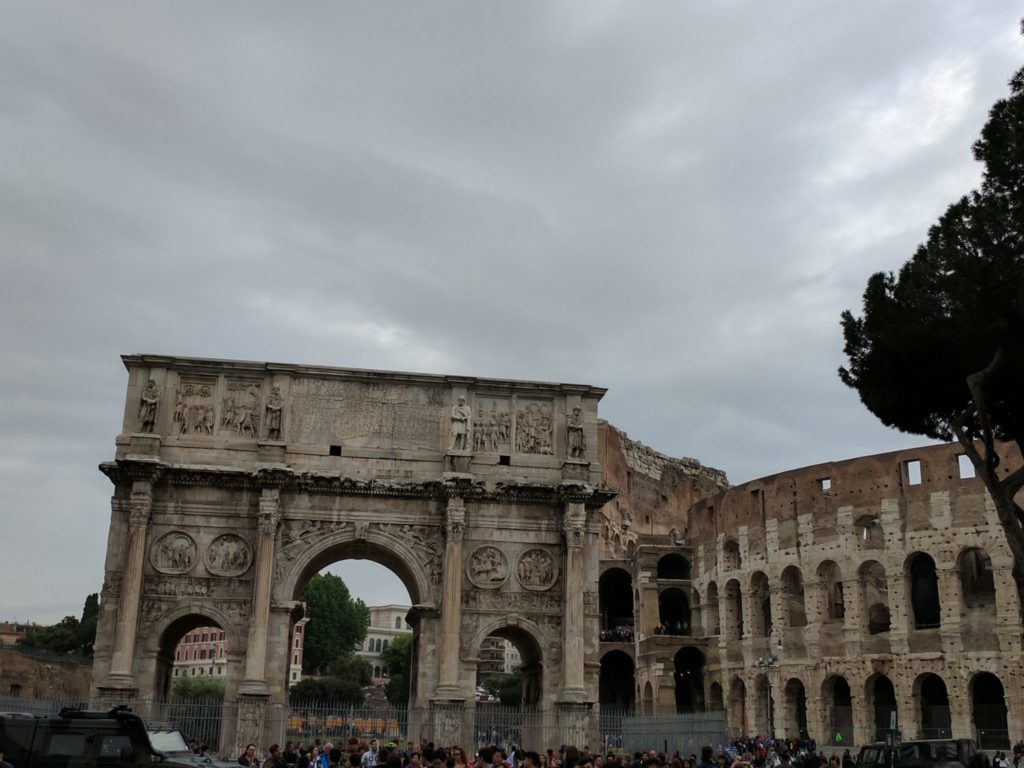 I’m a massage addict 😉 and luckily during our stay in Rome I had my birthday, so it was a great excuse as to why I should so a massage and Rome is so big and every day we walked there so much time that in the end of the day my feet needed a massage.

I searched for a recommended place and I found “Nora Thai massage”. They have great reviews and one of their branches was close to our apartment.
Address: Via Del Gesù 56Roma.

A traditional Thai massage cost 50 euro for 60 minutes. It’s not cheap but it’s a reasonable price.
I really liked the place itself. Very clean, it smelled very good and with calm atmosphere. The room treatment was very welcoming and it even had its own private shower.

The massage itself was fantastic; it was a great present for my birthday. 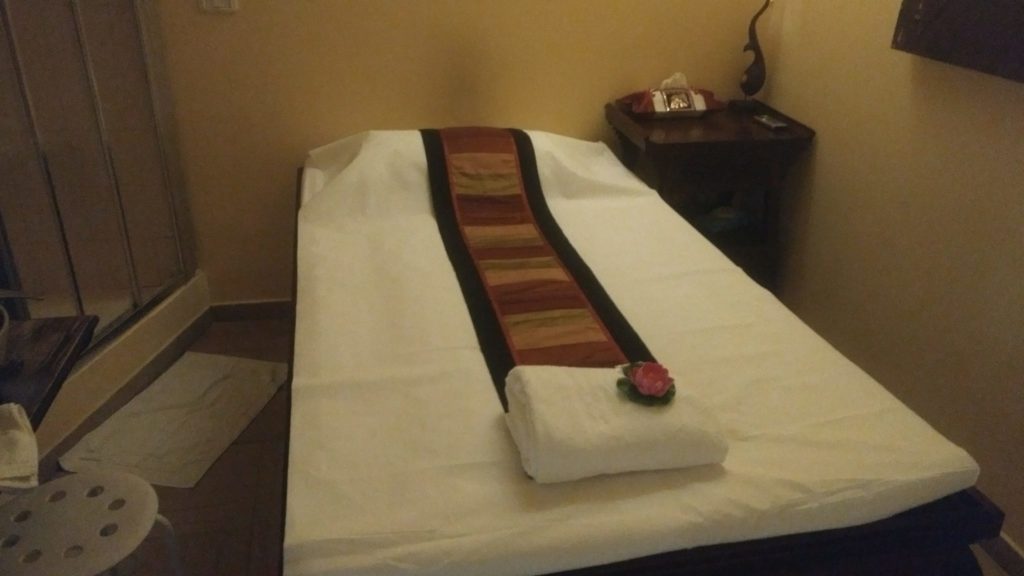 Even though I’m not a huge fan of ice creams, everyone told me I should try it in Italy, so I just had to. And I have to be honest; it was really good. We stopped on the way in Venchi Gelateria that afterwards we discovered that it’s one of the most famous and best in Rome so we were lucky.

I tried the caramel flavour in a cone topped with chocolate and nuts. And Roman tried the mango and strawberry sorbet. They were so good and the Gelateria itself is really awesome. They have a chocolate waterfall wall. Wow. 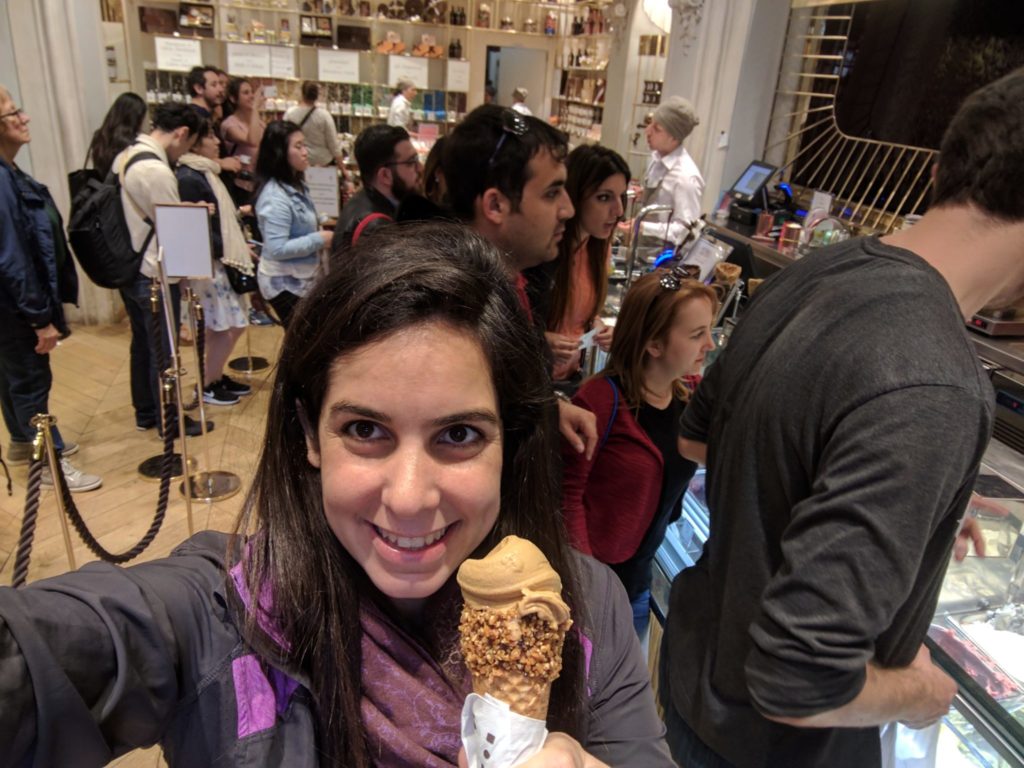 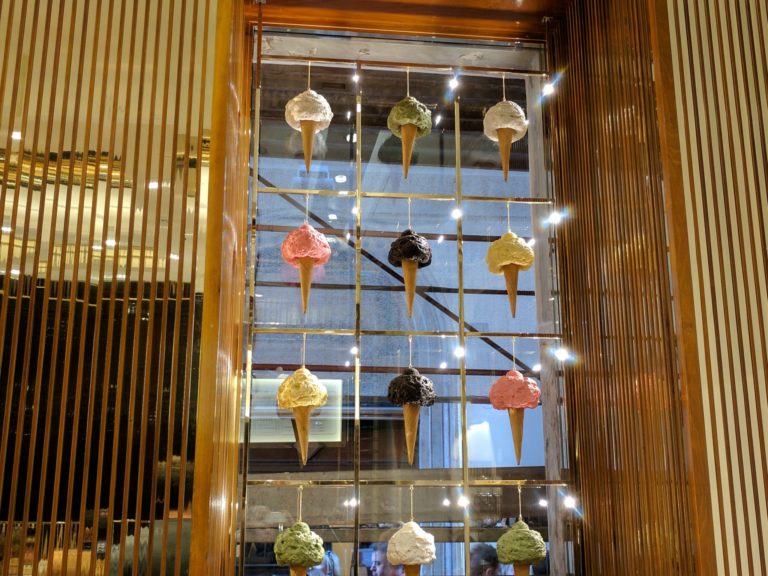 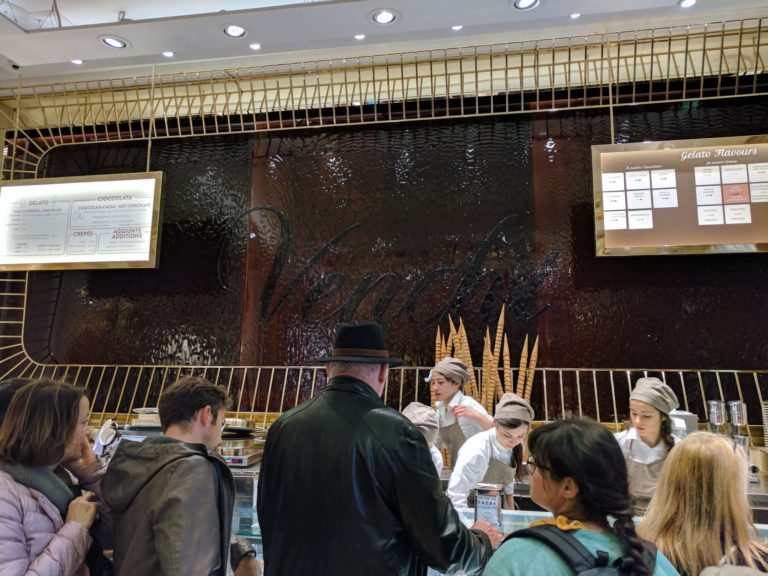 Wandering around Rome and enjoying its beauty

Rome is so stunning, it’s hard to describe it with words. Every few seconds we would stop and say, “Wow, this is amazing”/ every five minutes of walking you will encounter a beautiful Piazza (where you can sit to relax). Every two minutes you see another impressive structure. Rome is full of great restaurants, coffee shops, shops, wine bars, and people. It’s a city that is a must. 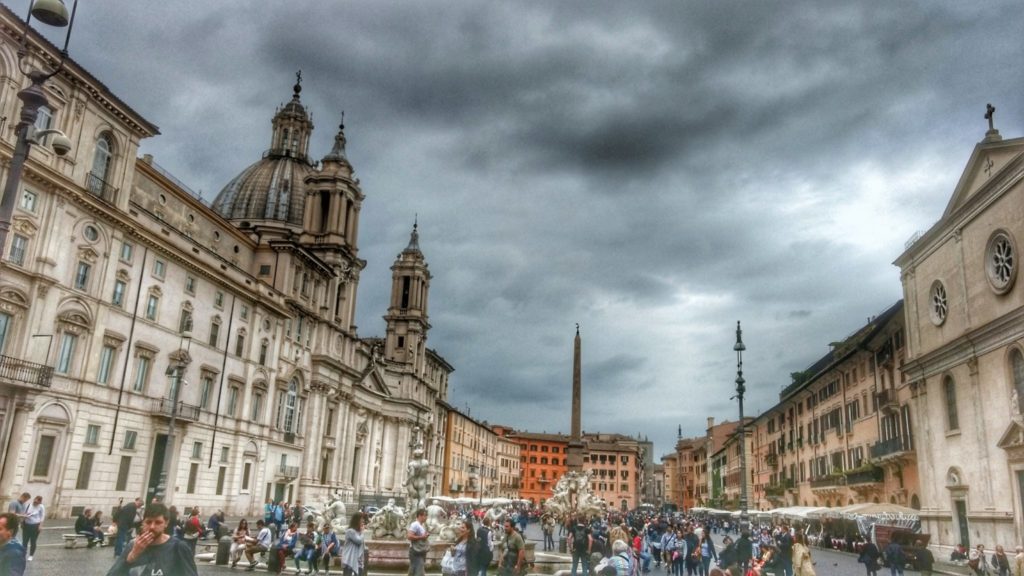