Our trip to Finland was an independent trip. We built the track ourselves and searched for special attractions at every destination.

Prior to the trip we realized that it was worth visiting the city of Rovaniemi (located in Lapland) because it has many winter attractions such as snowmobiles, a zoo, night tours following the northern glow, sledding with husky dogs and more …

Since we knew we were going sledding with deer and dogs at the Northern lights village, we decided to look for a snowmobile attraction.

I searched the Internet for companies that offer snowmobiles and finally chose Arctic Life , which had good reviews online. This company also offers a wide range of attractions for both the winter and the summer.

Snowmobiles in the mountains experience

On the day we did the snowmobiles the temperature was of -30 degrees. It was our coldest day on the trip, which made the experience quite extreme for me.

On the day of the attraction we arrived at the company office, located in the city center. We got there at 9:30 and our guide came with a van to pick us up. We were joined by a couple from Switzerland who were also in Finland for the first time. We drove by car up to the mountains, while the guide told us a little about their company and about riding the snowmobiles.

About 20 minutes later we reached the company’s compound in the mountains. We entered a large area with a lot of equipment for snowmobiles. Each of us was given a winter overall, snow boots, wool socks, a wool mask, gloves and a helmet.

After we wore all the clothes and took a few photos, the guide had us sign a statement saying that in the event of an accident that we are responsible for, there is a deductible sum of 1000 euros for the damage caused. There is the possibility of getting insurance if you want (For an additional payment).

Only the one driving the snowmobile must sign. At that point, I was still optimistic and naïve, and thought there would be a stage where I would also be driving, so I also signed the statement. 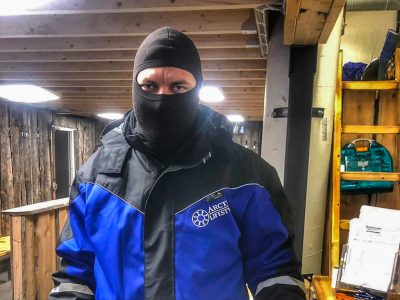 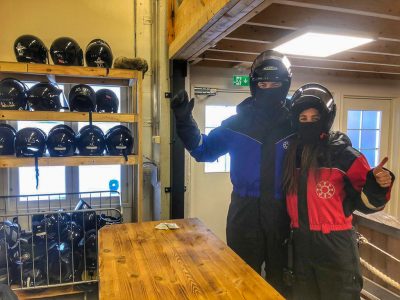 We then went out into the cold and our guide told us about driving the snowmobiles. Basically, operating the snowmobiles is simple and there is no need for prior experience or a special license. Anyone who has a car license can drive them. The challenging part is turning, as you need to make the turn slowly to stay on the snow trail and not stray towards the trees. 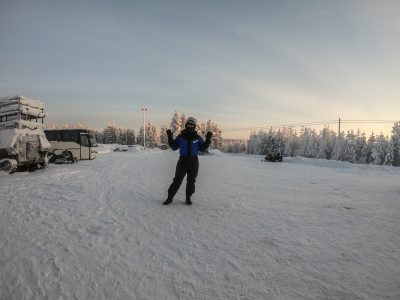 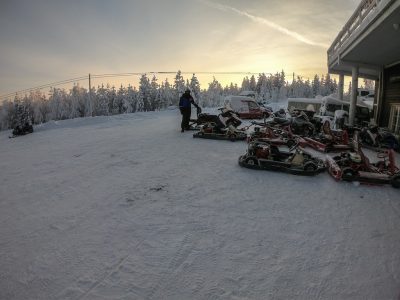 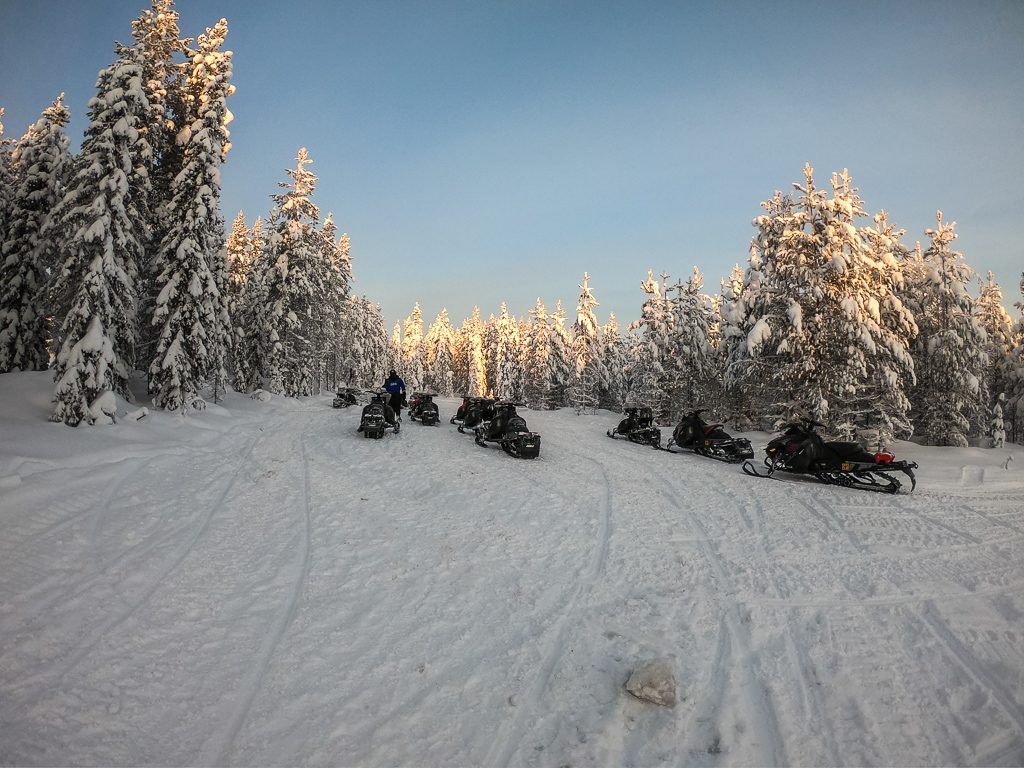 I told Roman that he would drive first and then we would switch (hint: it did not happen at any point and the truth was that the girl from Switzerland did not switch with her husband either :)) and I sat behind him. We began the trip through the snowy mountains, among the trees.

The experience itself was special and white. At first, we drove in the snowy forest, and after about half an hour of driving we reached the frozen lake and drove on it.

The view at the lake was incredible, but unfortunately, we couldn’t get a picture of it while driving. Everything was white, it’s an enormous area and it was cool knowing we were driving over a frozen lake. It’s not something you see every day, and definitely a great reason to go for this attraction.

In the middle of driving we took a short break to take some pictures and then we drove a little slower and the guide stopped occasionally to tell us about special trees on the way. At a certain point I got was really cold, and felt as if my face was frozen, and my palms froze despite the gloves we were given.

I have to say that the equipment was really very good and Roman and the couple who were with us did not complain about the cold, but for me personally it was not enough. The guide was also really nice and when he saw how cold I was, he tried to give me tips such as holding the bike handles tightly, as that causes more blood to flow to the hands, which should warm them a bit and he also tried to fix my hat to cover more of my forehead.  The route was circular and finally we reached the starting point where we changed our clothes and returned all of the equipment. 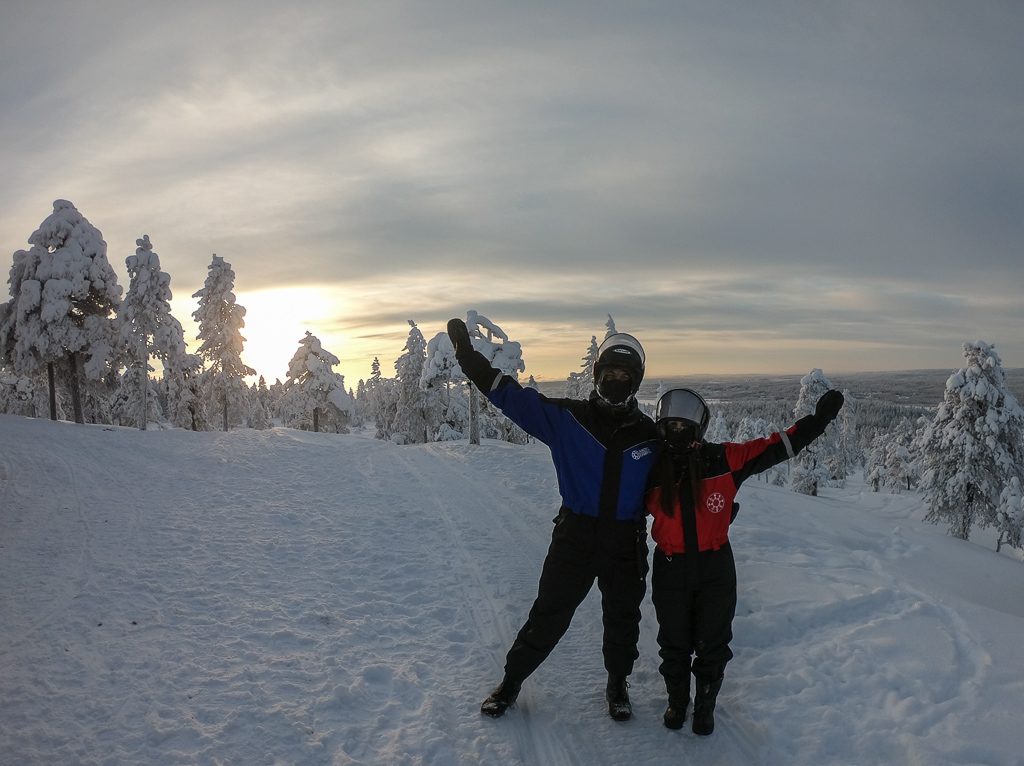 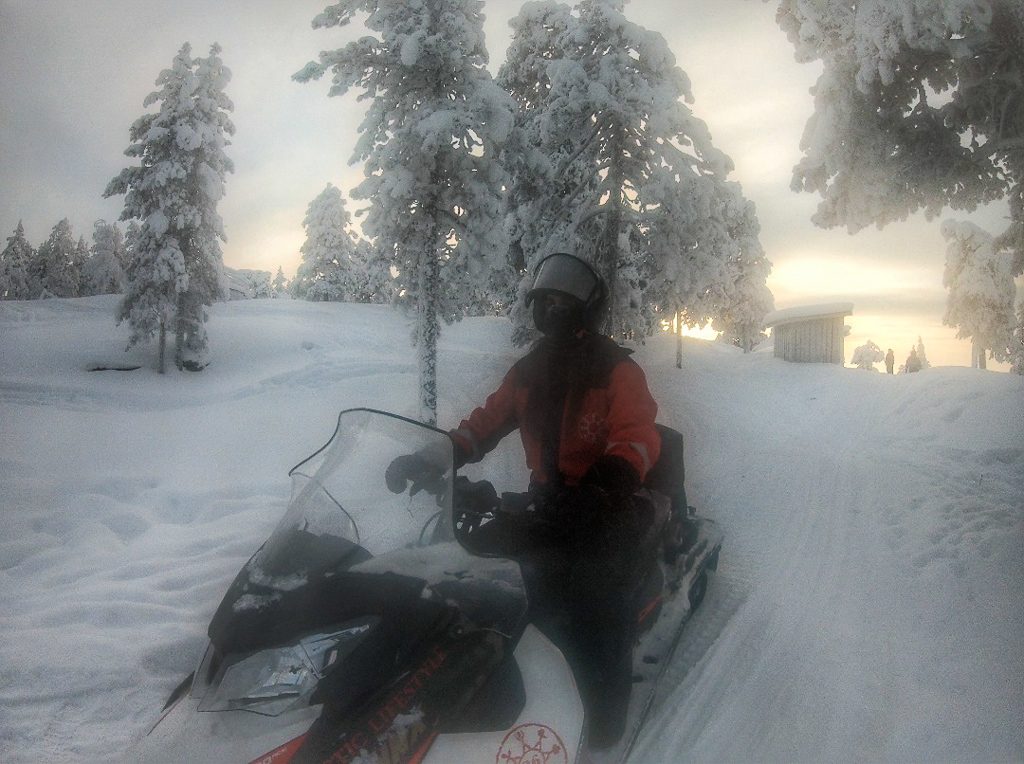 The snowmobile attraction is definitely one worth doing in Finland and is a combination of extreme and beautiful views. The Arctic Life company also offers ice-karting.
I’m sure that if it was slightly less cold, I’d have enjoyed it much more, but Roman liked the experience a lo, as did the other couple.

Tips for handling the cold

*The attraction was as part of a cooperation with the company