I began planning our trip to Finland six months in advance. The truth is that I never got to traveled in the winter with snow attractions, and I was very excited by the decision to fly there.

I planned a one-and-a-half-day course in Helsinki for Roman and I, from there on to Saariselka Lapland and Rovaniemi, then back to Helsinki and from there to Israel.

On the way back we had only a few hours in the city and so we stored our suitcases at the Helsinki airport. It is possible to put the suitcase in a locker or luggage storage service and the cost is € 6 per suitcase (for a locker or suitcase storage). This is a very good option for those who want to leave the airport for a few hours and then come back.

Our trip took place in late January and early February. There was cold weather that required advanced preparation, such as warm clothing for the trip. You can also buy clothes and equipment in Helsinki if you’re missing anything.

Helsinki is the capital of Finland. It is a compact city that can easily be explored on foot. You will find design, architecture, culture and shopping, and there are things to do there all year long. In the winter it is very magical and in summer you can visit its large parks, forests and lakes.

How to get to Helsinki

Where to stay in Helsinki?

We slept in a charming Airbnb apartment in a relatively central location (15 minutes walk to the train station and the city center).

If you do not already have an Airbnb account, here is a discount coupon of NIS 150 for your first booking.

The SIM card surprised us. I was sure it would be expensive because Finland is considered an expensive country, but it was really cheap. The card cost 7 euros per week for unlimited internet. We bought it at a convenience store at the airport before leaving it.

Getting from Helsinki Airport to the city center

It’s very simple. There is a direct train from the airport to the city center and it arrives every 10 minutes. In the convenience store where we bought the SIM card, we also purchased a train ticket which costs € 5 and is valid for two hours from the moment you first use it. This means that if you also need a bus after train then you can use the same ticket.

The trip to the city center takes about half an hour.

Transportation in the city

Helsinki is considered a relatively small city and you can walk it by foot, but if it’s a winter and very cold like it was during our trip, we ended up using Uber often (through the Uber app). If it is not too cold, buses can also be taken. Public transport in Helsinki is very well developed and easy to use.

Recommended things to do in the city of Helsinki

Free tip-based tour in the city

One of the things we like best to do in a new city trip is to take a free tour (based on tips) in order to get to know the city better and learn about the city’s and country’s history. We took the tour through the Free Tour company (Link to tour). We booked it in advance, but you can also just come to the meeting point in the main church 10 minutes prior to the tour (the tour does not take place every day so check the site for dates and times). The day we did the tour on was snowy and we thought we would be the only ones on the tour, but we ended up being a large group of about 30 people. We had a charming guide named Kasper, who spoke about the city in English.

The tour of the city in the snow was not simple but it was certainly interesting and worth the effort (tip: if you do a tour in the snow, I recommend bringing heating bags and putting them in the pockets of your coat, it helps).

The tour lasted just over two hours and Casper also gave us some good tips for restaurants and recommended bars along the way. 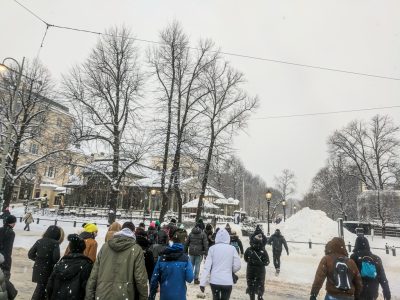 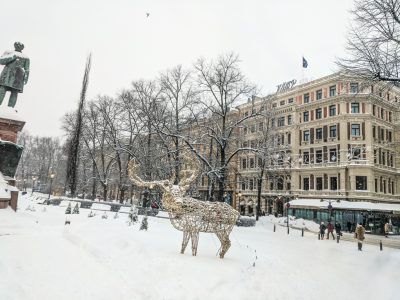 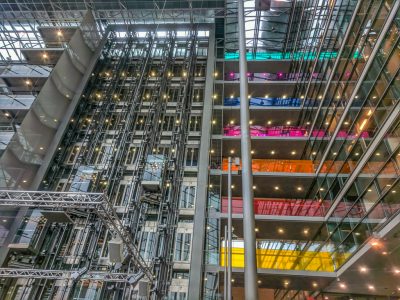 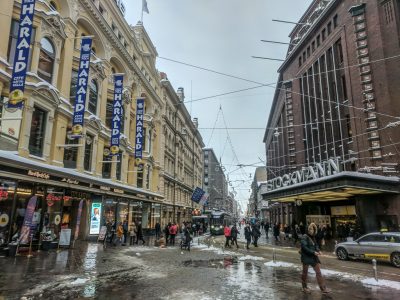 After a tour of the city, we stopped at a point 10-minutes away from Temppeliaukio church, called Rock church in English. This is one of the most special churches I have ever seen, and I definitely recommend visiting it. Entrance to the church costs 3 euros. The church’s cavity was hewn in granite bedrock, and the rock walls are 5 to 8 meters high.

The church is very peaceful and there were hardly any people in the background, and soothing music was playing. This is the kind of place you can go to and just sit there without doing anything for a while. Map 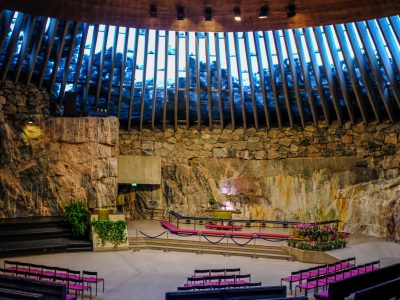 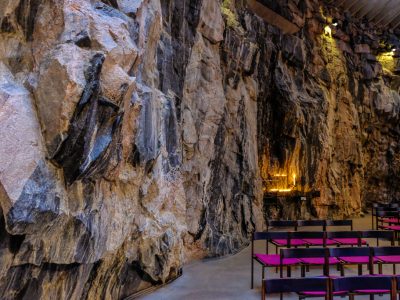 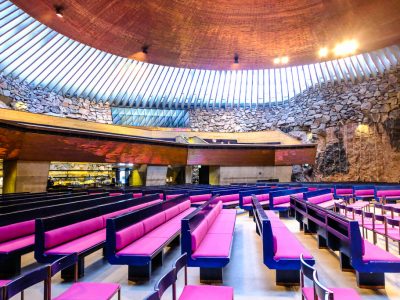 Finland is a paradise for salmon lovers and an excellent place to taste the salmon is at the Old Market Hall. In this market there are several stalls where you can find local dishes and try different types of salmon and salmon soup which is considered a famous soup in Finland.

We passed through this market on the tour and after visiting Temppeliaukio we returned to it for a late lunch. I ate a delicious salmon sandwich and Roman tried the salmon soup and loved it very much. There is also a wine shop in the market, a home-baked breads shop and other local produce. Map 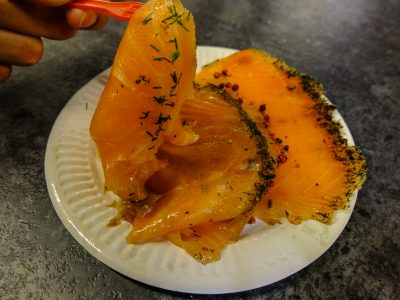 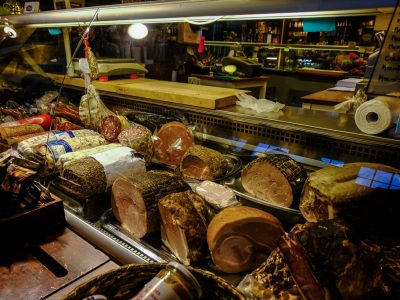 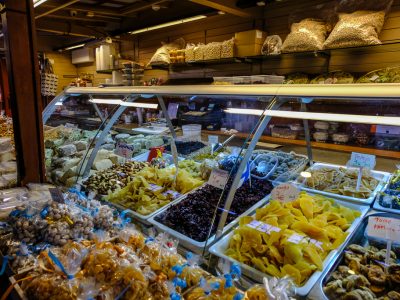 This is the famous cathedral in Helsinki and there’s no chance you’ll miss it. It is also the meeting point for the tour.

This is one of the most impressive cathedrals I have ever seen. Especially on a snowy day when the sky is almost white, and all the stairs are white. The cathedral’s interior is nothing special, but the exterior is stunning. Dedicate some time for photos 🙂 Map 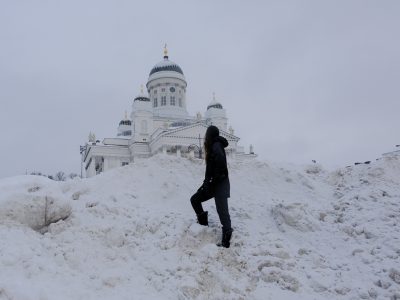 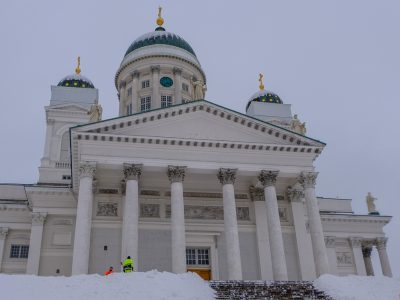 The Orthodox Cathedral of Uspenski 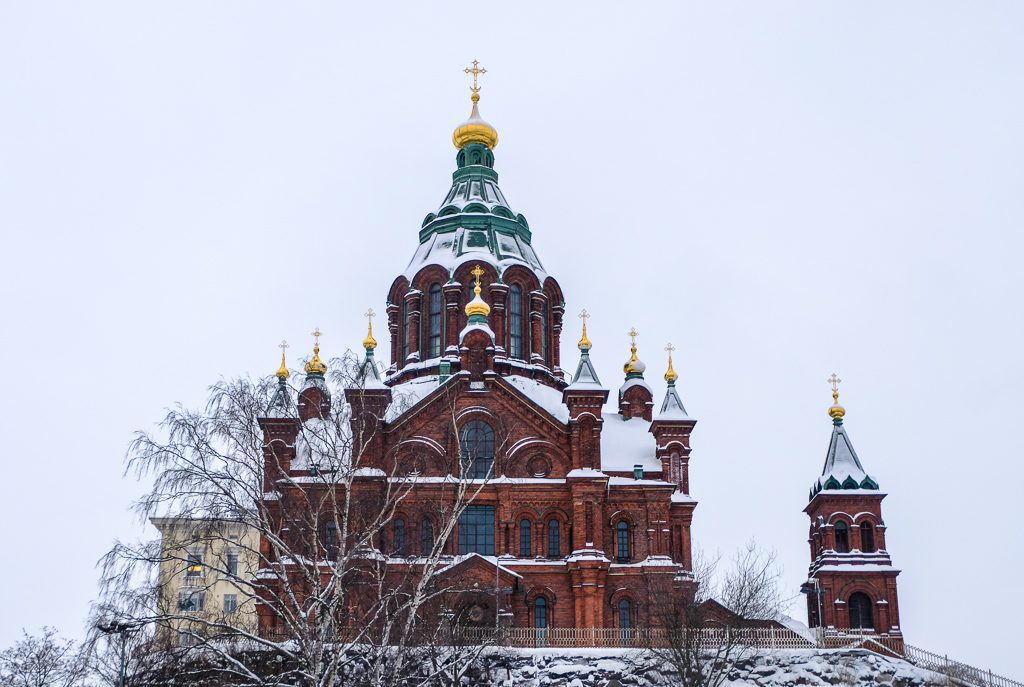 Before visiting the city, I’ve done some research on recommended restaurants and found Grön, which had great reviews. We decided to have a luxurious dinner on our evening in Helsinki.
We booked a table in advance (Recommended, as the restaurant was full on a Wednesday night, so I assume it’s packed most evenings). They have a structured dinner menu of 4 dishes costing 60 euros a person. You may add additional dishes at a cost (There are three additional options).

The service was flawless and definitely up to the standard of a gourmet restaurant, and the food was unique and varied. The dishes were all made of seasonal, local ingredients. Our favorites were the scallops and dessert. If you’re looking for a good high-quality restaurant, this is an excellent choice. Map. 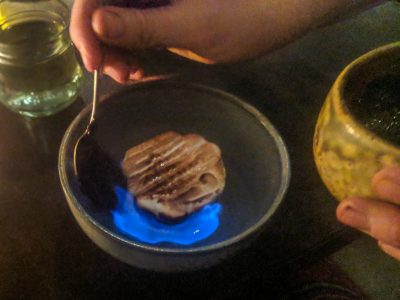 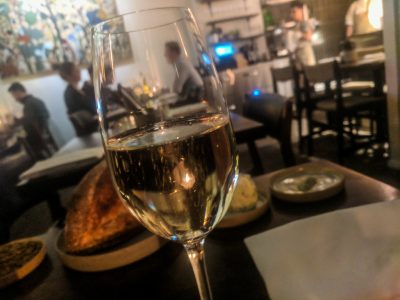 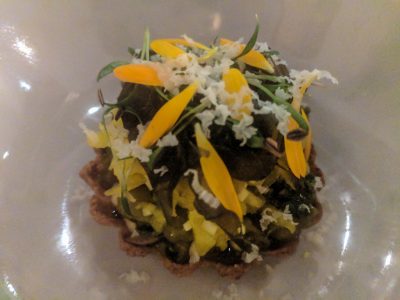 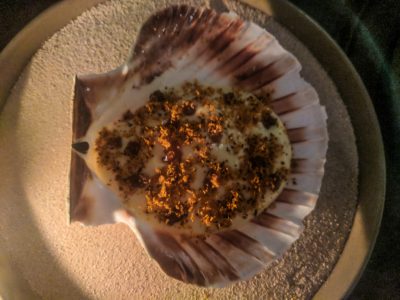 On our last day of the trip, we returned to Helsinki from Rovaniemi on a flight and had four hours to pass in the city. I looked for a good cafe to visit and found the La Torrefazione coffee shop which got good reviews.

It is a 10-minute walk from the city’s main train station. We came to a cafe to drink coffee, but we were hungry and finally decided to have lunch first. This is a modern boutique café with an excellent atmosphere. It is popular among locals. I ordered pasta Arrabiata and Roman had risotto with Brizola and the two dishes were excellent, served delicately and deliciously. Then we drank coffee that was also high quality. In short, this is a cafe I highly recommend. Map 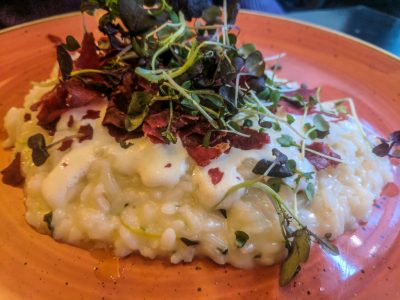 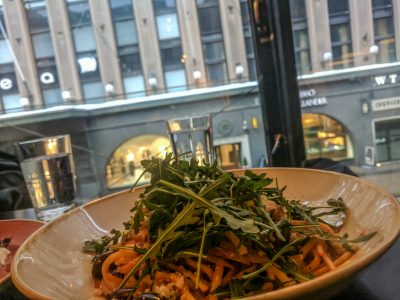 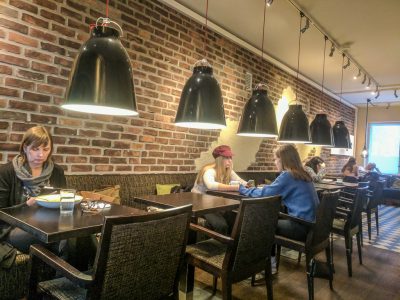 The National Library of Finland

After the café, we decided to go work in the library which turned out to be one of the most beautiful libraries and a good place to work. If you are looking for a place to sit with your laptop and work quietly, then this library is only a few minutes away from the main railway station. You’re given a wi-fi password (Upon showing ID), there are lockers for storing things (because you cannot bring bags, coats and food inside), and I’d say it’s worth visiting there just because it really is a beautiful library. Map 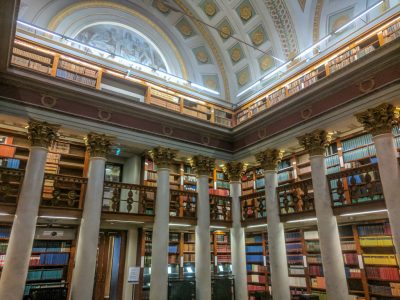 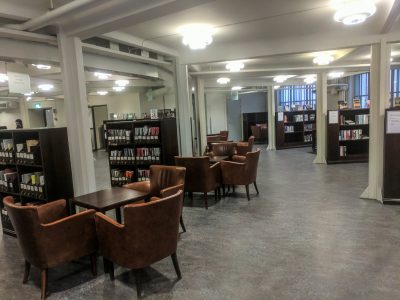 Finland is known as the Queen of Saunas. There are about 5.5 million people in the country and about 3 million saunas!!! Helsinki has many saunas. Since we spent a relatively short time in the city, we did not get to visit any saunas there, but it is something worth trying. There are saunas that have a separation between men and women, and some that don’t, so make sure to check ahead of time. Here’s a link to a post I found detailing the best saunas in town.

The local market is located near the Baltic Sea (Which is frozen during the winter). I recommend going there at sunset (at least in the winter) because it is a very magical place. In the summer, there are also food stalls (They’re closed during the winter). In addition, the entire central area of the city is full of avenues with cafes, restaurants and shops. 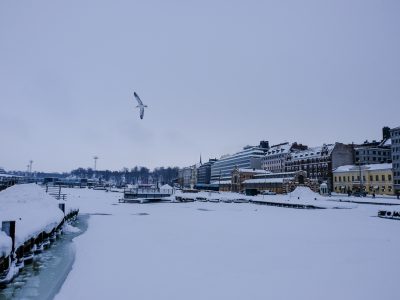 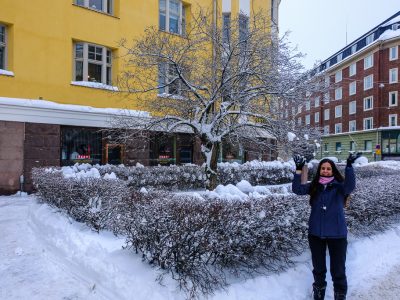 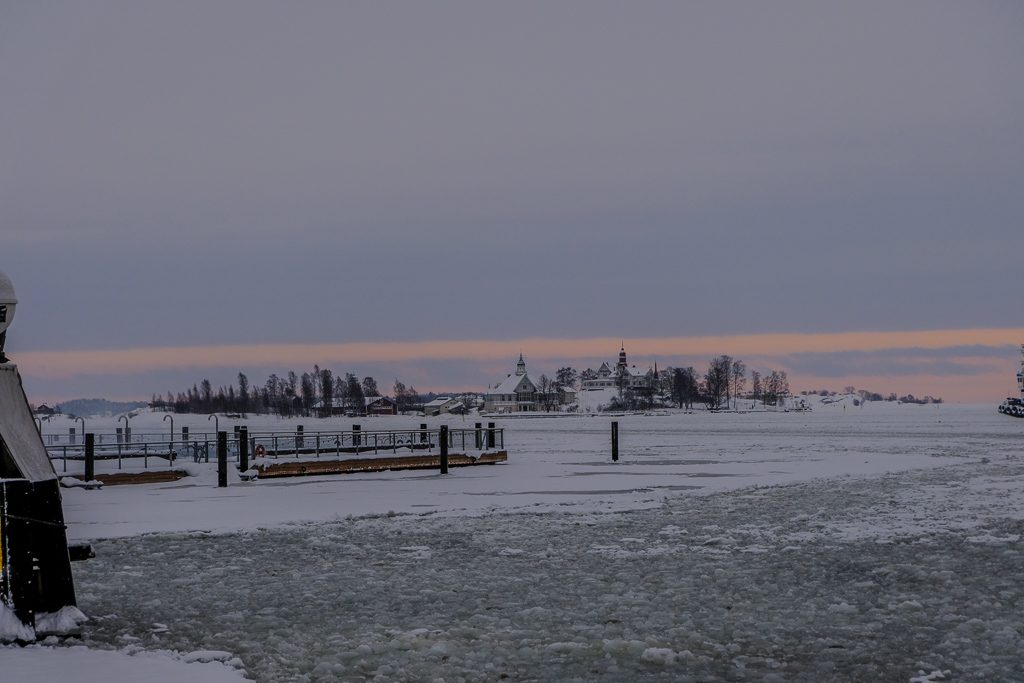 On the last day of our trip, we went there to look for clothes for Roman, since he’s very tall and Finland is known as a country with many tall people, so we were optimistic to find clothes that would fit him, and indeed we were proven right. We found a shop at good prices and sizes for tall men :)) Dressmann Shop, Map. Finland is considered an expensive country, but it was during end of season sales, and there were great prices.