Over the last months, I’ve come across incredible pictures of snowy cabins with a transparent roof in Finland on Instagram, and so as soon as we were able to cooperate with Northern Lights village, we booked a ticket to Finland right away – That’s basically how we’ve decided on a winter trip to Finland.

On top of the village, we were in Helsinki and Rovaniemi, but our experience at the village was definitely a once in a lifetime experience, so let’s start at the beginning…

How to reach the Northern Lights village

We flew to Helsinki (With a stop over at Amsterdam) with the KLM company. We stayed in Helsinki for a day and a half, then took a flight to Ivalo airport, in northern Finland’s Lapland region. As part of the cooperation with the village, we received a two-night package which included a pickup at the airport, as well. Upon landing, two guys were already waiting for us with a sign, and we rode to the village in an organized ride (About a 20-minute drive).

As we arrived at the village, we checked in and received a keycard to our room. We were then driven to our cabin. Our cabin was in the first row, on one hand – further away from the dinning room and the reception (It’s only a 5 minute walk, but at -20 degrees Celsius, every second counts), but on the other hand – I think the first row is great, as there are no cabins in front of you, which allows complete privacy (When the transparent roof isn’t covered by snow, it’s possible to see the inside of the cabin from outside).

Anyhow, we arrived at the cabin with our suitcases and felt like we were in a dream! The cabin is basic in terms of furnishing, but honestly you don’t need much more at a place like this. The roof was covered with snow at first, so we didn’t see what was going on outside, but after melting the snow (Using a special button), a magical, white landscape was revealed to us. 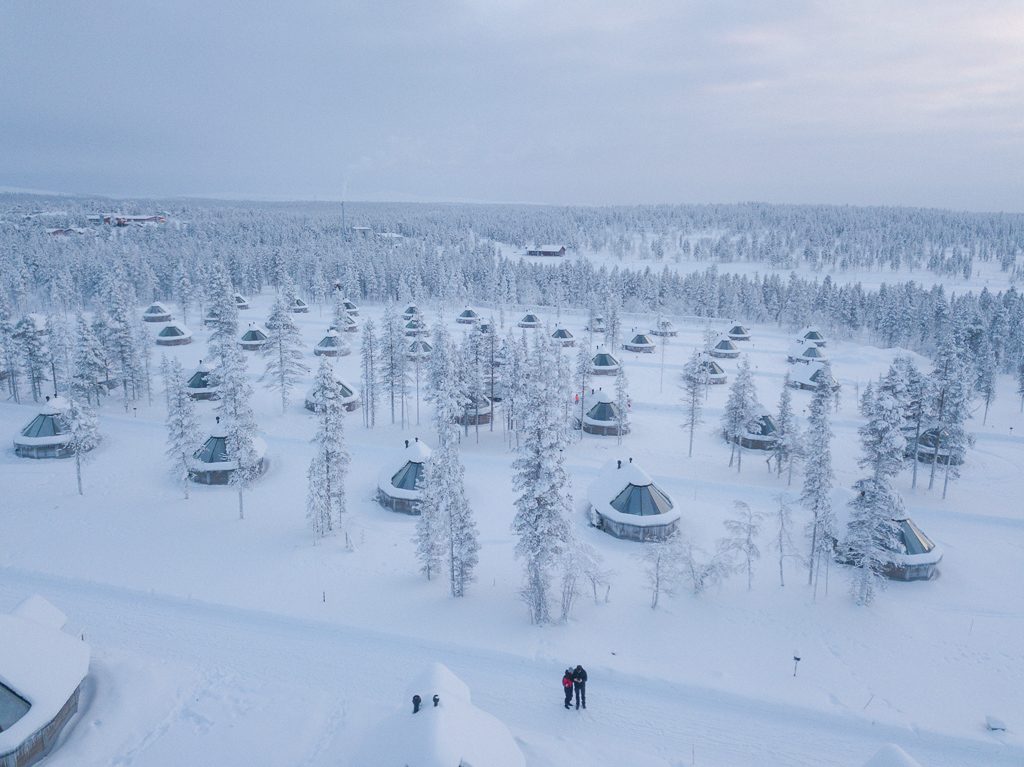 The cabin is heated and very pleasant. Let’s just say that after putting on all your hot clothes, before leaving the cabin, you feel like you’re about to faint. The cabin has a twin bed, two dressers with drawers for equipment, a kettle with cups and a bathroom (The hot water lasts for 10 minutes, then you have to wait for them to heat up again, so don’t plan on any long showers). Otherwise, the feeling you get, seeing the snowy trees and the bright sky while laying on the bed is hard to put into words. 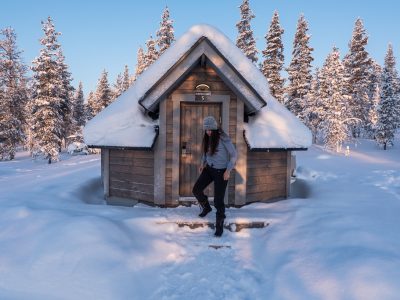 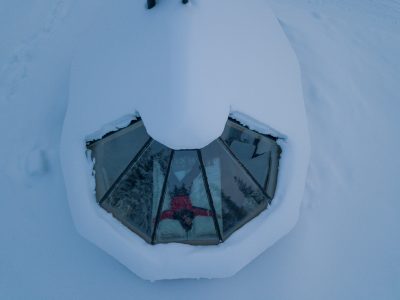 Things to do in the cabin area

So, beyond the fact that the experience of sleeping in the cabin is an attraction in and of itself, the Northern Lights cabins offer a variety of winter attractions such as snowmobiles, sledding with husky dogs, sledding with reindeer, ice fishing, hot saunas and if you’re lucky (as we were) you get to watch the northern lights!!

The two-night package includes a 25-minute sledding experience with reindeers and two hours of sledding with huskies.

On the first night we did not get to see it (We got a clock from the reception for € 10. The clock rings if the northern glow appears, as it might happen in the middle of the night). On the second evening we went to the dining room for dinner and suddenly it was in front of us. We were ecstatic and despite the cold I took off the gloves, brought the tripod, connected it to the camera and we began filming with great enthusiasm.

Note: You cannot take pictures of the northern glow on a cell phone (It’s possible with certain apps, but the quality wasn’t great). It is necessary to use a good camera on a tripod and take a long exposure picture. Luckily, we had the right equipment to create images that showed the glow as even brighter than it was (in reality the green is less glamorous than what the pictures show, but you can certainly see it, especially if the sky is clear without any clouds.) One of the employees told us we were lucky and saw the clearest glow they had during that season).

Even without the northern glow, our stay at the cabins was amazing, but it was certainly the cherry on top that made the experience something we will remember for life. 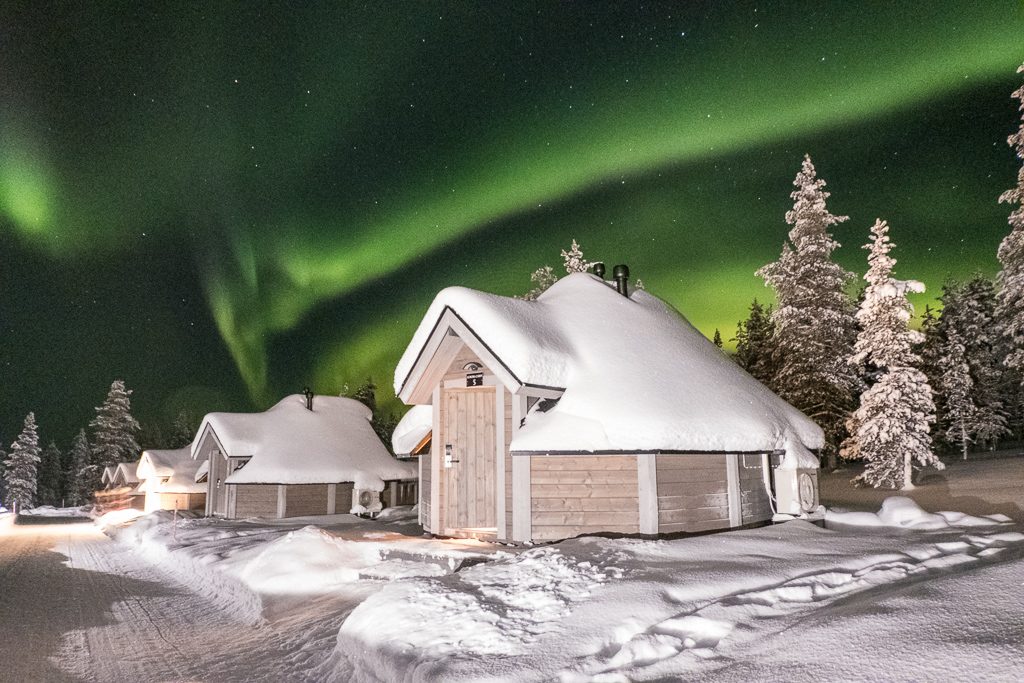 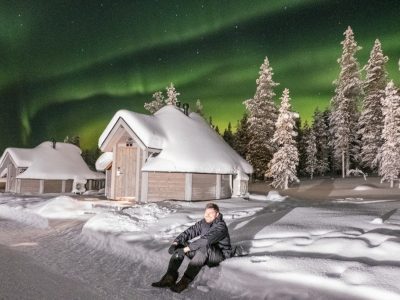 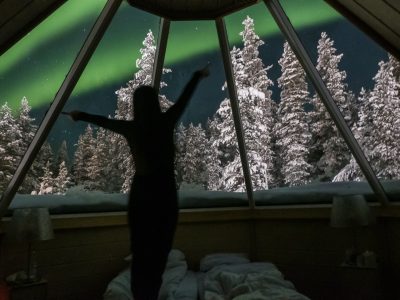 The reception has a screen where you can see all the attractions there are every day, which also indicates how many people are listed for each attraction. You need to arrive a quarter hour early for every attraction and wait for pickup at the reception desk (except for the husky dog experience for which you need to arrive half an hour in advance). It turns out the two of us were the only one to sign up for this attraction that day. We waited at reception and a nice man came and took us to the sleds with the reindeer. According to him, the speed of the reindeer can reach 55 miles per hour, but they carried us at a brisk walk, so this attraction is suitable for any age.

The ride was calm and cold, so I recommend bringing really hot clothes when you go to such attractions because sitting without doing something active causes the body to cool more quickly and there is also some wind while riding. The reindeer were so cute, and we patted and fed them. We felt just like Santa Claus, like we were in a fairy tale. 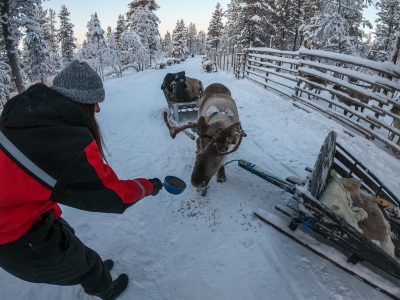 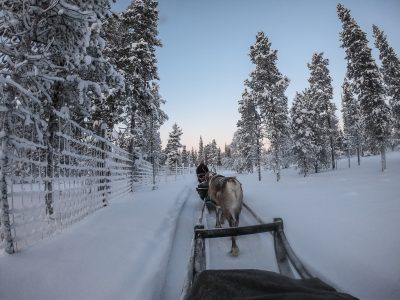 The place where the Husky dogs are located is relatively far from the cabins and we drove there in about 20 minutes. We were with another, Australian couple. When we got to the dog farm, they ran straight to us and jumped on us and were really cute. We and the other couple split into two sleds. In our sled, I sat while Roman stood in the back as the driver and in the second sled the couple both sat.

Halfway down we changed sleds so that they could drive the sled too. I personally did not want to drive, because I was too cold but in retrospect it may be better to stand up and do some activity to warm up and not just sit down. While riding, I was covered by snow, including even my eyelashes, and it was really cold. My recommendation is to come extra dressed for this attraction because the Husky dogs run faster than the reindeer and there is wind and it is also in an open area.

This is a crazy experience with a landscape that seems to be taken from a movie scene and I really recommend doing it. After about an hour of riding, we went back to the farm, and then our guide lit a fire to warm us up and the employees brought us cookies and hot juice. It took me a while to thaw, but the fire definitely helped, and it was a really cool adventure. 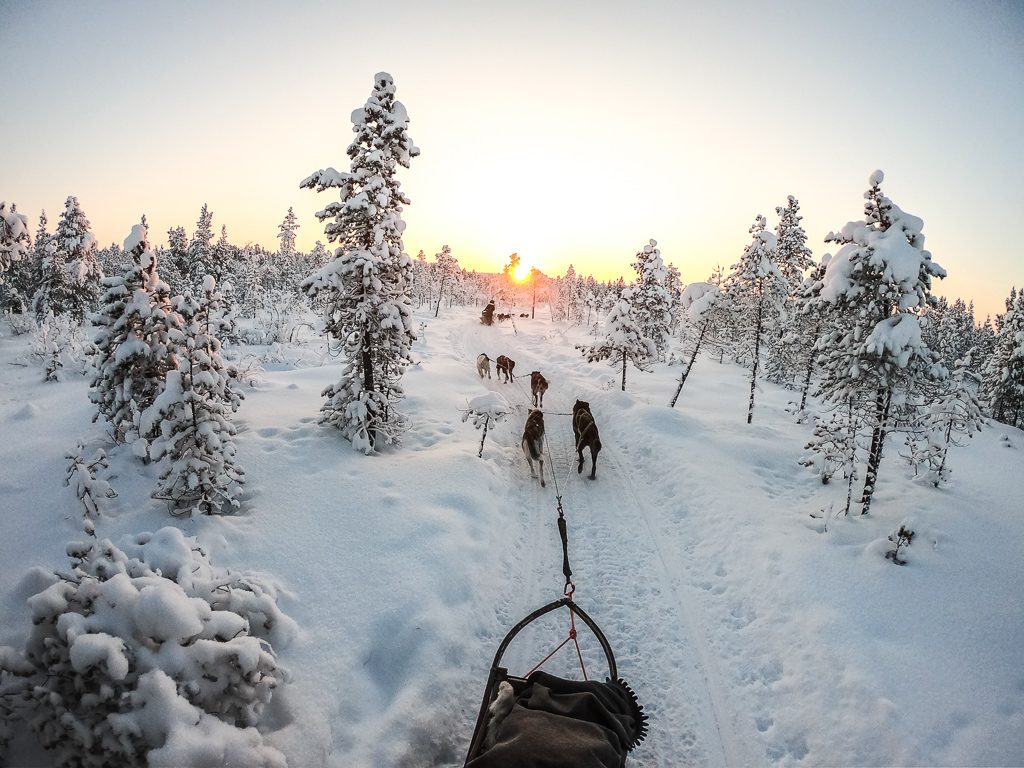 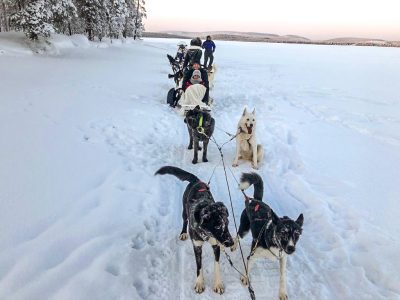 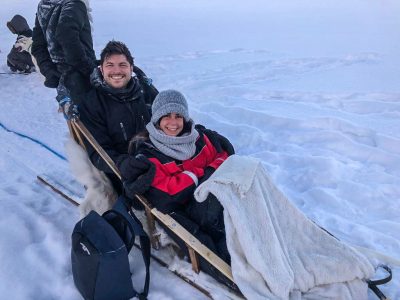 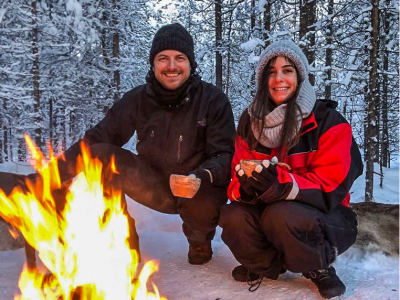 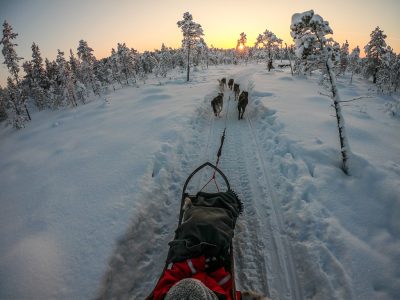 There is a dry sauna in the cabin compound and a pool of frozen water outside. Roman somehow collected the courage to go into the icy water after the sauna. I did not dare to do so for fear of dying 🙂 There is a dressing room near the saunas. Entrance to the sauna is at an additional cost (around EUR 10 per person) and there is also the possibility of renting the complex for an hour at a fee of EUR 100. 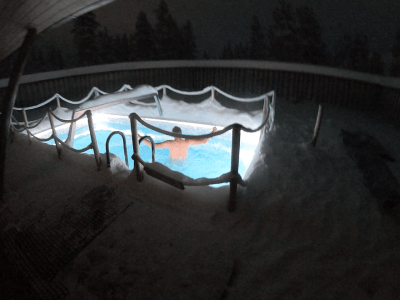 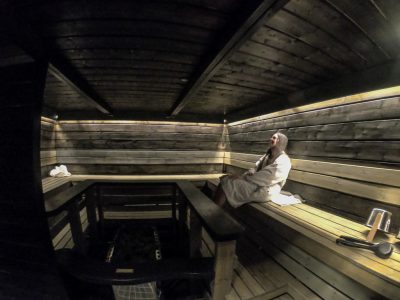 The two-night package also included full pension. That means that pretty much all day, there is free food, since each meal lasts for a few hours. The meals are served in the form of a buffet and each time there was a different and varied menu and it was really tasty, as well. This is not a chef’s restaurant and the variety isn’t incredible, but I personally prefer a limited variety good food that’s not too greasy, and that’s exactly what there was. In the morning there is a stand for making Belgian waffles, there are vegetables, fruits, yogurts, eggs, sausages, breads, and of course salmon, cheeses, cookies and desserts.

At noon and in the evening, there were two soups each time and alternating dishes such as venison, risotto, fish, stir-fried noodles and more.

There is always a coffee and tea stand and there is also a bar where you can buy alcohol and good coffee, such as a cappuccino or espresso.
In addition, the area itself is very large and there are tables with chairs, as well as seating areas facing a fireplace, where we sat for hours with coffee and wine and it was simply a treat. 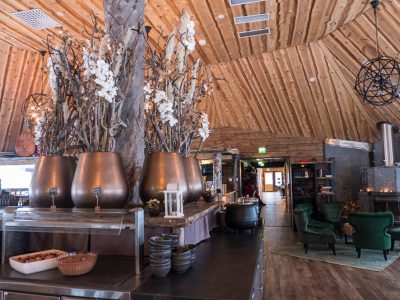 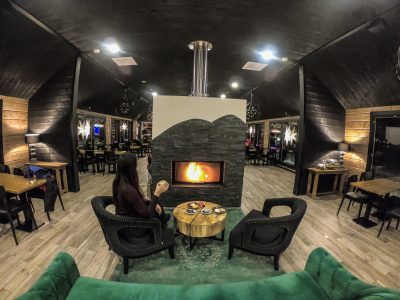 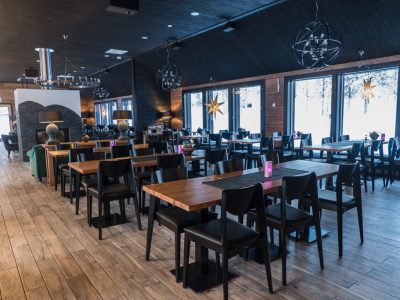 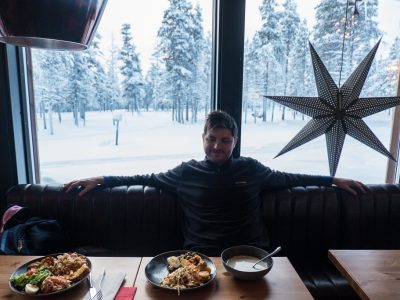 What clothes to bring to the cabins in the winter

Our trip took place in late January – early February and in the cabin area the temperature was around -20 degrees. Basically, you do not have to bring too much hot equipment to the cabins themselves, because you can get massive overalls there that are suitable for winter, boots and I think even gloves. But since we arrived as part of a trip to a number of other places besides the village, we came prepared with good boots, thermal shirts and pants, gloves (thin ones for mobile use and thick gloves), a neck warmer, scarf, wool hat and thermal socks. In addition, my tip is to bring heating bags because it really helps. I did wear the overall as well, because I needed another layer, but Roman, for example, did not use the equipment they offered on location.

At the food compound there is also an ice bar that we personally did not get to visit, because I felt I was cold enough. The area of ​​the cabins is quite isolated but if you want a supermarket or other restaurants, you’ll find them about 15 minutes away by foot (We haven’t gone there).

Accommodation in the cabins is not cheap but I think it’s something that gives you value for money (the package for the dates we were there on was 1500 euros for two nights for a couple,

Including transfers from the airport, full pension, sledding with deer and husky dogs). You can also book accommodation without a package, they sometimes have specials like booking 2 nights + one free night. It’s worth checking what’s more worthwhile – a package deal or a separate booking.

The cabins are new and cozy, and the whole complex of cabins is nicely decorated and of a high standard. This is not a five-star resort but rather a place that gives you an experience you will have anywhere else.