There are endless restaurants and food carts in the streets of Tel-Aviv, but if you’re looking for food of all sorts of cultures you might want to make a trip downtown.
In the area of the Tel-Aviv Central Bus Station (located right off Levinsky street), and also in the station itself, you will find delicious street food that is also cheap, and a culinary experience you won’t find anywhere else.

Eating at a central bus station doesn’t sound like the most exciting culinary experience, but once you actually go you’ll find a whole world of good and cheap Filipino food. 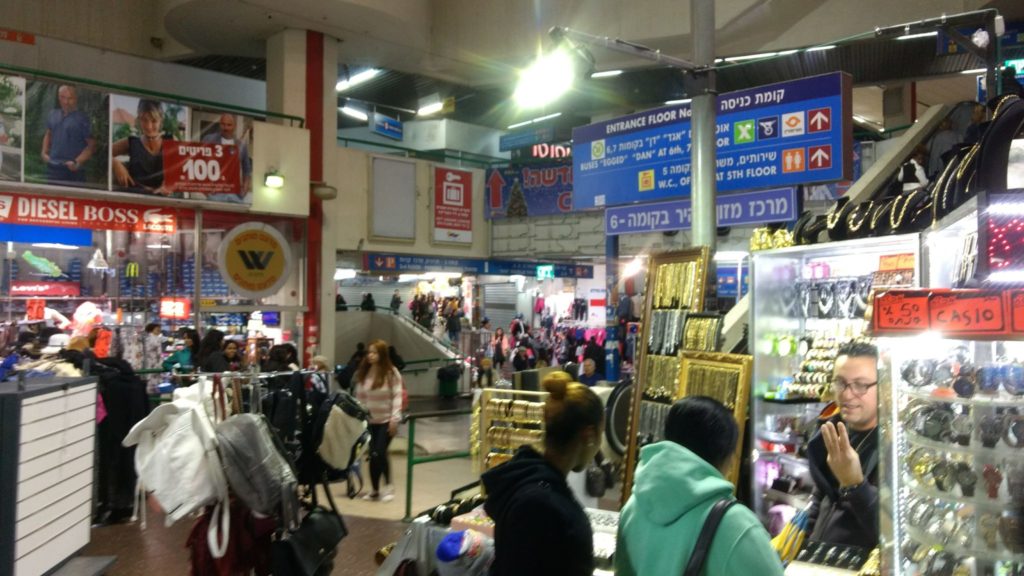 This restaurant offers soups, bao, smoothies, and frozen groceries.
The best part about this place is the soup.
They have 3 different types of soups:

The price is as cheap as 15 NIS for each soup! 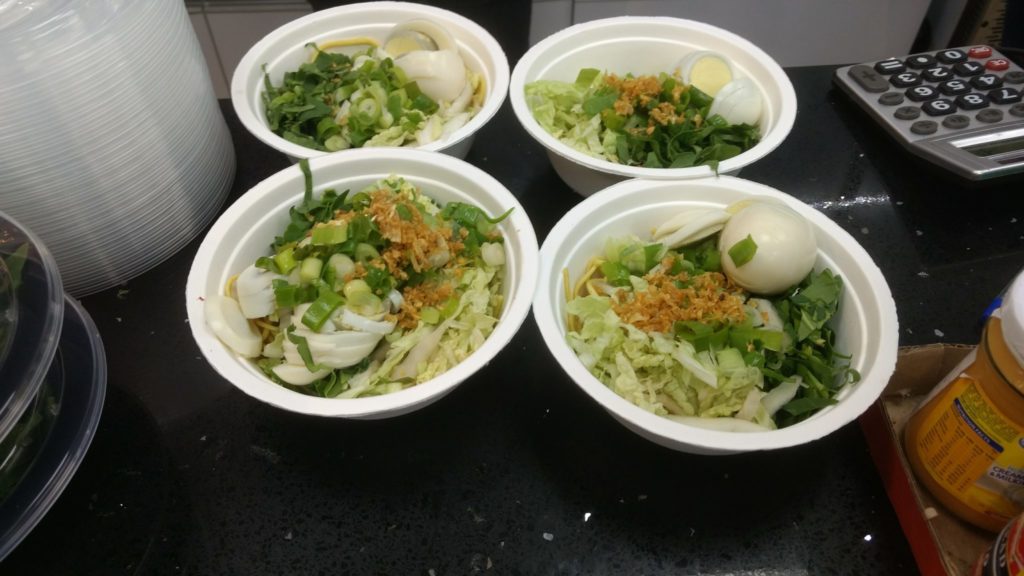 You will also find bao for 10 NIS that come with either beef, ham, or veggies. 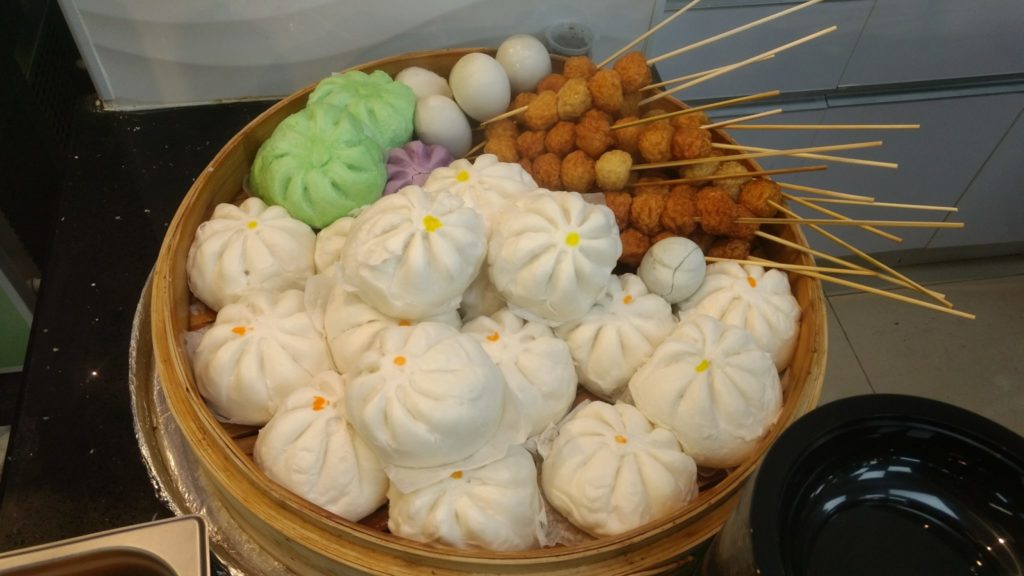 The smoothies are also cheap. You can get a small size for 10 NIS and a large for 15 NIS.
All the soups smelled and looked so good. Our pick was the slowly cooked beef soup.

To be honest, I was a little worried that the soup will be too thick and fatty, but it was so flavorful and super delicious. It was really filling, and so cheap, that I would definitely go back to eat it again.You can either sit there or take it to go. We chose to eat at the place, and it was really nice and clean.

Right across from the food restaurant there are a few dessert stands as well as other types of foods. We had to try something else, and so we decided to try out the stand closest to the market.

We tried beef shish kebabs, which were well-seasoned and super delicious, and the best part is that it only cost 5 NIS! We also took home a dish with beef that was 15 NIS. According to my husband Roman, the beef was overall good but it wasn’t perfect.
Opening hours are Friday and Saturday only from the morning until the night. 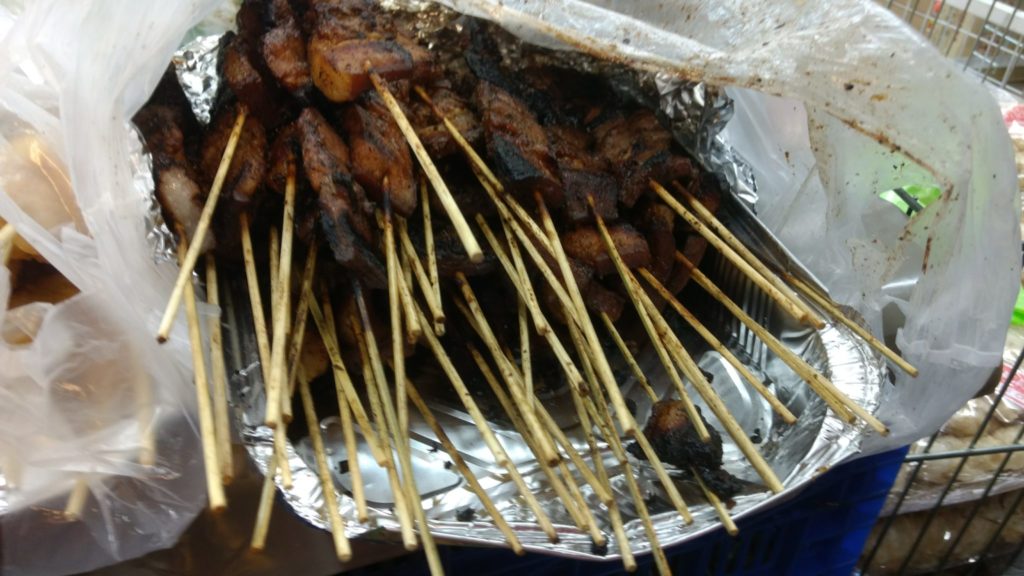 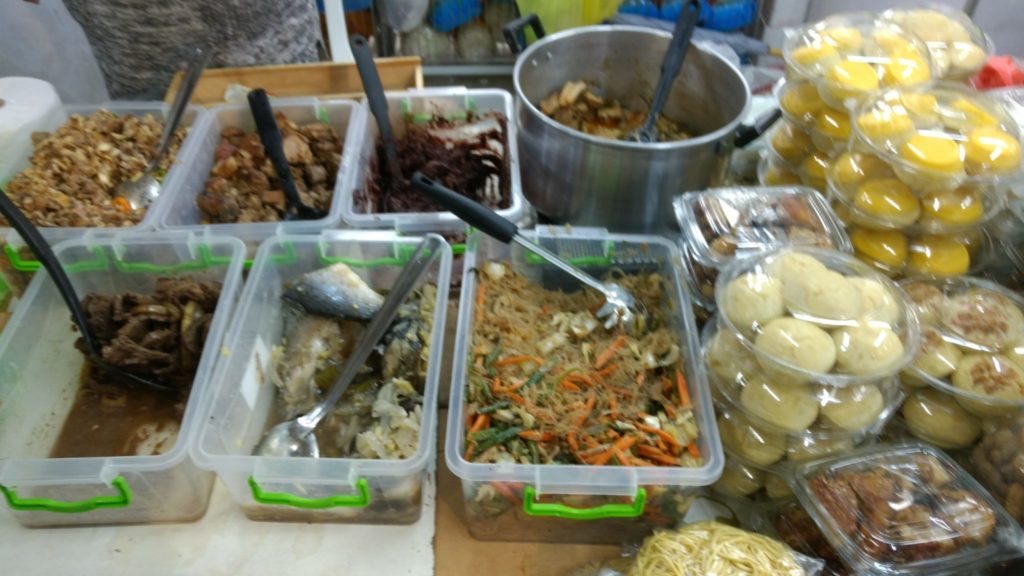 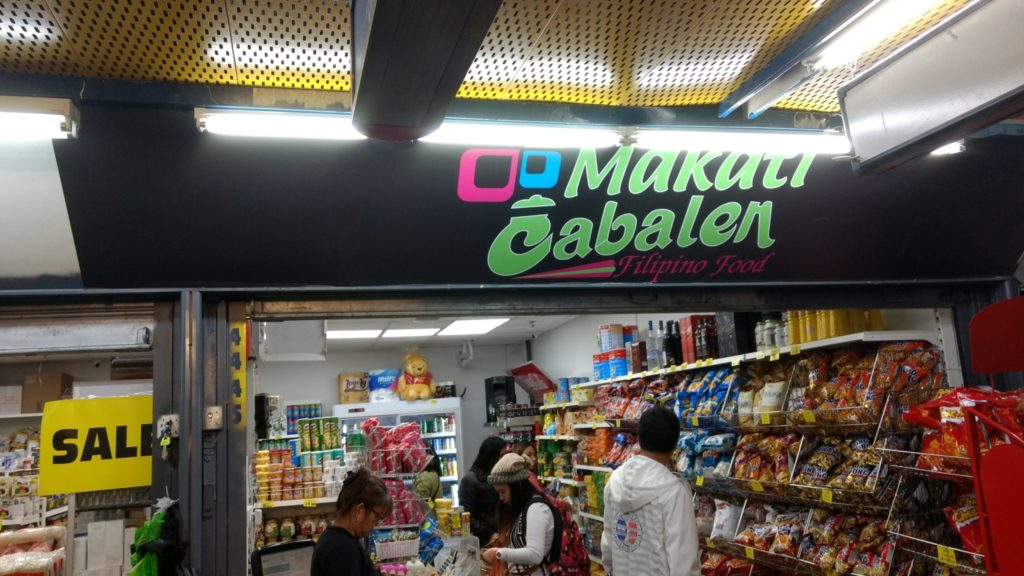 All the stands have a big variety of desserts. We especially loved the sweet desserts that are made out of sticky rice, sweet potato, and especially the casava. There were so many more to try! Last time we were there we ate dessert in different flavours. It was just the right amount of sweet, so it wasn’t heavy. Makes the perfect dessert along with a great cup of coffee.

In the different stands you’ll be able to find all sorts of foods that you can also wrap to-go for as cheap as 15 NIS. We once tried a beans dish, which was good, but it left a bitter after-taste that I didn’t really like. Who knows, maybe it was a one time thing, and so I should definitely try it again.

Change store with Filipino food inside

If you go a little further away from the stands, on the left side of the soup restaurant you will find a change spot that also sells bao, all sorts of dishes, and a dessert with banana and seasoned peanuts.

Thailand is known for their banana desserts, and during our last visit we tried some of them, fell in love, and so we decided to try the banana-peanut dessert that the change spot had to offer. One serving is as cheap as 4 NIS and it tasted fantastic.

We also decided to buy a seasoned peanut bag for 10 NIS. When we first tried them, we associated the flavour with that of the seasoned cashew we used to eat in Vietnam and Thailand. The peanuts were really well-seasoned, and would make for a perfect snack while drinking beer. 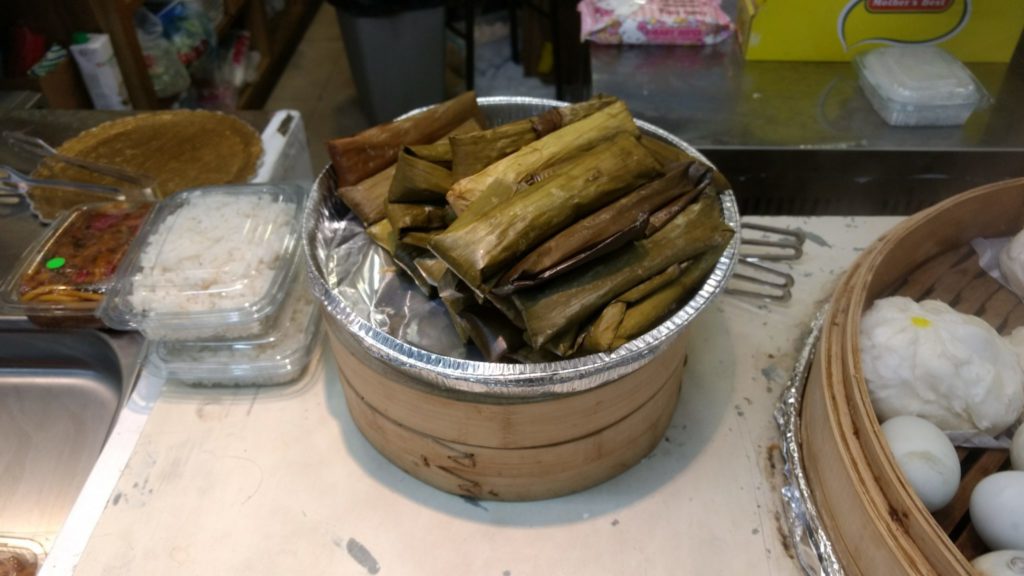 Directions to the Food court at the central bus station

Basically, you can get to the food court from every entrance at the central bus station.
The easiest way is through the main entrance on Levinsky street.

So next time you want to try some authentic food that comes cheap, I highly recommend exploring the central bus station. I know that a lot of you choose not to go there often, but I promise you’ll have an experience you won’t find anywhere else in Israel, with extremely delicious food. 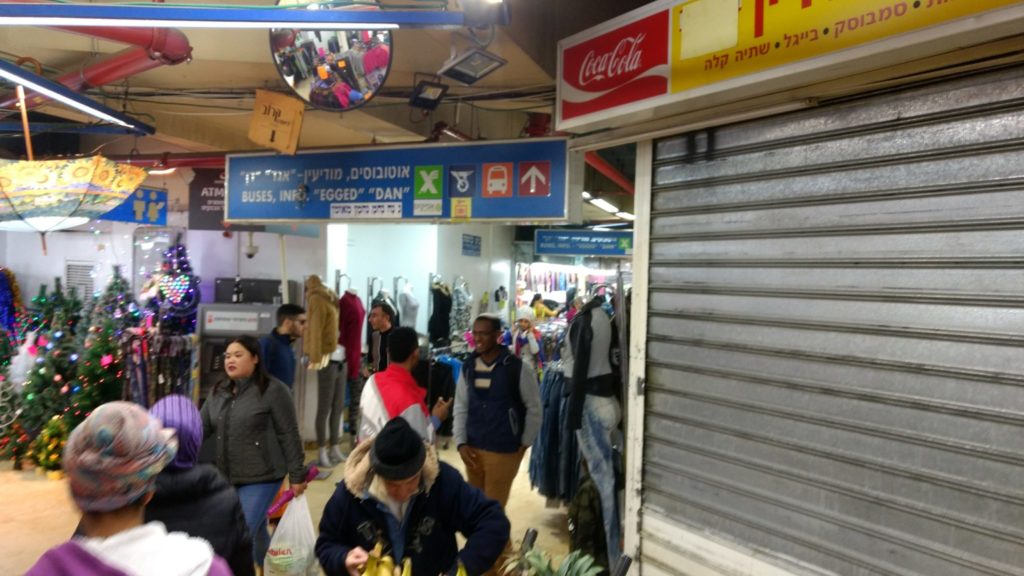 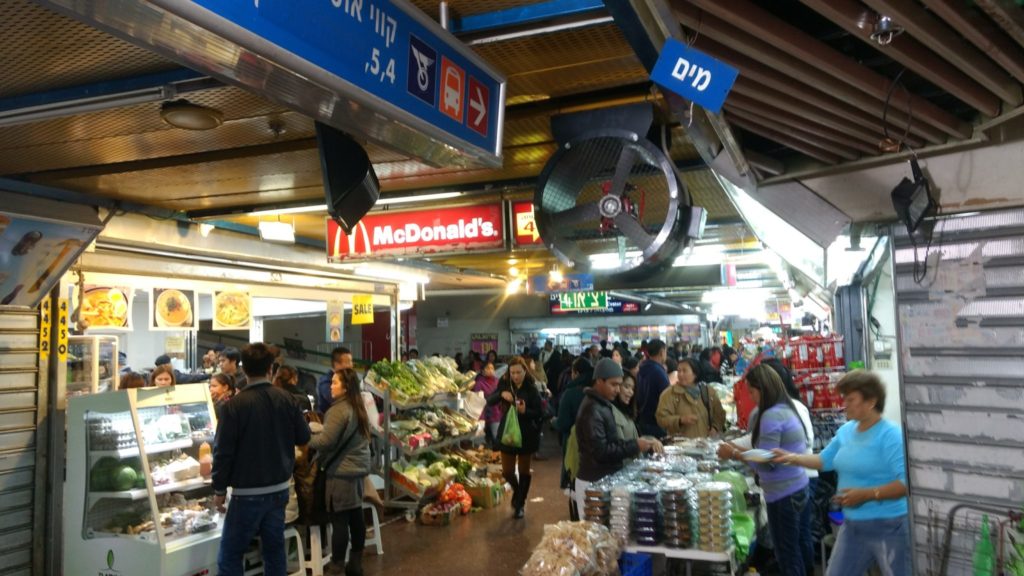 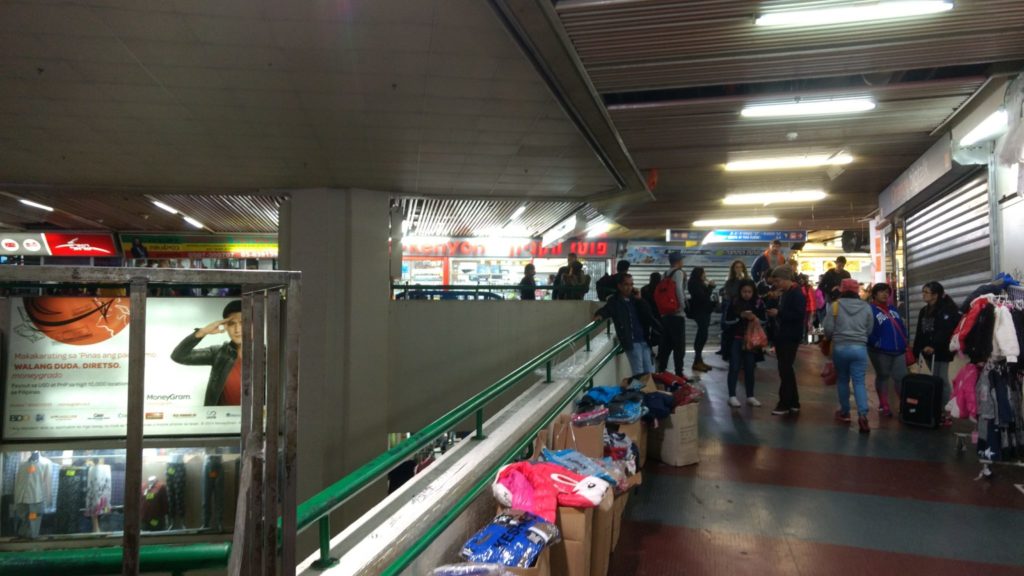 If you ever craved incredible Chinese food such as bao with beef, noodles, great dumplings and much more, I suggest you pay a visit to 26 Neve Sha’anan street to satisfy those cravings.

They have the best bao I have ever had. We’re talking large buns and the dough-to-meat ratio is pure perfection. The bao in filled with a juicy meatball that is perfectly sauced. You can also have a side of hot sauce that if you ask me always upgrades anything.
Each bao is 10 NIS. 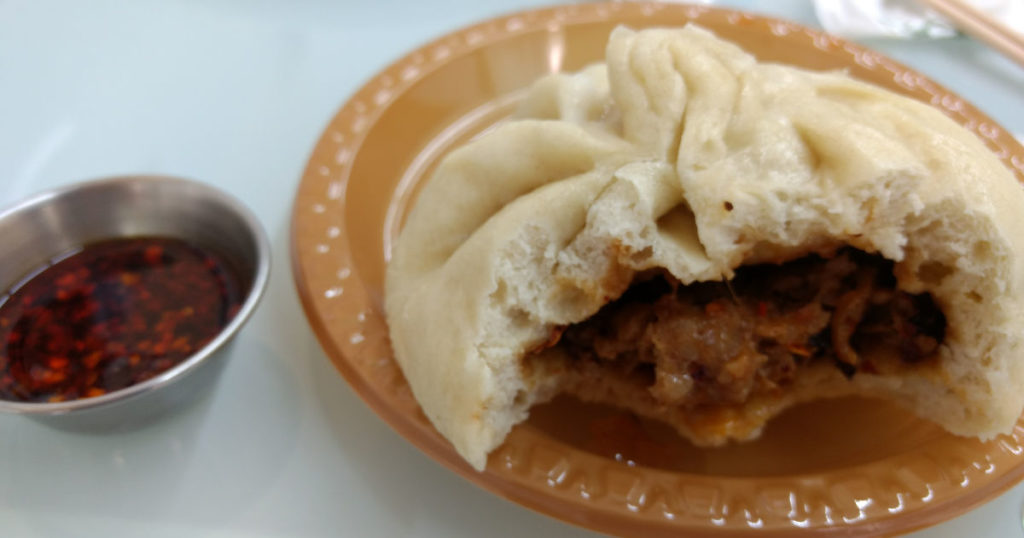 You can choose dumplings with different fillings such as chicken, pork, or vegetarian, and the portion you get is great for the price you pay.
The dumplings are 25 NIS.

The noodles come with meat/calamari/vegetarian and it’s super delicious.
The noodles are 30 NIS but with the calamari it’s 37 NIS. 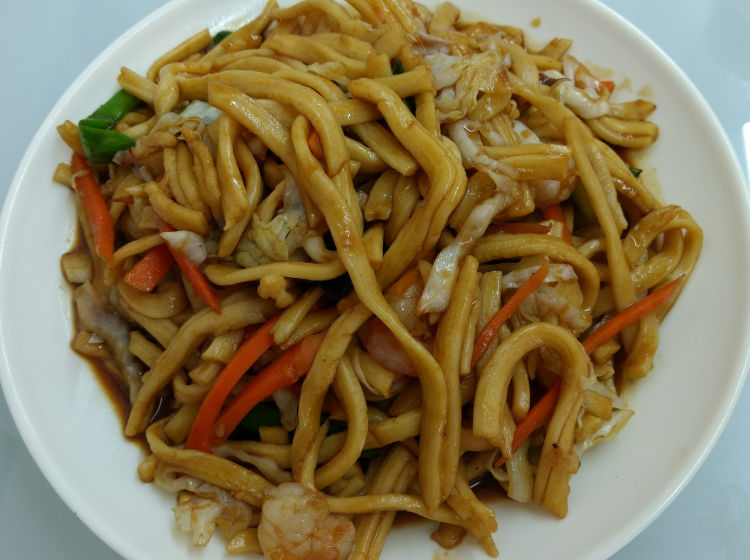 On the menu you will also find soups, egg rolls, duck, and more. The prices are overall cheap, but the duck is a bit more expensive.

The restaurant has been under construction recently so it’s super nice and clean to sit down and enjoy your meal. The employees are really nice, and if you’re not too hungry you could choose to have a beer with some peanuts.
The restaurant is open everyday from the morning and until the evening.