One part of traveling that’s important to me is tasty food 🙂 Sometimes Roman and I even choose our destination based on the cuisine. While the decision to fly to London wasn’t due to the food, it was an additional layer that attracted us to it.
London is known for high class restaurants and markets with excellent street food.
So, once the decision to travel to London was made, I decided to search for a local food tour for us, as well.

We go on food tours at most of the destinations we visit, as it’s a great way to get to know the place better, and is also always delicious 🙂
After some internet research, I’ve found the Secret food tours company. It’s actually a very large company and they have food tours at many different destinations around the globe. I’ve read some good reviews about them and decided it was a good chance to try one of their tours.
We chose the London bridge food tour (Link to tour).

We arrived at the tour’s meeting point, where we met our guide, Lucy, and discovered we were a group of 12 people! This is undoubtedly the largest group I’ve been a part of on a food tour.

We waited for all of the participants to arrive, as Lucy told us a bit about the tour and asked if any of us were allergic or food intolerant.
There was a vegetarian couple on the tour (Vegetarians will have an easy time enjoying this tour, but vegans may find it a bit more challenging as many of the dishes contained cheese).

Once the whole group had gathered, we walked to our first stop at Borough market.
This is one of London’s famous markets and has a ton of street food stalls, as well as cheese, meat, olive and spice stalls, among others. There’s honestly such a wide variety there that it’s hard to decide what to have. Luckily, being on the tour, we didn’t have to make that choice 🙂

At the first stop we had a bun with a fried egg and bacon. It’s simple food, but the bun was really tasty, and it’s considered a good place for a quick breakfast.
We then continued to another place where Lucy told us it’s a highly successful bread stall, offering a cheese stick with olives that’s considered excellent. In front of this stall is a famous donut stall which, according to Lucy, has the best donuts. 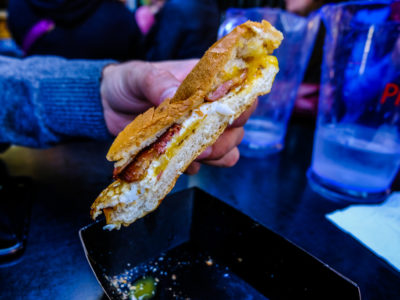 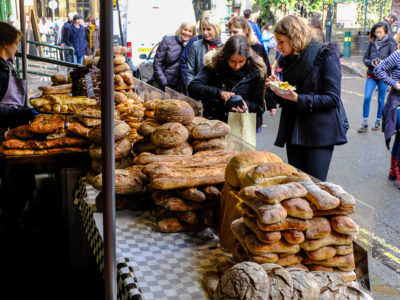 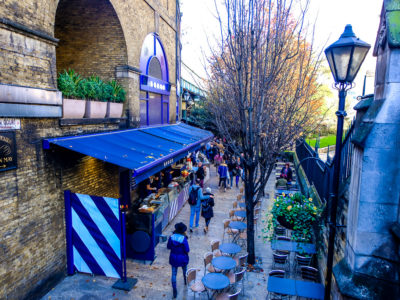 We then went on a 20-minute break, during which we could explore the market on our own. I truly enjoyed the idea of free time at the market, as I wasn’t sure whether we would get to revisit it on the following days of our trip and felt like exploring and checking it out a bit.
Since we knew there were plenty of tastings coming up on the tour, we didn’t want to buy anything to eat, and opted for hot cider.

After the break we had Fish & chips at a prize-winning stall, and they were truly delicious (Haddock in a beer batter and triple cooked chips). The place doesn’t exactly have seating, but at some point, a bench opened up and we managed to cram a few people onto it. 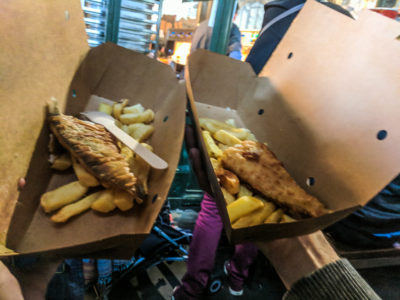 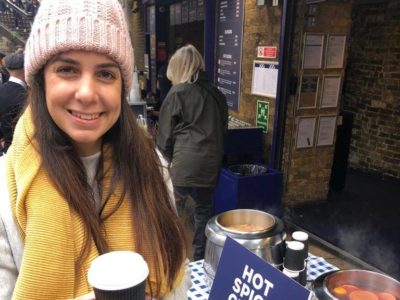 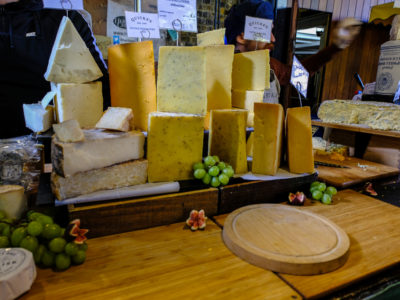 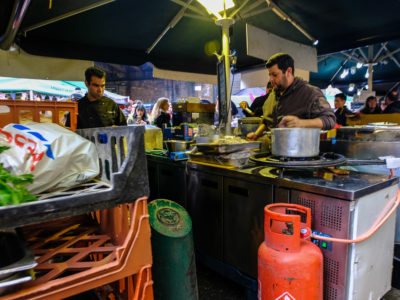 From there we went to the other side of the market where there are many cheese, ham, olive, spice, and alcohol stalls, to name a few. We received free time there as well, to explore the area, then tasted a local dish of sausage wrapped in pastry (The original sausage roll courtesy of the ginger pig).

Stopping for different tastings in town

From the market we moved on to a short stop by Winchester palace. Lucy poured us some fermented honey wine. I quite liked the drink, but Roman wasn’t sure about it 🙂

Then we went to a restaurant where we tried two types of apple cider. The first was really good, but the other really wasn’t. It’s honestly a matter of taste, but I wasn’t feeling it. We also received several different types of cheese, which is always wonderful, and got to sit at a table with a couple who immigrated to London from the USA and were nice to chat with. 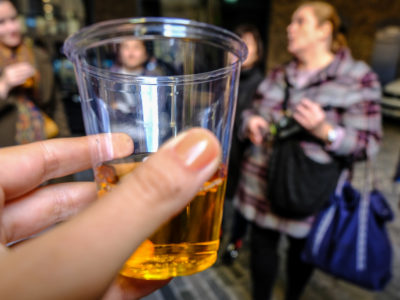 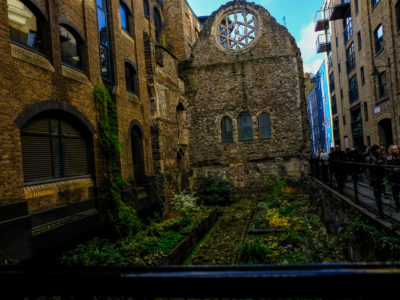 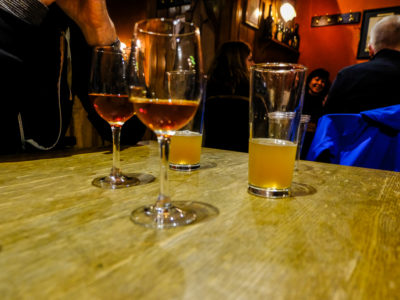 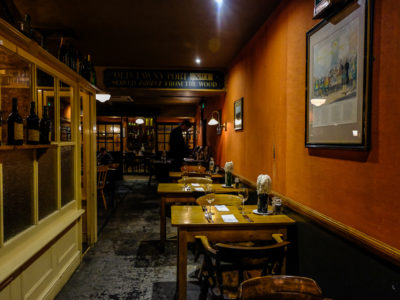 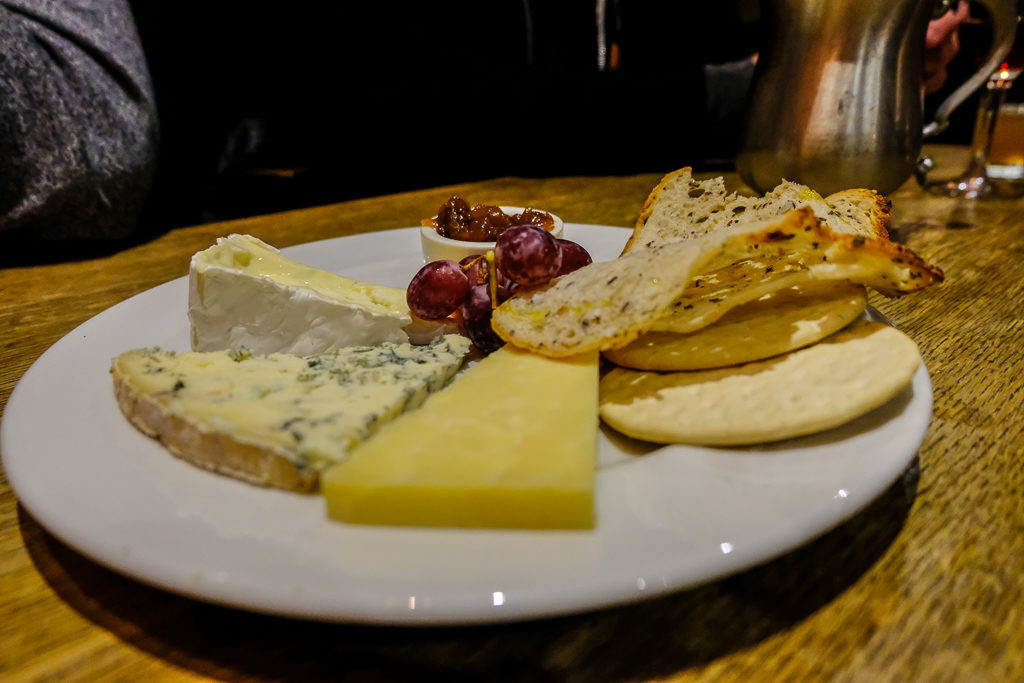 Of course, by then, we were full – but you can’t finish a tour without dessert

Consider yourself warned, this dessert is addictive and if you try it you may never want to stop eating it 🙂 It’s a cake called Sticky toffee pudding, made of dates and layered over the most delicious caramel sauce with vanilla ice-cream. I really like caramel, so of course I’ve fallen in love with this cake, fortunately I was full, and my body refused to have more than a few bites.
We were also served English tea which helped some with the cake’s sweetness.

We then continued to one of the prettiest places in town. A vantage point overlooking Tower Bridge, with gorgeous blue skies which meant we could take some beautiful photos. Lucy brought us a final surprise – one of the donuts from the market which she claimed were the best. I’m not a huge donut fan, but I did use it as a prop for taking pictures in front of the bridge 🙂 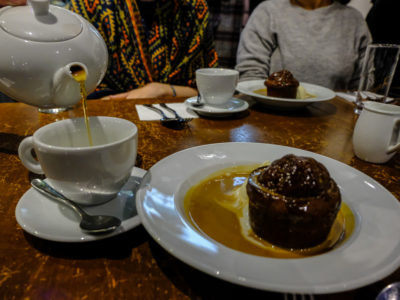 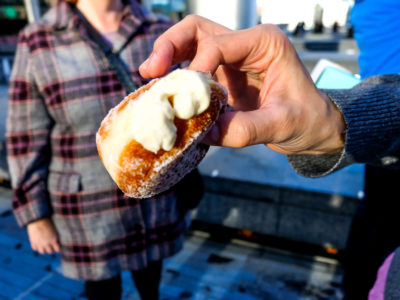 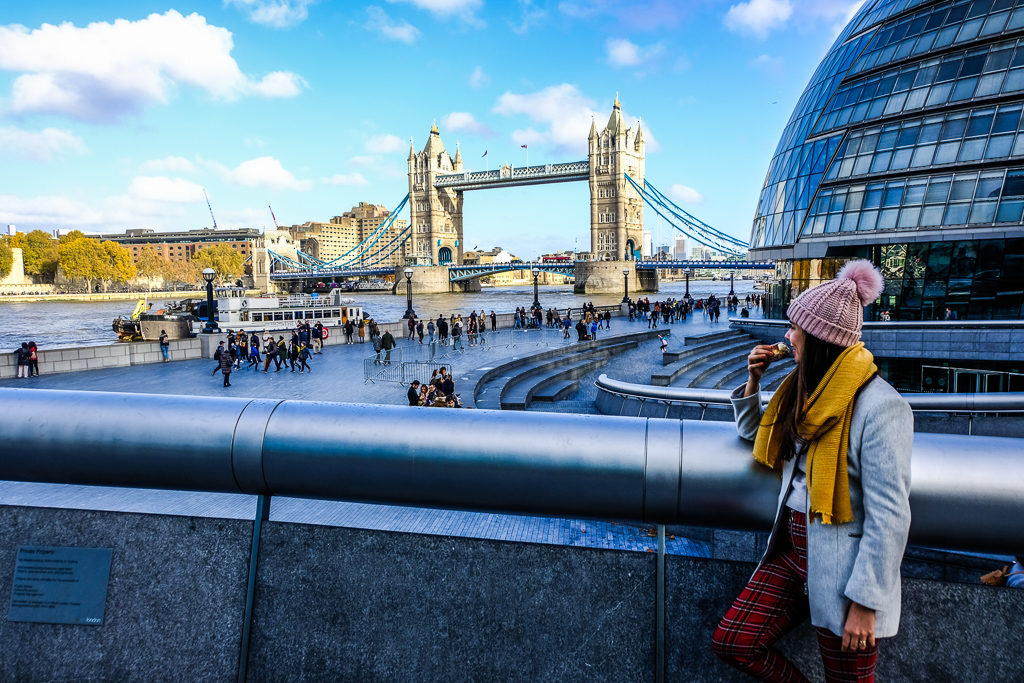 Notes about the food tour

The tour lasted nearly three and a half hours. It was light and delicious. As we only had four days to our trip, this was a great way to try local food, and since there’s such a large selection of restaurants and markets in London – It’s good to have something organized to allow us to tr many good foods. The tour also included historic information, but we mostly discussed the food and Lucy gave us some good local tips, too. For example, she explained about places we passed along the way and recommended which ones are worth visiting later. I think this tour can fit anybody, it contains relatively little walking, lots of tasty food and a charming guide.