Before arriving in Barcelona, it was clear to me that one of the attractions we had to do over there is a food tour. Barcelona is known for its tapas and wine scene and I felt like trying out as much of what Barcelona has to offer as possible. I looked for a food tour which included wine and had a local tour guide and came across the tour with Adrian in the “experiences” section on the Airbnb website (Link to the tour). It received great reviews and I ended up mailing a request for us to join the tour straight away.

Adrian replied to me and was very pleasant, so on Saturday, at 5pm (Early September) we joined the food tour. Adrian had a ton of energy and stories and I immediately knew it was going to be an interesting tour, and hopefully a tasty one. In retrospect, it was even better than I had anticipated.

Stops along the tour

We started the tour at the meeting point by the metro station. The group consisted of Roman and I and six other guys. Three guys from South Africa, a girl from the Netherlands and a couple from the USA. The first place we visited was a local bar. There’s no chance of you seeing a tourist there, there isn’t even a sign with the place’s name. Only the locals know it.

We got sparkling wine, Manchego cheese, Jamon (ham) and spicy sausage. Simple food, yet really delicious, especially for cheese and ham enthusiasts. Afterwards, we got a glass of Cava. Adrian told us about the food and drinks and the difference between sparkling wine and Cava. After the first stop I already felt a bit tipsy. Oh, and it’s also possible to purchase wines and other local produce. 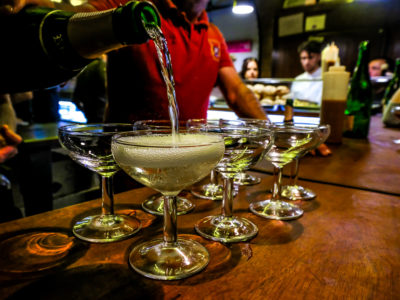 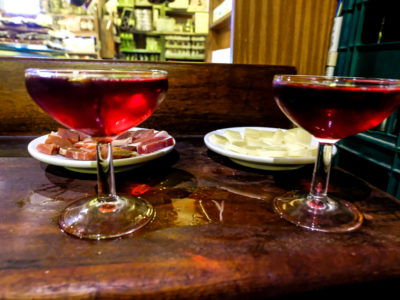 We moved on to the next stop, a place that serves the best Potatos Batats (a very popular potato dish you’ll find in every restaurant). Adrian said it’s the recommended spot to have this dish. We also tried a tapas named Bomba which was spicy and delicious and for dessert we had bread with tomato tapas. There’s a whole ritual that goes into preparing the dish, which is simple and super tasty. At this stop we had a light beer mixed with lime soda (a fun, refreshing drink). 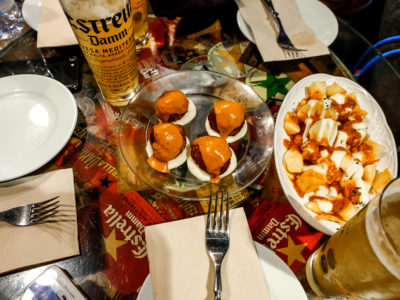 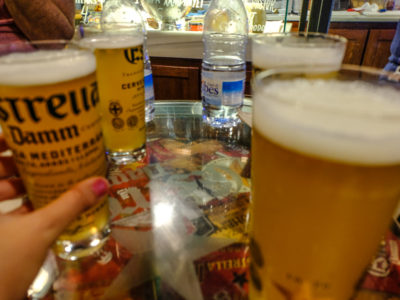 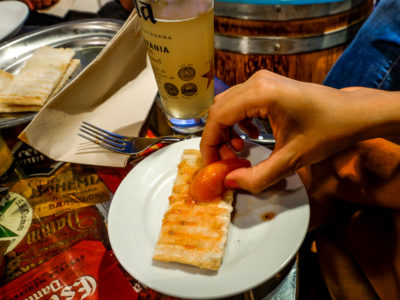 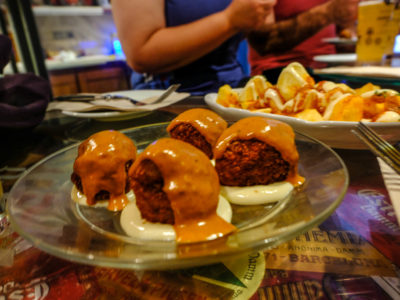 The next stop was at a lovely bar where they served us excellent olives, Chorizo and ratatouille (roasted vegetables) tapas on toast. We drank such delicious wine there, that by the end we decided to buy a bottle of it to take back to Israel with us. 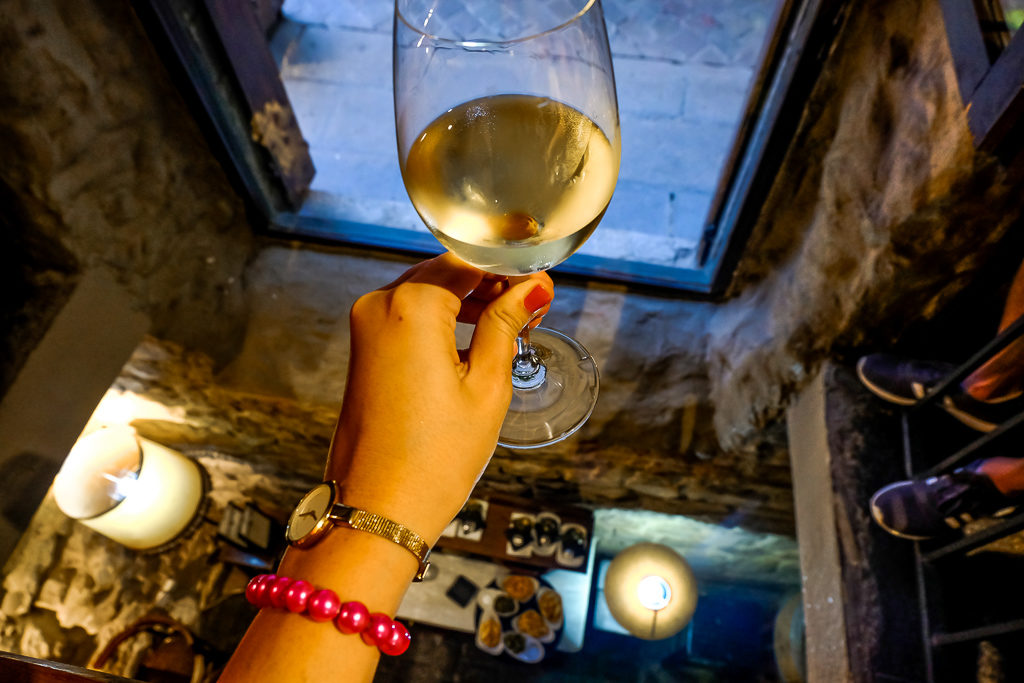 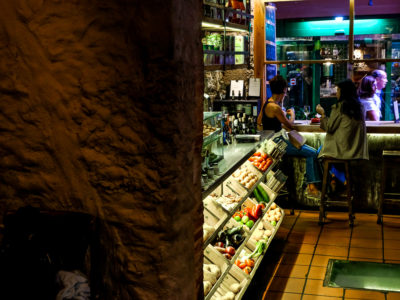 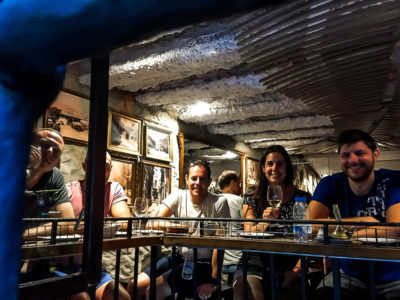 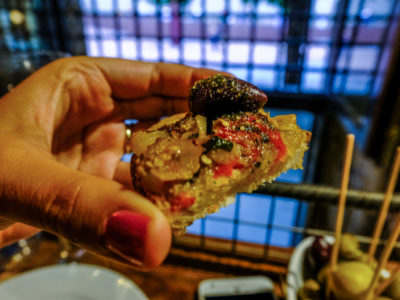 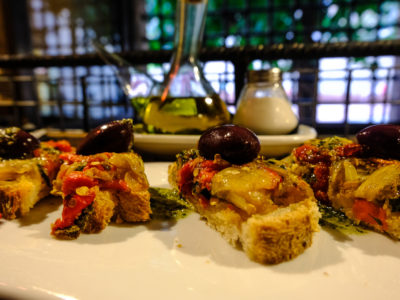 The last stop was a restaurant-bar where we drank wine (Rosé) in the traditional manner (It didn’t sit well with me haha) and ate tomato salad with onions, friend anchovies (I was surprised to discover how tasty they are) and killer sausages (At this point I was stuffed and drunk and didn’t try them, Roman claimed they were excellent as well) 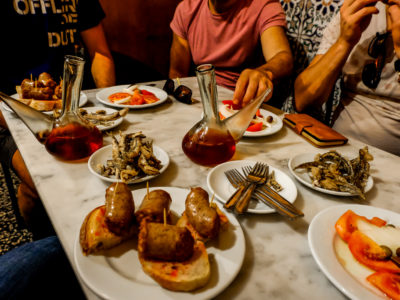 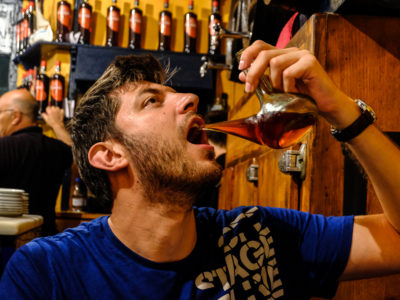 Experiences on the tour

During the tour, Adrian told us a lot about Barcelona’s history, I was surprised by how knowledgeable he was despite only living in Barcelona for only 3 years. He’s originally American and lived in many different countries. He knows every location in Barcelona well and showed us where we should hang out at night, where good bars are, where there’s really recommended food, delis and more during the tour. The people on the tour with us were super nice and there was a fun and light atmosphere. 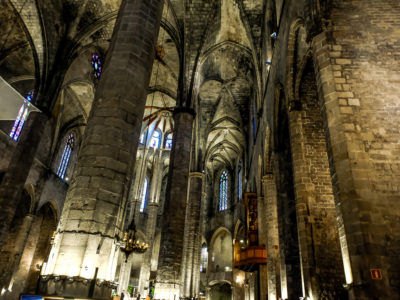 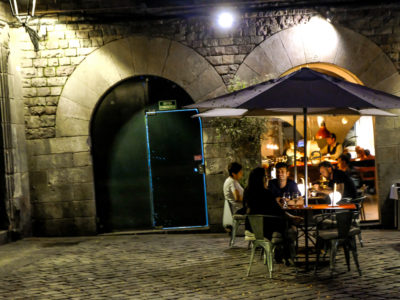 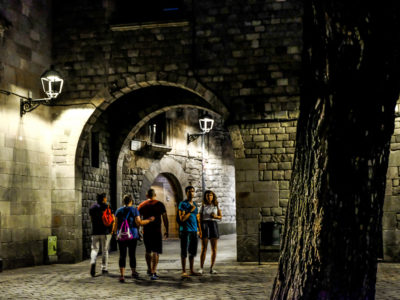 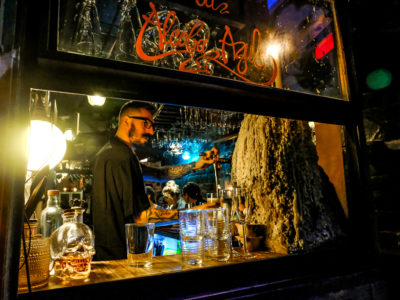 This was my third time in Barcelona and I must say I wasn’t incredibly impressed by it, I found it very touristic and commercialized, but this tour made me realize I simply hadb’t visited the right places. Adrian managed to show us the authentic Barcelona with its unique, hidden locations, the goth quarter was very magical in my eyes, full of alleyways with cool bars, modern little cafés and different boutique shops.
If you want to fall in love with Barcelona, I highly recommend this  tour which will allow you to experience Barcelona through an experienced local guide who’s full of knowledge and affection for it. 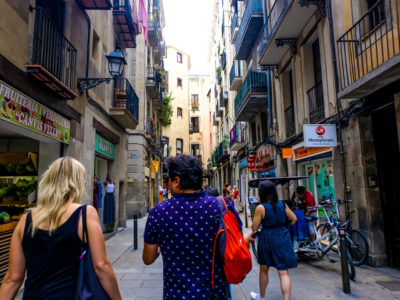 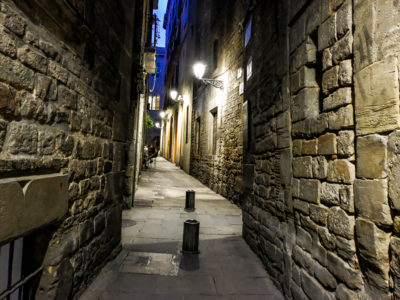 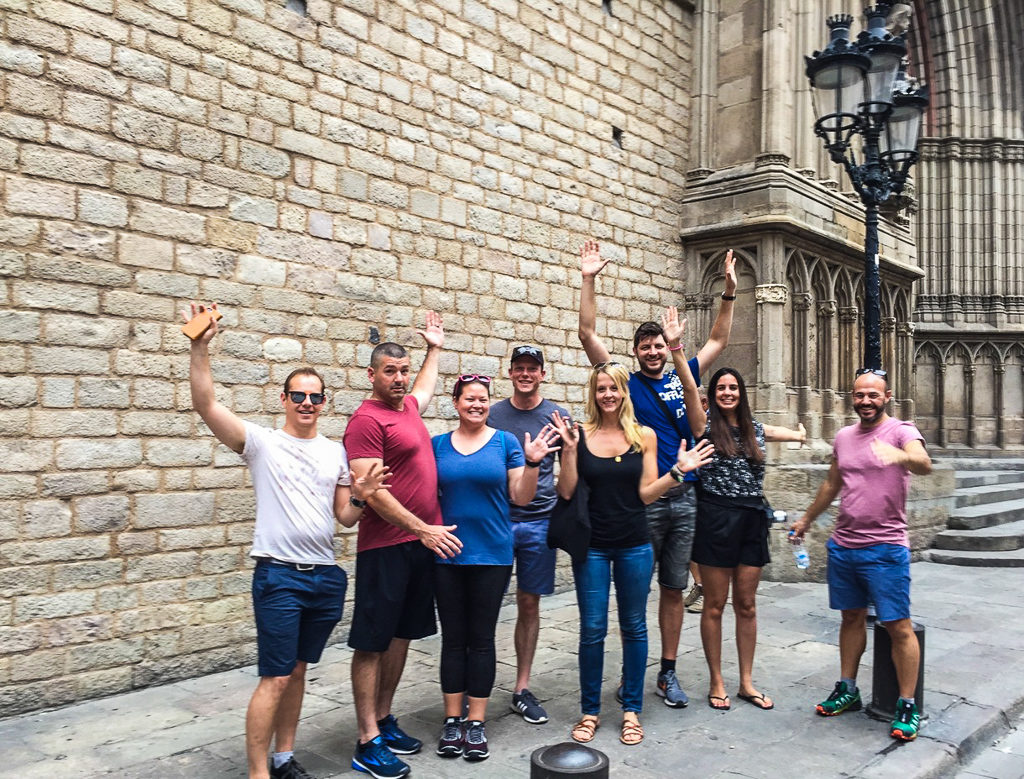 Notes on the food tour in Barcelona

We are Nofar and Roman, and we are travel bloggers from Israel. About two years ago we both quit our jobs so we can start traveling. Our motto is “Combining the good life with local experiences” We enjoy the good life! But unlike all the other luxury travelers, we think a trip cannot be complete without trying some local experiences. Nothing like returning to a 5-stars hotel after a 5-hour walk in the mountains!
Continue reading About Us