Before the flight to Budapest with my mom, I decided to look for a quality food tour for us. I enjoy food tours immensely, since it’s a good way to see the city, taste local foods and learn of the region’s history and culture. After much searching I found the Taste Hungary company which offers a tour that looked really thought out and decided it’ll be great for our trip. The tour included a tour of the large market, a tour of town and wine tastings.

I can already summarize and tell you it was really good.
The tour was supposed to last for 4 hours, but ended up being closer to 5 and is definitely the most extensive food tour I’ve ever been on, with most things included. I recommend saving yourself half a day for the tour, as you might well want to rest after it’s done. The tour s a lot of fun and György , the guide, was really lovely. Our group was very nice as well, and we finished the tour feeling like we got to experience and learn a lot about Budapest.

Starting with a tour of the market

We did the tour on Saturday (Middle of October), and it started in the large market at 10:00am. We met our guide, György , and the rest of the group. Two more couples and a girl, all from the USA. Each of us received a water bottle and we began the tour.

Our first stop was for a drink made from 47 plants and spices, it was actually really strong and tasted like syrup, but it’s supposed to be really healthy for you, so we drank it. To pass the flavor we got to try Langos, a famous Hungarian dish which looks like a flat doughnut with sweet or sour toppings, we tried the classic style with cream cheese and grated cheese on top. 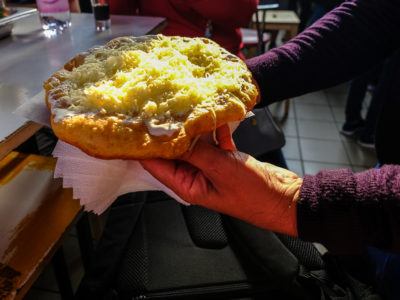 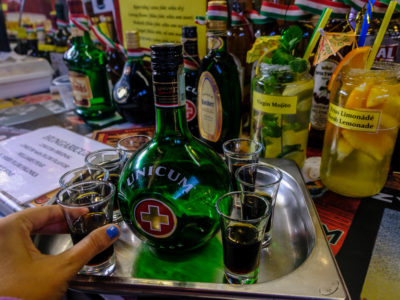 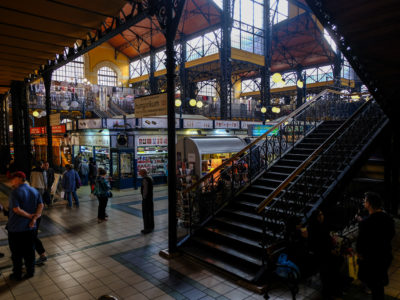 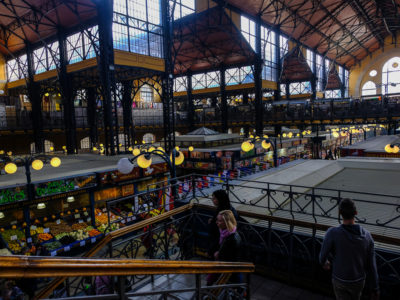 We then continued on an extensive tour of the market. We were in the market for about two hours and György  stopped by chosen stalls and told us about the history of each food and why it’s eaten in Hungary today. Here are two short stories. In the past, sugar was really expensive and only the rich could afford it, so the poor looked for cheap sweetening solutions and began to use honey. Also, the pork sausages are supposed to be white or grey but are red in Hungary. Why? Because of the famous red paprika in Hungary. Besides giving the sausage a unique flavor, it helps preserve it and kills bacteria.

We passed stalls of meat, spice, vegetable, cheese and more. At some point we stopped to try sausages. We each got a plate with many types of sausage and György explained every type before we tried it. From there we went down to the basement level (Did you know there was one? Apparently, the market has 3 floors and most people only know 2).

On the basement floor there are fish and pickles and if you like pickles you shouldn’t miss this one. At first, we stopped by a map of Hungary and discovered that Hungary is considered one of the best wine producers. Most people aren’t aware of the fact, since most Hungarian wine is used locally and isn’t exported to other countries. They have 22 different wine making regions!
Afterwards we tried different pickles (Yum). I really like pickles and there were special ones there, like pickled Shallots and prunes. 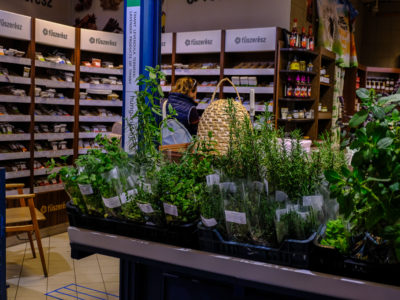 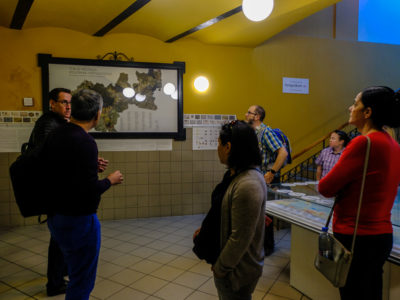 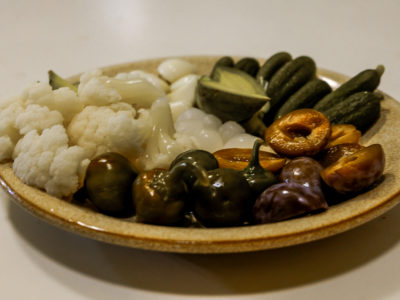 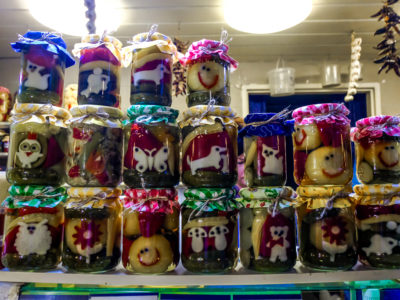 Food tour in the city

We finished the market tour and went on into town. We had perfect sunny weather, and walking the streets was very fun. György led us through pretty, less touristic alleyways and at some point we stopped to try gourmet chocolate in different, special flavors like chocolate with cardamom, plum chocolate, passion fruit chocolate and more. Everyone chose two flavors to try.
From there we moved on to a local Hungarian restaurant and ate like the Hungarians outside, standing by a long table 🙂

We began the meal with Hungarian soup with meat, carrots and potatoes and of course a lot of paprika. György then brought large plates with many kinds of meat and sides and put something new on our plates every time, while telling us the story of the dish and how it’s prepared. There were three kinds of sausage, schnitzel, a chicken roulade filled with cheese, puree, slaw and mustard salad. We also drank local beer.
It’s unnecessary to mention that at this point we were all quite full. 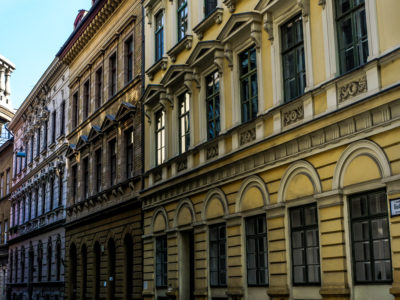 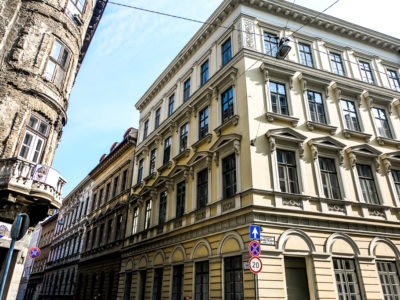 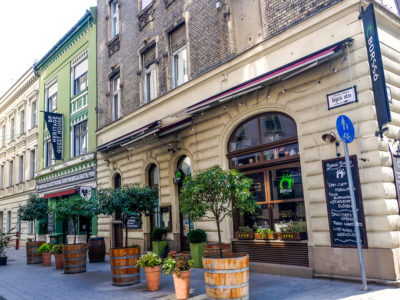 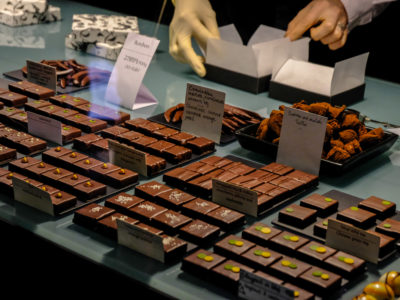 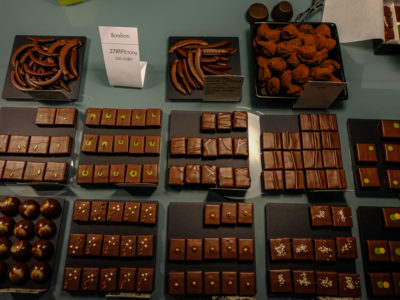 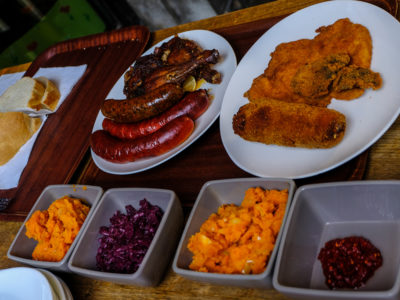 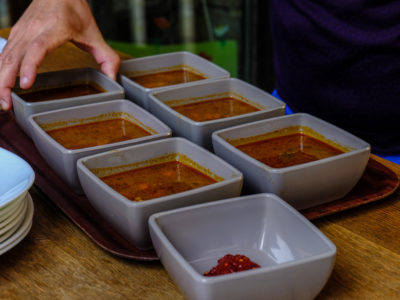 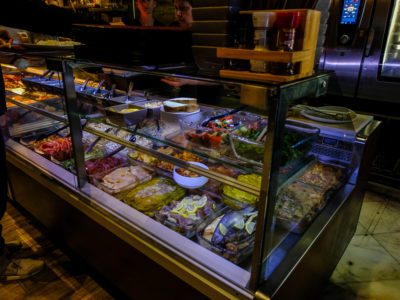 After the great, huge meal we went to a lucrative café with used to be frequented by writers and inventors and host business meetings. This café is known for its impressive design and its great Hungarian cakes. We sat by a table and ordered whatever coffee we wanted. We additionally got two cakes. I passed on the cake stage, because I felt really full and I have to admit I don’t like cakes of this variety as much (Yes, I know I’m in the minority, but I prefer simple cakes like cheese or apple cakes). 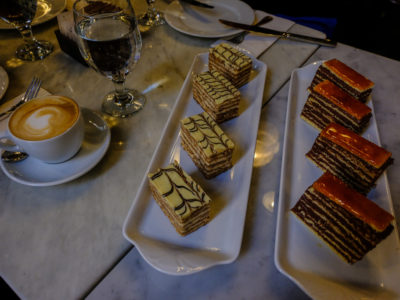 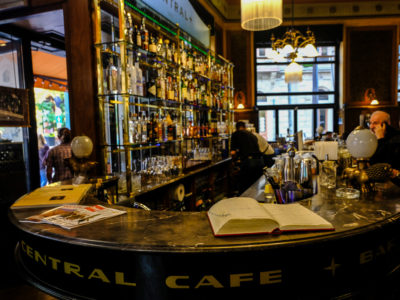 Yes, I’m still going on about the same food tour 🙂 After coffee we moved on to a beautiful wine cellar where three wine glasses were waiting for us, plates with three different cheeses, pumpkin oil dip and two breads. At first, the sommelier poured red and white wines for us and explained which cheese goes with which wine, he then explained the Hungarian wine world to us.

He showed us a map of the regions and explained each one’s specialty.  Apparently, they began producing wine in the first century (Perhaps even earlier, though there isn’t evidence of it)

The final wine we tried was sweet wine from the Tokaji region. It’s the only region which produces this kind of wine, as it entails hard manual work of collecting the proper grapes one by one. This wine is famous because kind Louis the 15th tried it and crowned it “The wine of kings”. That made it a famous wine around the world and one of the only exported Hungarian wines.

I don’t like sweet wine as much, but the red and white wines were great. I actually really liked the red wine and the smoked cheese and was happy to discover that you can purchase it at the end of the tour. We also received a 10% discount on all the wine cellar’s products. So, after the tour, I bought a bottle of wine, cheeses, paprika and pumpkin seeds oil 🙂 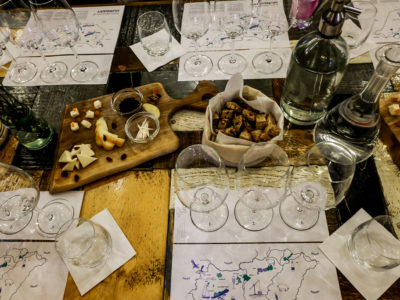 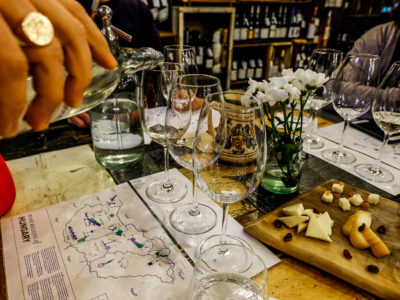 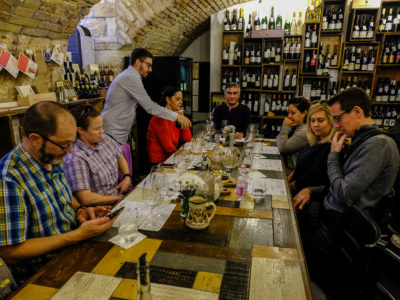 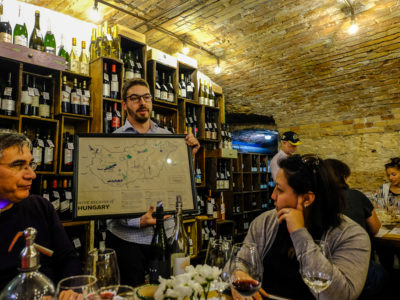 In summary, as you must have noticed by now, the tour we went on was really extensive. While it isn’t cheap, I think you definitely get your money’s worth. I felt like I was on three tours rather than one. The market tour with three food tastings, then a tour of the city with chocolates, a full Hungarian meal and coffee with cakes and finally wine and cheese tastings.

If you’re looking for a culinary tour, full of experiences and historic information and stories of the Hungarian culture. I’m sure this tour will live up to your expectations and even surpass them.

Notes about the food tour

The tour was part of a cooperation with the company.