Before coming to Thailand, I hadn’t imagined a bike tour to be one of the activities we’d end up going on, but then I found a tour which included riding through non-touristic areas, as well as a small island in Bangkok with a jungle!!! Sounds cool, doesn’t it? I booked the tour through Bangkok Bike Adventure, the tour itself is called Green Bike Tour.

The tour leaves at 08:00 and the meet point is at the entrance to a restaurant of a prestigious hotel. We arrived by cab and didn’t have time to have breakfast or coffee, so we were glad to be meeting by a restaurant. We arrived a few minutes early and ordered a coffee straight away, that was we could start the morning off right. Our guide, Mas, came and told us about the tour’s route. She was really nice and patient. We were a very small group including Roman and I and a girl from Germany. The bikes were set up for us near the restaurant and Mas told us we can leave any unnecessary equipment at the hotel for safe-keeping.

Ride through the city

We each got a small water bottle and off we went. We started the tour within the city itself. Anyone who knows Bangkok knows it isn’t the most sympathetic city to ride through as there aren’t any bike trails, the sidewalk is crowded by people and the roads are full of cars, mopeds and bikes – but Mas rode slowly and made sure we were following her at all times. If you go slow and careful, there’s nothing to worry about. Plus, the drivers are used to having bikers on the side of the road and pay attention to it. This part of the ride was less pleasant but it’s relatively short and before long we arrived at a lovely park. The park had comfortable trails for riding and we could stop and take photos. 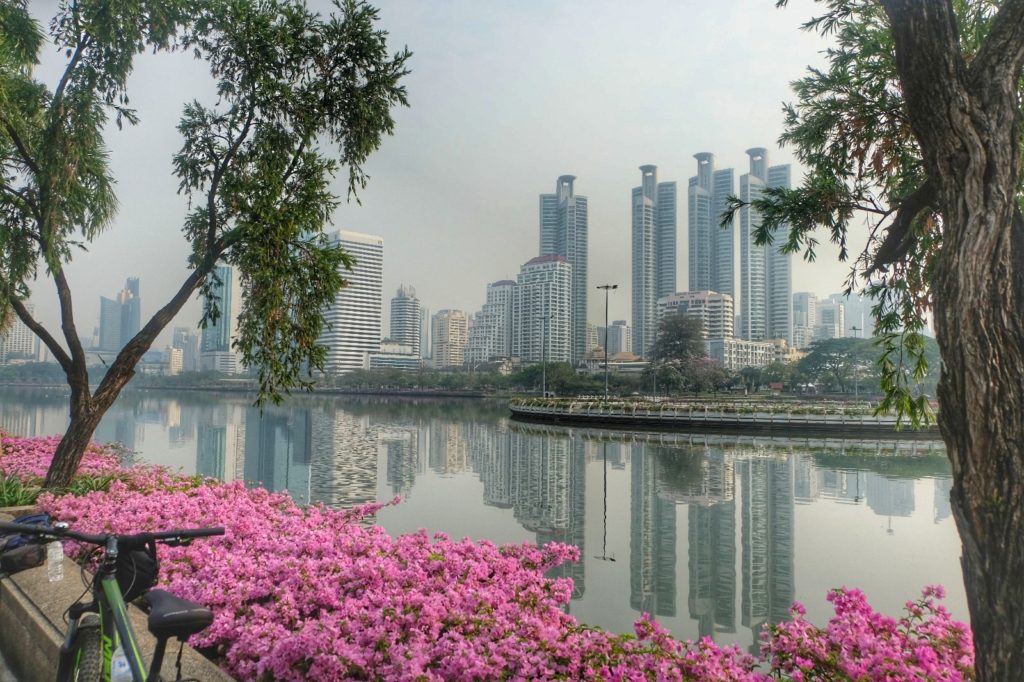 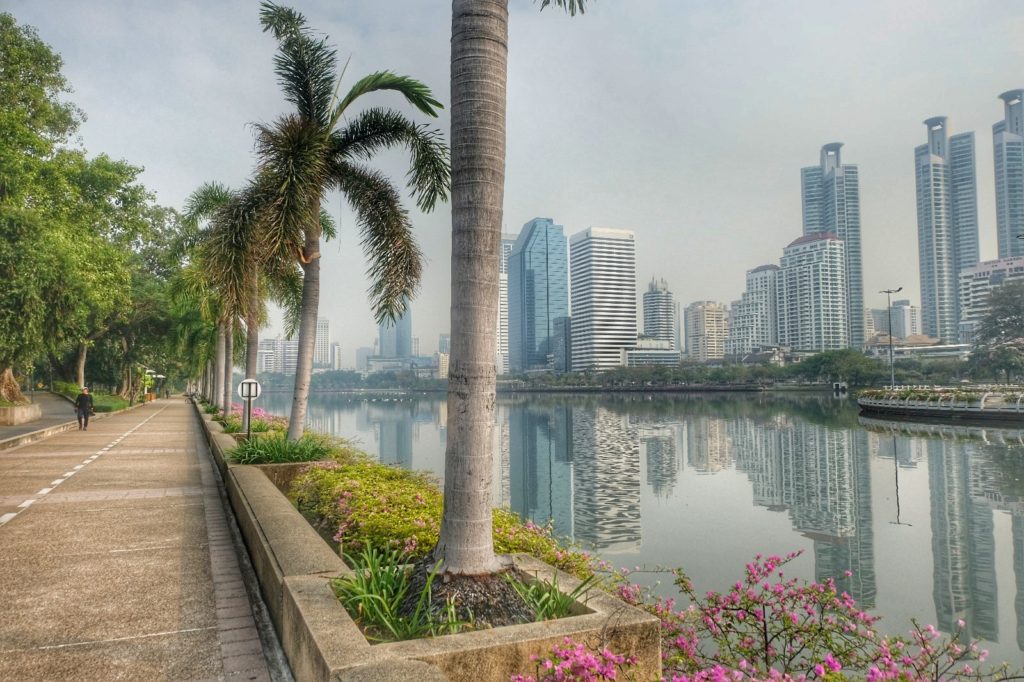 After the park we continued to the poorer area, which is less touristic and if not for this tour – chances are you wouldn’t get to see it. There we could see the local lifestyle and it was a nice local experience. We also passed through the local market and haven’t seen a single tourist. The market is a real local experience and could be a bit extreme from someone’s first time in Asia.

They sell everything there, meaning there’s a meat and animal section. If you’re sensitive to smells or vegan/vegetarian, it’s important to be aware of. You may be able to ask to go around the market and not through it, but whoever would like to see a local market will enjoy this opportunity. 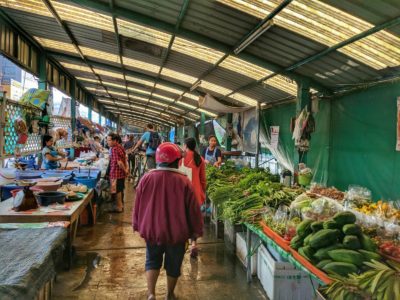 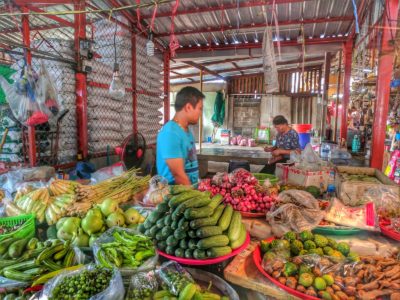 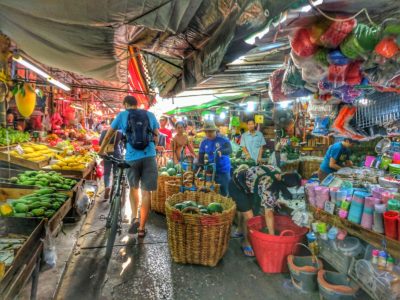 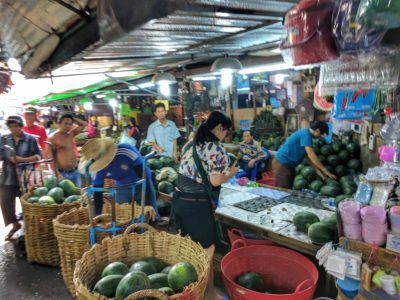 Riding on the island and in the jungle

After the market we rode on through the slums and arrived at a small pier, where we took a boat to the island. We put the bikes in the boat and arrived at the island within a few minutes. This was our favorite part of the tour, the ride at the island the jungle itself – Where we could ride without worrying about cards or people.

Mas said the weekends are more crowded, as there is a market and many locals come there – So the tour is recommended during weekdays. The ride was really fun, and we stopped occasionally to take pictures. At one point we arrived at a lake and Mas gave us some fish food to feed the fish. It’s a no-fishing zone and the fish there get plenty of food 🙂 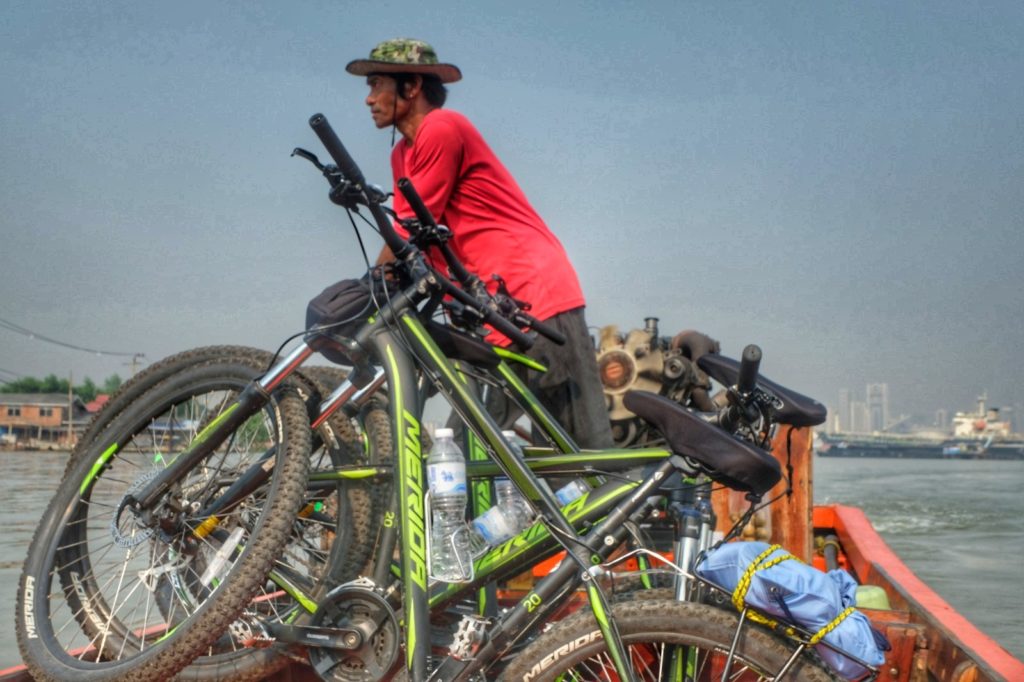 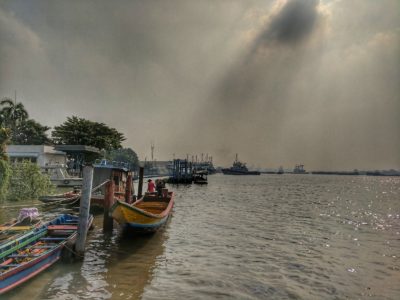 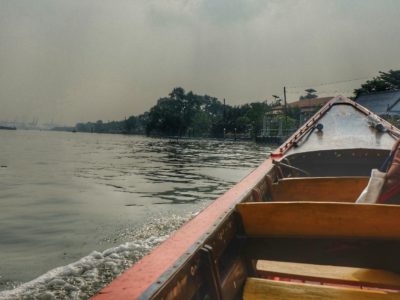 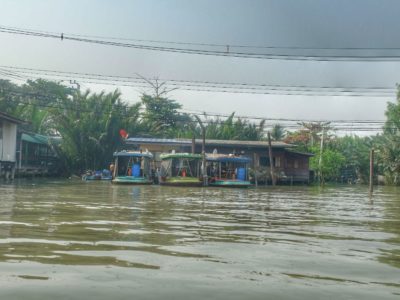 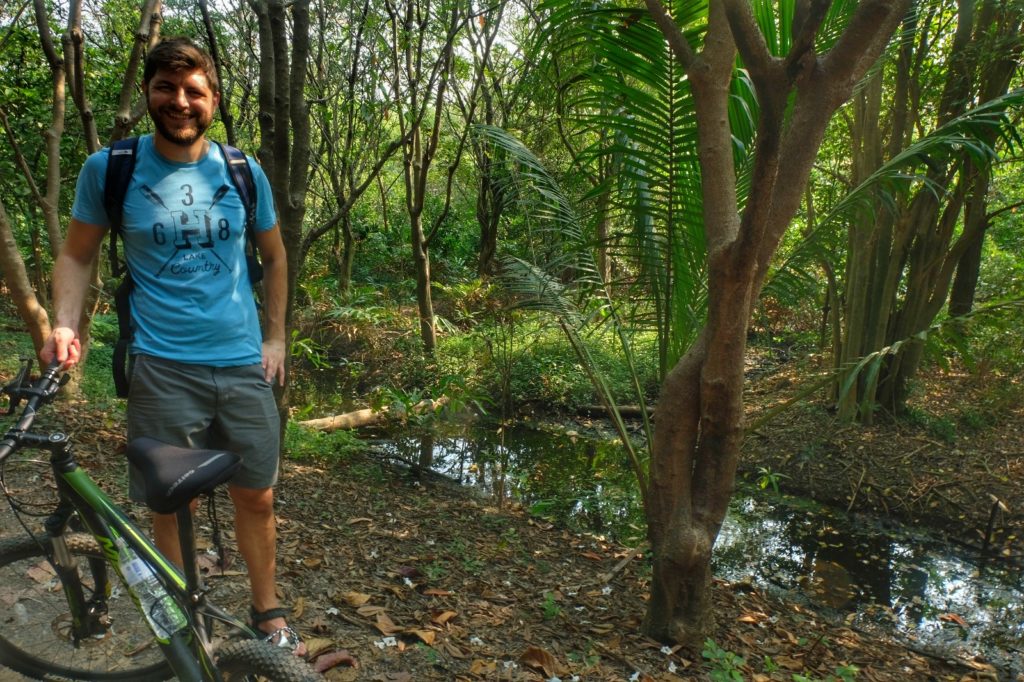 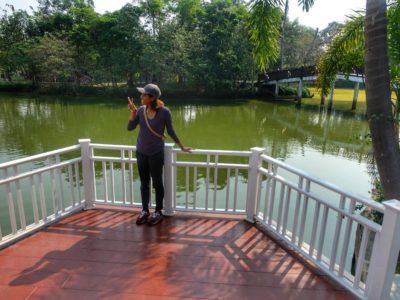 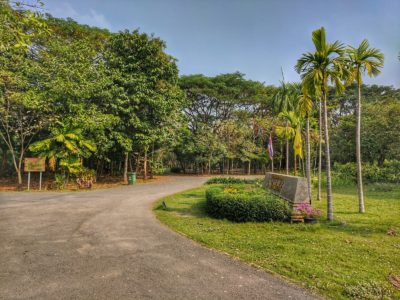 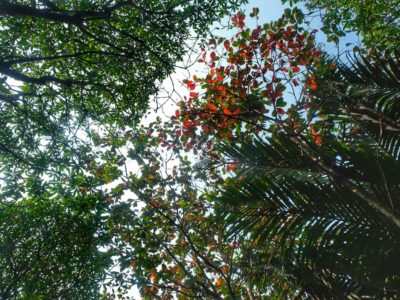 We moved on to a refreshment stop at a small grocery store in the midst of the jungle. Mas gave us some more water (You can have a soda if you’d like), there was a bathroom and Mas also brought a fruit she bought at the market (One we hadn’t tried previously, it’s flavor is reminiscent of a Lychee). So, we ate from the fruit (She brought a large amount), drank water and rested for a while.

After the break, which was very refreshing, we rode on. This time the ride took place along roads that were quite narrow, so we had to ride carefully and didn’t take as many pictures as Roman had before that. Eventually, we arrived at a temple. By that time, we had exited the jungle and were riding across the island itself. Anyone looking for a calm and relaxed place to be, this is the perfect escape from clamorous Bangkok. 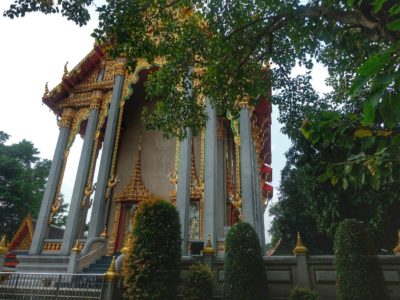 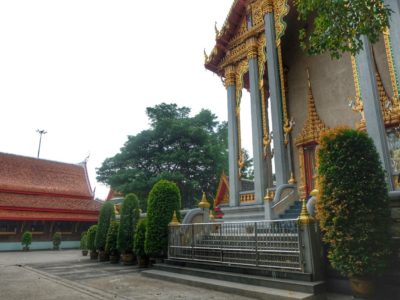 After visiting the temple, we arrived at a local restaurant for lunch.  That morning, before riding out, Mas asked us if there are certain foods we avoid, so if you have any food intolerances – you’ll find letting her know to be no problem and she’ll order the dishes in accordance to your wishes.

We got center-table coconut milk soup with chicken and vegetables, tofu with tomatoes and Omlette with rice and pork. The soup and tofu were really well done and filling, too. It was a light meal, which was for the best, as we still had more riding to do and didn’t want to be stuffed. Of course, if you’d want more food, that’s also no problem – Roman wanted more rice for example 🙂 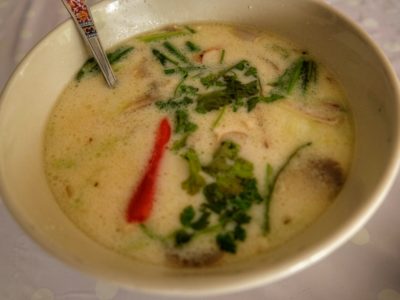 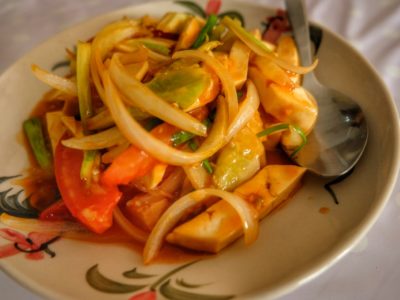 After the meal we went back to the pier. It was a short ride, following which we boarded the boat again. It took us perhaps 20 minutes to return to the hotel, since we took a shortcut instead of going the Way we had come.

We got back to the hotel around 1PM. The track was 19km. When we arrived at the hotel, we went to the restaurant and Mas brought more water and wet towels and told us we could stay for as long as wanted. 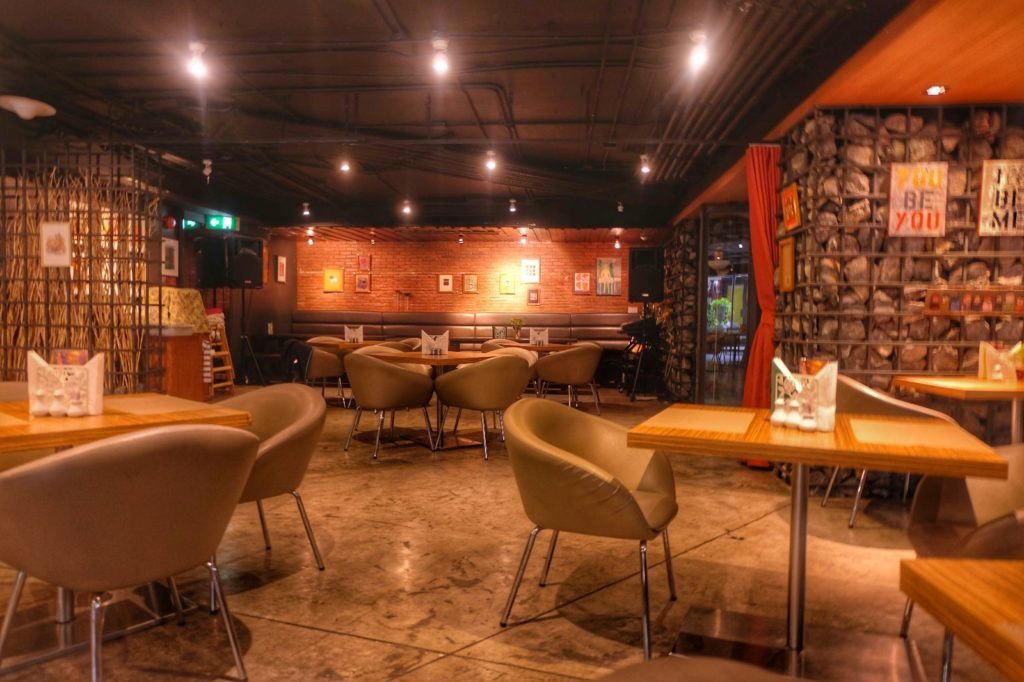