Berlin is an awesome city to explore and tours are a great way to see it from different angles. I chose some unique tours and I did many of them because I traveled alone and it was a great way to meet other people. I stayed at the Circus Hostel, which was a great and also offered tours.

I must admit that I’m more of a wine and cocktail person and less a beer one, but I love to learn about the drink’s history and how they make it and I love to try new things. So when I saw that there’s a beer tour that includes tasting unique beers and that you can learn about the beer’s history, I decided to give it a try.

The tour was through the company Sandemans Europe (I had already done a great tour with them in Jerusalem, in Israel). The tour starts at 6pm.

We were a pretty small group of only seven people and the guide. The guide was from Chile and already from the beginning I liked him. Because he started to tell interesting facts about beer and to ask us questions that no one knew the answer to, like, in which country do people consume the most beer?

Turns out it’s in the Czech Republic (surprising, isn’t it?).

During the tour we passed through old breweries and tasted different kinds of beers. We learned about the preparation process and the things you can learn about beer before you even taste it. The tour was easy-going and fun, and the other guys were super nice.

The tour lasted 3 hours and we finished it in a cool bar with great music and special beers, like strawberry beer which was really good. Also when the tour ended, we all stayed there to drink and afterwards went to eat something.

The tour was really awesome and I really liked hanging out with the other participants. I highly recommend this tour even if you are not a big beer drinker. 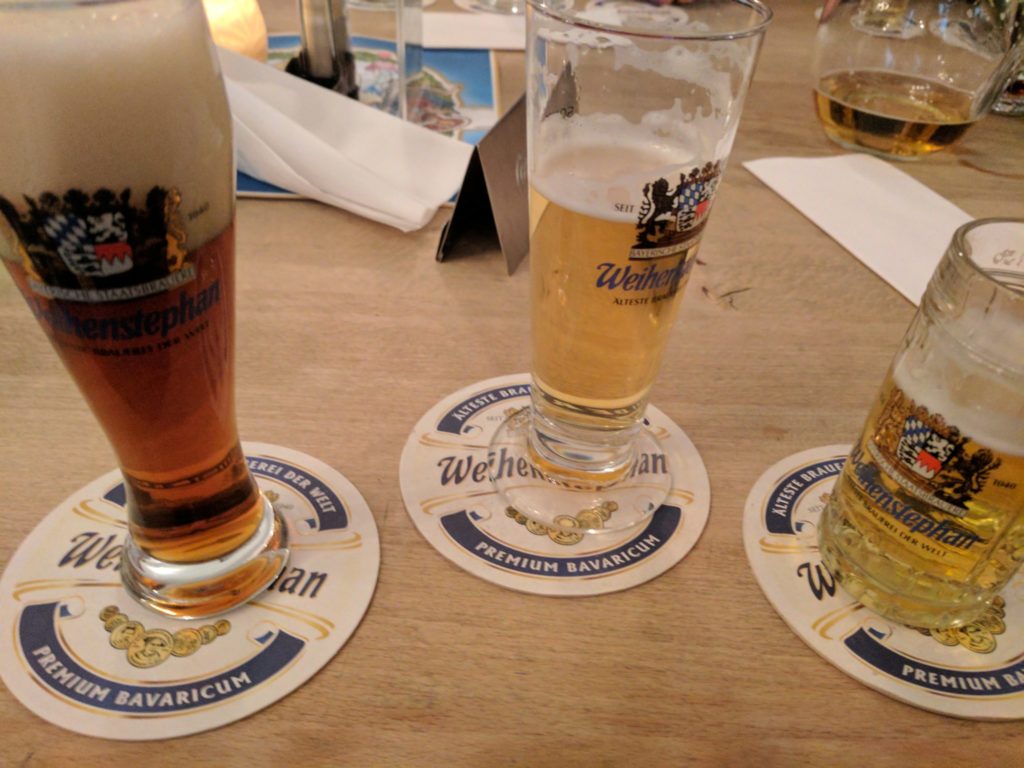 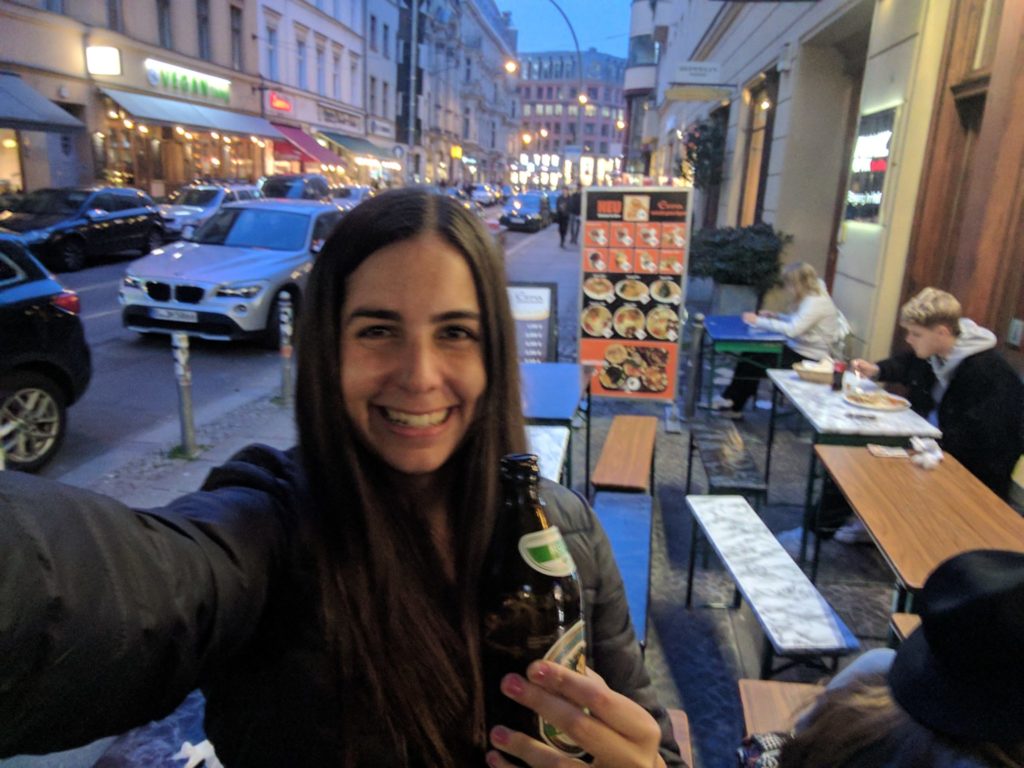 I did this tour through the BiteMojo Application. This app offers self-guided food tours and the price included the food (5 different dishes). They offer this tour in some big cities in Europe.

In the beginning I looked for a group food tour but the prices were too expensive for me, until I found this kind of tour, which’s prices were much more affordable and it sounded like a nice experience.

The tour is through a map which directs you each time to a new landmark. Some of the landmarks are really cool places like hidden courtyards or special shops and some are restaurants or food stalls where you get a dish to taste.

When I started the tour, for a moment I thought that maybe it was not such a good concept for a tour, but after a few minutes I really got into the experience and it became so enjoyable.

I felt like I was in a game looking for a treasure and every time I arrived to a new landmark I was very excited.

About each landmark you can read in the app a short description as well as of the dish you try. All the dishes (bites) were yummy and I even had a wine tasting in one place and a coffee with dessert in the last stop.

BiteMojo offers some different food tours in Berlin. I chose the one in the Kreuzberg neighborhood, because the bites looked good and it was a neighborhood that I wanted to explore.

This is a great tour to do with other people or alone. The tour was about 3 hours and I recommend to come hungry and with comfortable shoes for this tour. 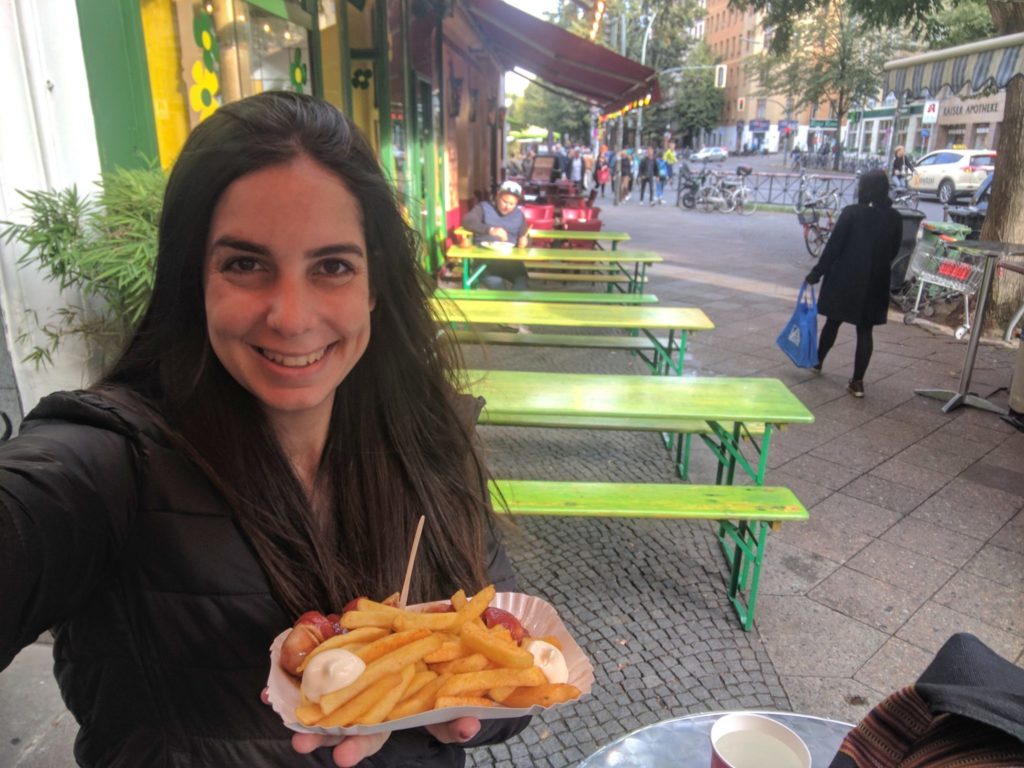 The last time that I’d been in Berlin it was with Roman in the winter and we did the free tour in order to get to know the city and learn about its history. This time I traveled alone and I wanted to see the sights on a bike. The tour was through the company Berlin on Bikes and I booked it from the website Get your guide.

I was a little bit worried about the bikes tour because I thought that the roads would be too crowded but it turns out that Berlin is a great city for cycling. Most areas have cycling trails and, if not, you can cycle on the road and there are not too many cars, especially during the weekend.

The tour included stopping in some of the most famous sights in Berlin and at each spot that we stopped, the guide told us about the place.

We were a group of 12 people and in the middle of the tour we had a break in a coffee shop which was nice.

The tour was supposed to last 3.5 hours but on the way back we ran into a huge parade against racism (which was a fascinating thing to see), so many roads were closed and the guide had to take us through improvised ways back, so the tour was about 4 hours. But I can’t complain about having to cycle more, it was so much fun.

The cycling is mostly on flat roads and there are many stops, but if you are not used to riding, it could be too hard for you. The tour was very interesting and fun. The bikes are well-maintained and easy for riding. If you are a cycling lover I’m sure you will love this tour. 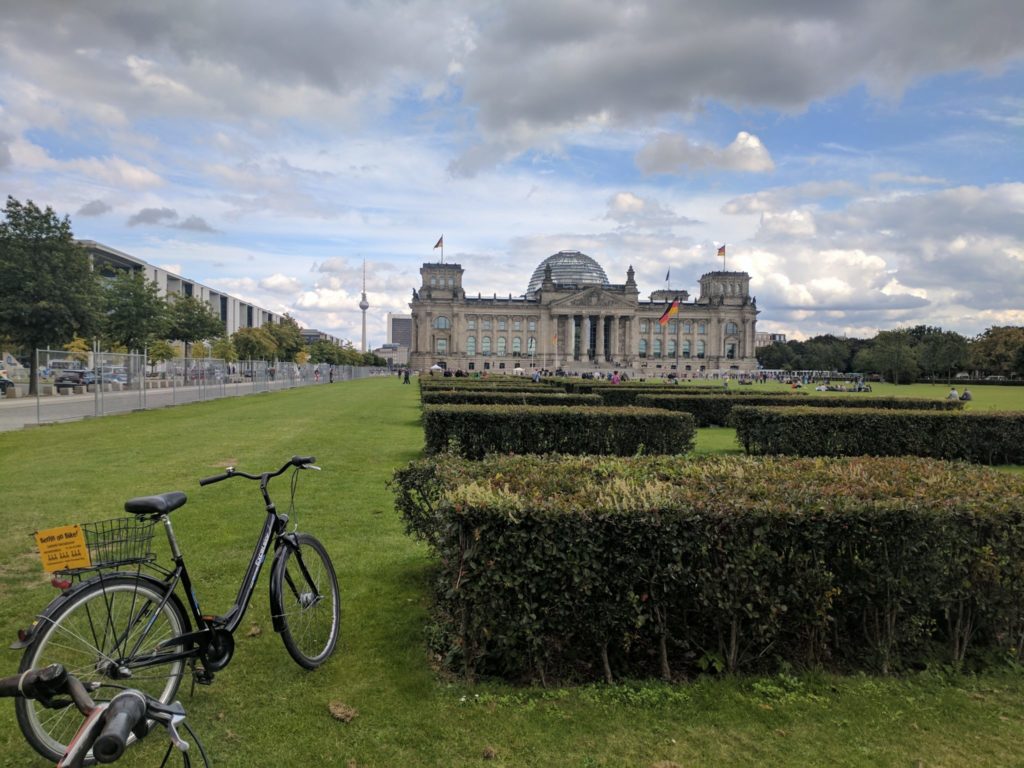 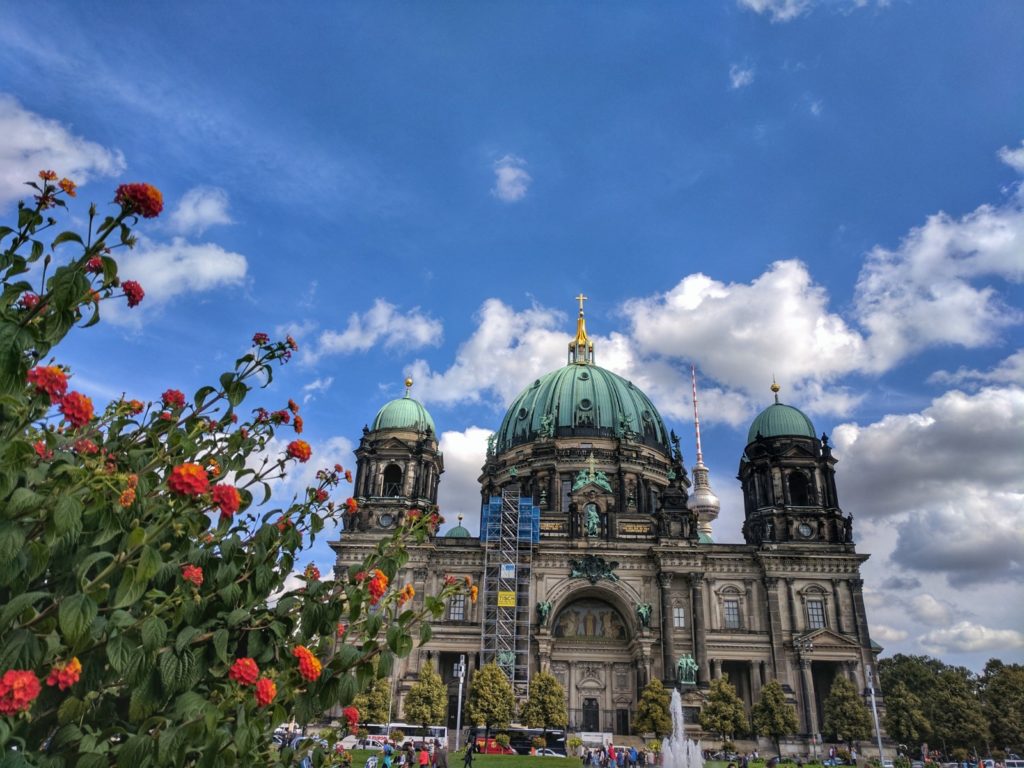 I booked this tour through the local Guddy website. It’s a great site that offers different types of tour with local people; it’s not with a guide from a company but with someone that’s a local.

I saw a tour to abandoned places in Berlin and read good reviews about it on this site. It sounded interesting and was also a type of tour that I hadn’t done before.

After I booked it, the guide contacted me and we scheduled a time and meeting point. The guide’s name was Anka and she is a lovely girl from Poland that moved to Berlin 2 years ago and knows all the hidden and special places in Berlin well.

We took a train together to the first location, which was an abandoned hospital. There was supposed to be a gap in the fence bit it was shot out, so we had to climb up the fence in order to enter. The hospital itself was huge and it took us more than an hour to wander through all its rooms. There were some that had really unique graffiti and street art.

I had never been in a place like this before. Anka knew it very well, and without her I’m sure that I would have gotten lost. 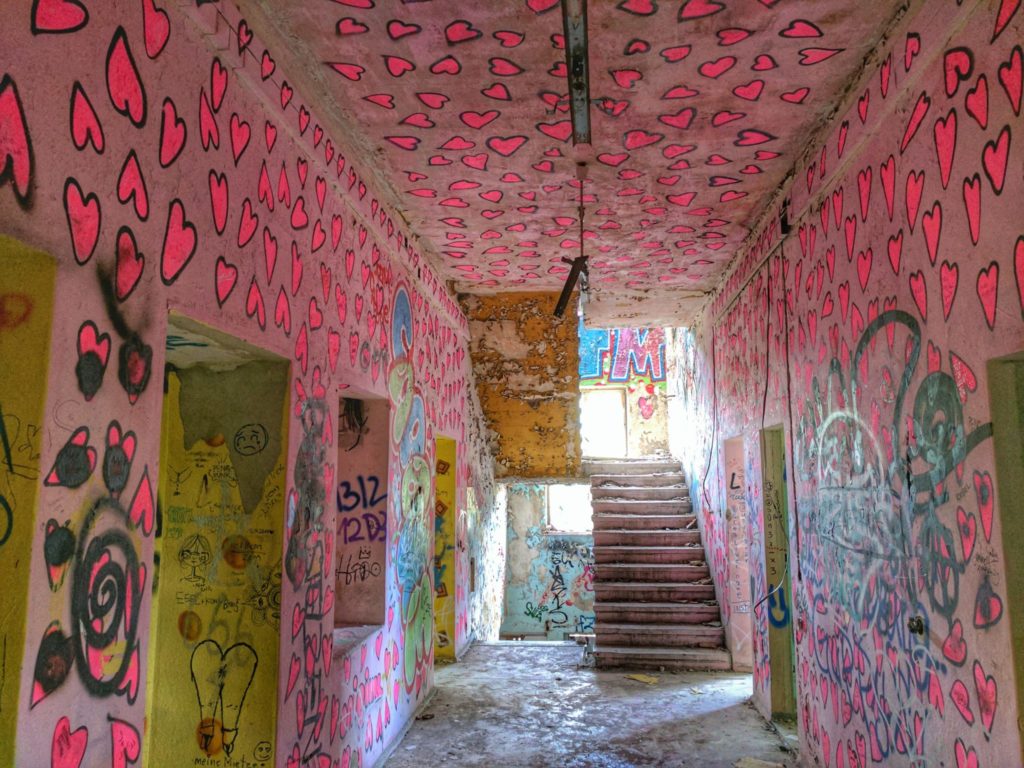 We also visited a place that was an abandoned anatomy institute. There we managed to enter through the fence somehow. This place was super cool and I was a little bit nervous because they used to operate bodies there and the thought of it scared me a little bit. Luckily, we went during day hours because I’m pretty sure it is haunted.

The tour lasted more than 4 hours and I had a really nice time with Anka. It felt like hanging out with a friend.

I think that a tour with someone local is a more special and different experience than an organized tour by a company. It’s important to remember that the guide doesn’t necessarily have experience in guiding but it’s someone that likes to show around the city and share with you the way they see it.

The tour to the abandoned places fits people who are adventurous, who like graffiti and street art, and those who like to explore unconventional places. It’s very important to go with comfortable shoes with a thick sole because there are many fragments of glass on the floors in the abandoned places. I liked this tour a lot and also managed to take some awesome photos. 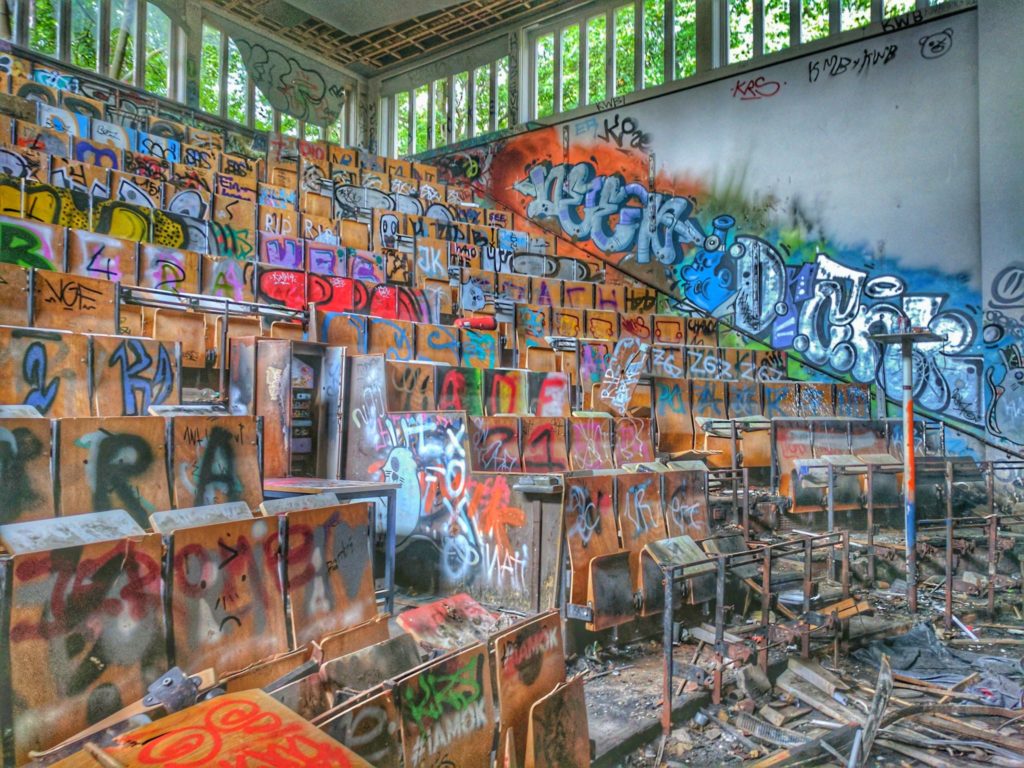